Caked blood stemming from a week-old cut stained my friend Adam’s trail-running shoes. A swath of gauze and tape on his lower leg appeared to hold the laceration together. As we laced up our shoes at the trailhead, I wondered if the impairment would slow down the indefatigable mountain runner. A short, wooly man in his mid-20s with stringy, muscular stature, he romps around 12,000-foot mountains like a sprightly pup on a Sunday jog.

Inside, I half hoped his injury would take him down just a notch, as running with him generally involves a lashing of the legs and lungs.

Two hours later, well into our run, we were surrounded by the lush forestry, peppered with cliff bands and scattered waterfalls of the Primrose Cirque, a gradual half moon of jagged topography that held us like a behemoth glove. If Adam was hurting, he didn’t show it. At all.

“See that rock face?” he said, gesturing emphatically. “It has excellent climbing. Or, in winter, you can skin up the looker’s right flank for nice turns, but look out for avalanche danger in early to mid-winter …” He relayed these details to me in his typical lisp-riddled staccato, illuminating his exploits on this four-season alpine playground.

We were running Mount Timpanogos, or “Timp,” as it’s locally known, just east of American Fork, Utah, and under an hour’s drive south of Salt Lake City. At 11,752 feet, it’s the second tallest peak in the Wasatch Range, and its wide profile makes it appear as a half dozen mountains wrapped in one. The dizzying span of geography and challenging routes on Timp make for a brilliant day trip to escape the city.

Starting at the Timpooneke trailhead, we had run five flat miles of connector trails to reach the Aspen Grove Trail, which led us up toward the Primrose Cirque. Along the way, we cruised past aspens, chokecherry bushes, bluebells and Indian paintbrush.

Once we started uphill again from the Primrose Cirque, the incline didn’t back off until we reached the basin at Emerald Lake, a wide, flat bench two miles later. A few scraps of snow clung to the glacier feeding the lake. There at 10,300 feet, the summit massif showed off an almost 1,500-foot wall of pure vertical relief, with a layered display of limestone, quartzite and shale. We squinted to make out a shelter marking the summit on the edge of a precipice.

Adam launched into a rant on the limitations of gym workouts, saying, “There’s no simpler, better way to get stronger than running in the mountains.”

The trail soon disintegrated into a rock scramble, forcing a walk. Dried out from a coffee-fueled morning and my amateurish lack of hydration, I bonked. The 19-mile loop run we had planned now seemed overly ambitious. Adam jogged sturdily, and noting the approaching dark clouds, urged me on. Lightning storms are common and we were more than exposed as we ascended the narrow ridgeline.

“Salt, liquids, food,” said Adam. “The balance is paramount. You seem to be down on at least two of those.” Then he started recounting stories of impromptu 50-milers he’d run where he’d bottomed out on all three and lumbered like a zombie for hours.
I dug deep and we made it to the summit shelter and its crystalline views of the craggy, striated Wasatch mountains and, below, deep green forests of limber pine, aspen, Gambel oak and Douglas fir.

As we dove in our seven-mile descent, Adam halted to point out Timp’s 7,000-foot West Face. “Skiing that is on the dream list!” he shouted. “Ski into a sunset over Lake Utah and rip powder to the valley floor!”

Back at the saddle, the route headed north down four plateaus known as the Giant Staircase. Here, a runner’s alpine dream unfolds on a wide, winding, low-angle trail—a gradual profile rarely found in the Wasatch. 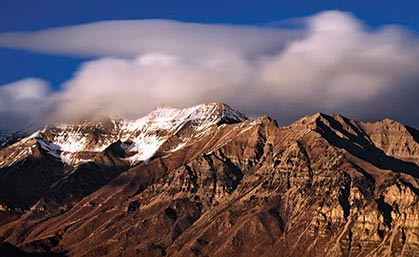 Adam disappeared around a corner down into the thick trees, then surprised me with a shrill, terror-infused holler. I rushed to find that he had run into an adult bull moose, which was quietly munching on low-hanging fruit of the local flora. Trying to recall safe moose etiquette, we conversed with the big guy in a jovial tone as we snuck around his rump.

Grinding through the final few miles, Adam had had enough of my languid pace and jetted. As I lumbered into the parking lot, he sat in the car seeking cell service for a weather update for a potential sunset climb, mind already racing to the next mission.

I was beat. But, as I wheeled the car toward Salt Lake City, I knew that a fix of syrupy sodas and gooey, caloric-rich cheeseburgers would set me back on an even keel.

Seasons
Since snow often lingers until June, summer and fall are best for running. However, temps hit the upper 70s and crowds are enormous during peak summer weekends.

Getting There
Timp is under an hour from Temple Square in Downtown Salt Lake City. Head south on I-15, get off on exit 284 and head east on Highway 92. About eight miles off the freeway is the tollbooth, which charges $6 per vehicle. Continue about another eight miles up the road to the Timpooneke Trailhead just beyond the camping area.

Resources and Guides
Extensive information is available on the Uinta-Wasatch-Cache National Forest’s website. You can also pick up a trail map from the tollbooth.

Camping and Accommodations
Camping is available next to the Mount Timpanogos wilderness area on Forest Service land, until the road shuts down for the winter. Fees apply. Hotels of all prices and styles are available throughout American Fork and more extensively in Salt Lake City.

Refuel
For an American Fork original, head to JCW’s The Burger Boys for a greasy burger—heaven after a long run. If you need a fix of SoCal fast-food magic, there’s an In-N-Out in town as well. If you’re headed back to the big city and want a feel for an honest Utah family-oriented experience, Hires Big H downtown drive-in takes you back in time and has extensive float options.