After pulling off the main road running north from Loomis, Washington, my friend Kevin found himself white knuckling the steering wheel of his Subaru Outback, traversing a slanted, precipitous, dirt mountainside path. We spent the next hour weaving through a labyrinth of unmarked roads searching for the trailhead. Luckily, I’d downloaded a map of the area, and was able to help navigate the matrix of backcountry roads. This was our first fastpacking foray into Washington’s remote Pasayten Wilderness, and it seemed the Pasayten wasn’t going to give up her secrets easily.

Offering up about 600 miles of trail, the Pasayten is home to the most remote wilderness in Washington, and is one of the few areas in the lower-48 to feature arctic-tundra-type terrain. Black bears, moose and bighorn sheep inhabit the area, while wolves and grizzlies occasionally move through. People and water sources are scarce. It was irresistible.

“You realize we may get snow and wake up one morning to find the trail gone, right?” I said to break the driving tension.

“Yeah, but the larches are going to be blooming and the mosquitos will be nonexistent!” said Kevin, optimistically. 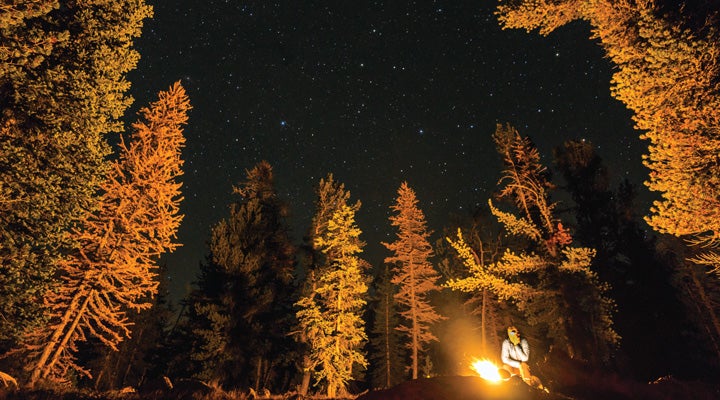 Kevin Pazaski and I met several years ago during a local group trail run in our hometown of Sammamish, Washington, and have been scheming up fastpacking trips ever since. Our mutual love for the mountains, an appreciation for adventure and a shared (slightly mischievous) sense of humor have created a lasting bond. We’ve logged miles in the North Cascades, the Olympics and the Sawtooth Range.

Our intended route in the Pasayten was the 60-mile Cathedral Pass Loop. At the trailhead, we buckled our packs, which weighed in around 20 pounds with food and water included, and soon found ourselves surrounded by golden alpine meadows punctuated by groves of yellow larch trees. Gently sloping rocky mountain tops began to emerge all around, offset by high meadows.

“This place is an alpine wonderland!” I exclaimed. “You could run forever in any direction, and those peaks actually look runnable.”

“We’ve got miles to cover, buddy, but, yeah, this place is definitely worthy.”

Just beyond Horseshoe Basin, we came to the Pasayten’s famous Boundary Trail, which spans the northern edge of Washington and is actually just one section of the 1,200-mile Pacific Northwest National Scenic Trail.

Approaching Teapot Dome, we passed several small streams and spotted a nice clearing just off the trail for our first camp. We took advantage of the lifted fire restrictions, and enjoyed a steady campfire that evening. 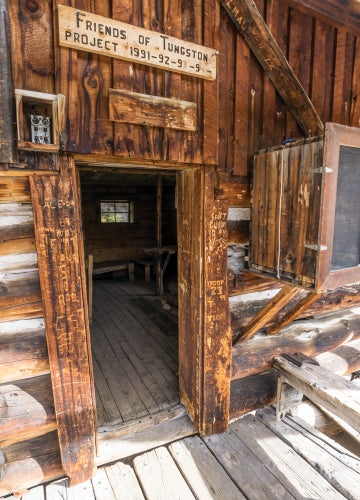 Up and at ’em early the next morning, we prepared for a 50K day, with a feast of eggs, granola and coffee. We enjoyed six-and-a-half miles of gently rolling singletrack on the way toward the long-abandoned Tungsten Mine cabins. At this peculiar outpost, we were struck by the manmade feature in the middle of this remote wilderness. Thousands of Boy Scouts had clearly preceeded us, and had carved their names into the cabins’ ancient logs.

Not long after leaving the Tungsten Mine, mountain vistas really opened up and we were treated to our first views of Cathedral Peak from Apex Pass. Sharp granite peaks punctuated  the horizon, while larch and fallen boulders provided a stunning visual foreground.

Fleeing a quickly materializing snowstorm, we descended 13 miles through an evergreen forest, where we settled in for our second night.

Moving again the next morning, we started a climb toward Topaz Mountain and Windy Peak, as the trail bobbed and weaved just below rocky outcroppings.

With a bit of sadness but a great deal of satisfaction, we began our descent from the high country. Just one short climb at the end of the route and we were back to the trail we’d started on two days before.

Ben Luedke is a trail runner, gear tester, photographer and psychotherapist living in Sammamish, Washington. You can follow him on Instagram at @cascaderunner.