Our tribe loves wild trails through shadowy forests, craggy gullies and wind-swept passes. And sometimes we also love fish tacos, a speedy WIFI connection and decent beer. From the cosmopolitan Big Apple to almost-off-the-grid Mountain View, Arkansas, we’ve deciphered eight rad towns around the United States and Canada that have what it takes to host your on- and off-trail playtime. 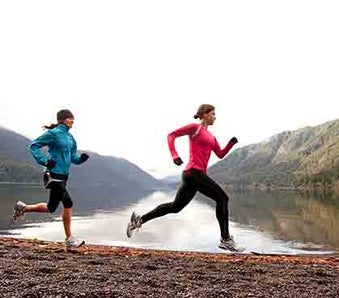 In 1791, Spaniard Francisco de Eliza turned up on what’s now called the Olympic Peninsula, a fat tongue of land separating Puget Sound from the Pacific Ocean. Purportedly, de Eliza dubbed a place where the water was deep and calm at shore the Puerto de Nuestra Señora de los Ángeles. The peninsula had long been the home of multiple Native American tribes, but that Spanish name—and eventually its English iteration—stuck.

While Port Angeles certainly serves as a liaison between land and sea, it also acts as a portal to the rest of the peninsula. Today, the medium-sized town’s economy is predominantly based on service and tourism. Travelers visit Port Angeles and its environs for the coastal environment, rainforests and alpine high country. A massive chunk of these ecosystems is protected as Olympic National Park.

Beyond Port Angeles is a world of trail-running opportunities, and naturalist Greg McCormack, 50, who once lived and worked in the park, has run almost all 600-plus miles of Olympic National Park’s trails. “What can I say? The mountains titillate, fascinate me.” Karen Wiggins is a 53-year-old retired small-business owner from Bremerton, 75 miles southeast of Port Angeles. She’s equally eager, “It’s not a matter of if you see a bear or a big view; it’s how many and how often.” Will you also be inspired?

Get There. The William R. Fairchild International Airport is located in Port Angeles and several flights come and go daily to and from Seattle. From the King County International Airport in Seattle to Port Angeles, drive 80 miles and take a 35-minute Washington State Department of Transportation ferry ride between Seattle and Bainbridge Island. From Seattle’s Sea-Tac Airport, the drive is an easy two-and-a-half hours. Multiple-times-daily ferry service also connects Victoria, British Columbia, and Port Angeles via the Black Ball Ferry Line.

Barnes Creek Trail out-and-back.
Use the trailhead at the Storm King Ranger Station and forge out as far as you like. “Experience verdant lowland forest replete with huge trees, ubiquitous ferns and epiphytes like lichens and mosses,” explains McCormack. “It’s temperate rainforest here, which receives upwards of 13 feet of rain per year!”

Grand Ridge Trail out-and-back.
Park at Deer Park and run up the park’s highest trail to about 6500 feet and on to Obstruction Point before returning the way you came. Says Wiggins, “Take the tiny side trails to vistas. And look up when you reach mile four of this 14.8-mile out-and-back to see Mount Olympus for the first time.” Mount Olympus, with its black peaks peeking out of thick glaciers, looks as much like shark fins in a frothy sea as it does a mountain.

High Divide lollipop (including Seven Lakes Basin).
All three Olympic Peninsula experts—McCormack, Wiggins and Kathleen Egan, a 39-year-old epidemiologist based in Seattle—recommend this 18.2-mile loop, which begins and ends at the end of the Sole Duc River Road. Head up the trail to Sol Duc Falls, then go right. “Run first through an old-growth forest, then into sub-alpine trees and onto Bogachiel Ridge with its views of the Hoh Rain Forest, Mount Olympus, alpine lakes and possibly the Pacific Ocean,” says Egan. “Make time to stop and stare, and to soak in the Sol Duc Hot Springs afterward.”

Lumberjack Endurance Runs 100 Mile, 100K and 50 Mile.
The races occur in April on a 12.5-mile single- and doubletrack loop in Port Gamble, an hour’s drive southeast of Port Angeles. All have good footing and rolling terrain.

North Olympic Discovery Marathon, Half Marathon, 10K and 5K.
These races take place in June on the flat and mostly paved Olympic Discovery Trail. Consider these road races by speed and footing, but trail races because of the rural and remote terrain they cross.

Roots Rock 50K and 25K.
In September, run on the same loop in Port Gamble as the Lumberjack Endurance Runs.