Where history and mountain life collide 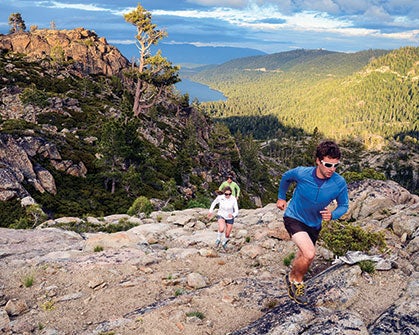 Truckee is a laid-back town with a hyper focus on outdoor sports. “It may  sound cliché, but that’s us,” says 39-year-old, middle-school English teacher, ultrarunner and Truckee resident Gretchen Brugman. The 16,000-person town, located partway up the eastern side of California’s Sierra Nevada, gets stout winters and dry, warm summers. Truckee’s multisport draw centers around the snowmelt-filled Truckee River, the wild and high Sierra Nevada, several nearby ski resorts and the ever-popular waters of Lake Tahoe. “We have so many trails, but trail running definitely remains a minority sport,” explains Brugman.

This casual mountain town and its still- somewhat-unknown trails have a not-so- secret and storied past. Originally inhabited at least seasonally by the Washoe and Paiute Tribes and perhaps other Native Americans, the region became famous when the Donner Party of pioneers became stranded there in the winter of 1846 and 1847. Truckee’s robust history continued and included railway building in the 1860s, ice and wood milling in the late 1800s, the 1915 opening of the Lincoln Highway and Hollywood movie filming in the early 1900s. Truckee’s past is still on display in its downtown historic districts and, thus, part and parcel to its mod mountain vibe.

> GET THERE / Fly into the Reno-Tahoe international airport, 36 miles northeast  of Truckee in Reno, and rent a car for the drive into the mountains. Truckee is served daily by Amtrak’s California Zephyr route and Greyhound buses coming from the east and west. If you arrive by public transport, rent a car in Truckee for your trailhead travels.

> BE A TOURIST / Brugman says you must drop into Wild Cherries Coffee House for a pre- or post-run fill on coffee, treats and other good eats like breakfast sandwiches, paninis and salads. Visit Donner Memorial State Park to learn about the infamous pioneers who overwintered there. Stroll commercial row, Truckee’s historic downtown, and venture deep into Truckee history and, whatever you do, take a day or more to head south and enjoy Lake Tahoe.

> TAKE NOTE / Truckee trail running is definitely a summer activity! Area trails are snow-free late May or early June until the first major snowfall in November.

1846 Year the infamous Donner party of Midwestern pioneers became trapped by bad weather near what’s now Truckee while trying to cross the Sierra Nevada. Only about half of the original 87 pioneers survived the westward journey, and many purportedly did so by resorting to cannibalism.

5817 Elevation, in feet, of Truckee, which sits a short distance east of the Sierra Nevada crest. 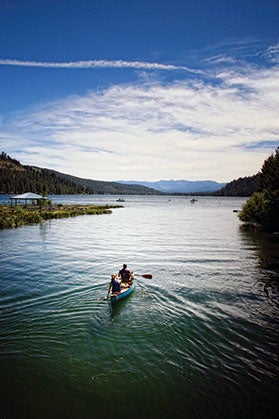 > TRUKEE RUNNING FESTIVAL / A 5k, 10k and half-marathon held in June. The 5k and 10k are held on a paved trail, while the half-marathon ventures onto the singletrack of Waddle Ranch, a 1500-acre swath of the sagebrush-y, rolling Martis Valley east of Truckee
(tahoetrailrunning.com/trail-runs/truckee- running-festival).

> PACIFIC CREST TRAIL / INTERSTATE 80 TO SQAW VALLEY / The long-distance trail passes just eight miles west of Truckee on its way between Canada and Mexico. “For an eight-mile, rolling out-and-back,  I run from where the trail crosses Highway 40 north to interstate 80 at Donner Summit and back,” says Brugman. Her favorite run, though, is on the PCT from Donner Summit to Squaw Valley. “Arrange a car shuttle for this 16-mile, one-way run. This high-country route is the best in the area.”

> DONNER LAKE RIM TRAIL / The Donner Lake Rim Trail remains a work-in-progress, but when it’s complete, it will encompass 23 singletrack miles around Donner lake, just west of Truckee. Most of the miles on the north and west sides of the lake are ready for action.