Bend’s Got the Big Guns 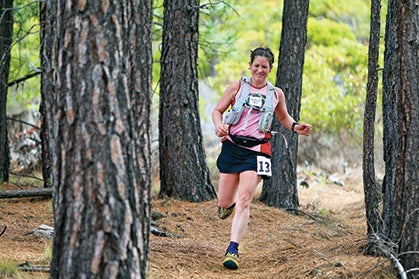 The Bend running scene is, in a word, “Competitive.” That’s according to 29-year-old Stephanie Howe, a runner, coach and instructor at Central Oregon Community College and Oregon State University. “Not only are there dozens of elites living here, but also everyone is an endurance athlete of some sort,” she says. “This is one  of the only places where the high-school cross-country team outnumbers the football team! It is our culture.” In addition to Howe, trail elites residing in the area include Max King, Rod Bien, Mario Mendoza and Jeff Browning.

Named for a bend in the Deschutes River that once made a good crossing point for westward explorers, the region was first a home for Native Americans and second a site for multiple timber mills in the early 20th century. Today, the economy is largely tourism- and recreation-based.

It’s easy to see why trail runners  are attracted to 76,000-person Bend.  From its proximity to the eastern edge of the Cascade Range’s high-altitude  playground, to the town’s mild climate that keeps the low-elevation trails runnable all year, to an insane singletrack network that begins in the city and connects all the way to the high country, to a robust trail-racing schedule, to a river running through town that can be fished and floated, to an evolved craft-brewing culture, Bend’s got the big guns for the good life.

> GET THERE / The clos est airport is the Redmond municipal airport about 17 miles northeast of Bend. Alternatively, it’s a three-hour- fifteen-minute drive from the Portland International Airport. Bend is served by Greyhound, and you can rent a car in town.

> BE A TOURIST / Bend proper has a remarkable nine craft-beer breweries, and they are all a part of the bend ale Trail. Join an ale-trail tour or go independent (and with a DD), but don’t miss Bend’s other best trail.

> TAKE NOTE / While it does snow in town, very little sticks for more than a few days, making trail running  in and near bend possible  all year. But in winter, snow stacks high in the mountains, and they become winter-sports destinations.

3623 Elevation, in feet, of Bend, located on the  east side of the Cascade Range and along the Deschutes River’s south-to-north wending path.

10,000 Elevation, in feet, of the Three Sisters, the prominent peaks in bend’s western viewscape. 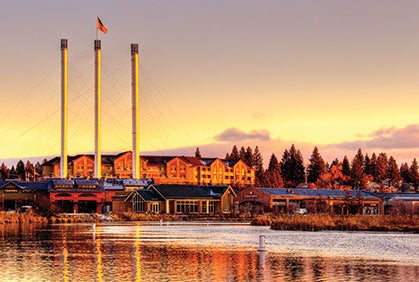 Combine people watching and trail running with either a loop or out-and-back on this downtown Bend trail. “The old mill District is a popular area for paddling or floating  the river, pick-up soccer, beach volleyball, fishing or just hanging out,” says Howe. “Also, the trail turns to single- track within minutes, and you’re winding along the river. Not bad for the heart of town!”

“This is my favorite Bend trail,” says Howe. “You are away from it all up there, immersed in pristine wilderness. It’s pure heaven.” The trail winds up around the Cascade Lakes with stunning views of Mount Bachelor, the Three Sisters and Broken Top Mountain. The trail is only accessible from mid-August through first snows due to its high elevation and an annual elk-calving closure. Park at the Swampy Lakes Trailhead and use the Swampy-Dutchman Tumalo Mountain Connector, the Flagline Access, the Flagline and the Flagline Tie Trails to make a stunning 16.7-mile loop.

> DIRTY HALF / A hyper-competitive, June half-marathon with about 1000 feet of climb taking place on a lollipop of well-used, almost exclusively singletrack just outside of bend (footzonebend.com/dirty_half).

> HAULIN’ ASPEN HALF AND FULL TRAIL MARATHON / Held in August, the half-marathon features about 1000 feet of climb, the marathon has about 2700 and both races run on a mix of singletrack and dirt roads just west of town (haulinaspen.com).

> FLAGLINE 50K / In September and on the flanks of Mount Bachelor, says Howe, “The  race winds its way through the Three Sisters Wilderness, past places like Happy Valley Tumalo Creek and finishes on the area’s nordic trails. Big climbing, big views. Also, a local burrito shop caters the event, so the post-race food is killer.” (flaglinetrailfest.com/flagline-50k).

Can Tech Help You Hack Your Nutrition—and Supercharge Running Performance?