Hit the trails around the town of Mammoth Lakes, California, and you might get passed by some of America’s top distance … 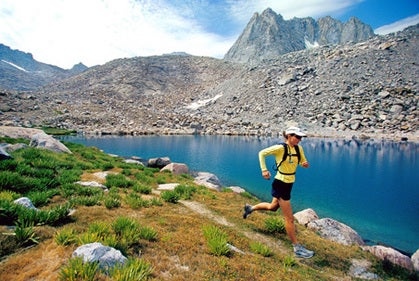 Hit the trails around the town of Mammoth Lakes, California, and you might get passed by some of America’s top distance runners. Olympians Deena Kastor, Meb Keflezighi and their teammates on the Mammoth Track Club spend roughly half their summer training on trails and dirt roads that ring multiple lakes, craters and rugged peaks in the area.

And when the white stuff blankets Mammoth, these pros head to the drier neighboring town of Bishop, about 40 miles south and join it’s growing community of diehard trail runners.

Yosemite National Park to the northwest and Mount Whitney to the south may be more famous, but this region in between, known as the Eastern Sierra, crests like a great wave of chiseled granite across the high desert landscape of the Owens Valley.

The dull-brown valley floor spreads out in a windswept expanse, sprouting shrubs like a stubbly beard, until it hits the edge of the Sierra Nevada range. The Sierra escarpment juts up some 10,000 feet, riddled with countless canyons and peaks. A parallel range, the Inyo-White Mountains, rims the valley’s east side.

In Bishop, trail runners get gear and guidance at Sage To Summit on Main Street. “Bishop is a fastpacking and mountain-running mecca,” says Howie Schwartz, who co-owns the store with his wife, Karen. “You have 14,000-foot peaks on both sides with a 4000-foot valley floor, so year round you can run through varied climate zones and ecosystems—from high desert sage to riparian forest, to sub-alpine aspen groves, to craggy alpine ridgelines.”

Numerous trails in the region cut west over the Sierra Crest and intersect with the John Muir Trail, which runs 211 miles from Mount Whitney to Yosemite Valley. “There’s a lifetime’s worth of trails and dirt roads to explore here,” says Bishop resident and accomplished trail runner Jeff Kozak, who also works at Sage To Summit.

Kozak has competed in countless ultras across California and holds the 50-mile course record (7:06) at Bishop High Sierra Ultramarathons (see below).

Mammoth has developed a reputation as a training ground for elite-level distance runners. How has that affected the Eastern Sierra’s trail-running scene?

Andrew Kastor, Deena’s husband, has had a huge impact on the local running community with his creation of the High Sierra Striders running club. High-profile road runners expounding the virtues of trail running in their training programs is a big plus, but the main reason trail running is growing in this area is it’s countless, unbelievable trails.

Is there a real trail-running “community”?

There are a few hardcore trail runners doing their own thing, but there is a cohesive running community. The High Sierra Striders based out of Mammoth is one hub, and Sage To Summit in Bishop is another. Each supports the other and its events.

What’s the thing you do called “run and bag” all about?

“Run and bag” combines running and peak bagging. Many peaks in the Sierra have fairly easy Class-2 to-3 routes, so you can summit in your running shoes even if there is very little rock climber in your repertoire. And you can throw in a biking component for a “bike and run and bag” adventure.

One of my favorite routes is to road bike from Bishop at 4200 feet up to South Lake [22 miles, 5500-foot ascent], run to Bishop Pass at 12,000 feet [six miles], then scramble the final 2000 feet of vertical to Mount Agassiz’s summit. It’s a great long training day and doesn’t exclusively trash your running muscles.

Why is the Bishop High Sierra Ultra your favorite race?

Race weekend always has a family reunion feel that culminates with some quality post-race beer drinking and conversation. Watching the alpenglow sunrise on the towering Sierra Crest on the long, relentless climb up the rough and rocky, dirt road that defines this race always evokes a deep sense of awe. I think of the Sierra as my spiritual mountain range, and, every May, this race confirms that feeling.

Check out sagetosummit.com/sierra_runs.html for directions to these and other trails.

Deena Kastor of Mammoth Lakes holds the American record in the women’s marathon (2006 Flora London Marathon in 2:19:36) and twice represented the United States in the Olympic marathon. She won the bronze at the 2004 Athens games but dropped out of the 2008 Beijing race after suffering a broken bone in her foot nearing the 5K mark.

In a typical training week, I’ll run up to 140 miles (running twice a day) with ice baths after each, lift six days a week, get five massages a week, nap every day and meet with my coach to review my progress and training schedule. Whether I’m training for cross-country, track or road-racing season, there is nothing as refreshing hitting the trails to explore the Eastern Sierra—I call them rejuvenation runs. I forget about time and distance and set my sights on exploring new territory.

Last August I got a chance to run to Thousand Island Lake with some friends. The 18-mile route offers spectacular views of the Ansel Adams Wilderness Area. We started on the Pacific Crest Trail, running past fragrant wild lupine, phlox, columbine, Indian paint brush and yarrow and across streams. Just before reaching Thousand Island Lake at 10,000 feet, the Minaret and Ritter Range and Banner Peak come into view, reaching into the summer sky.

We looped back on the San Joaquin River Trail, passing Garnet, Ruby, Emerald and Shadow lakes, where we stopped to soak our feet before completing the last few miles. Nearing the end of our run, we picked up the pace, speeding around corners, hopping over rocks, bounding up steady hills and quickly chopping steps over tree roots. I need these spiritually rewarding adventures to get back in touch with the purest joys of running. It works every time.

Need a place to stay when you visit Mammoth? Deena and her husband, Andrew, rent out their three-bedroom town home and provide a “runner’s retreat” package for guests who like to run. Check out www.vrbo.com/185669 for details.

Climbing to the Top: An Adaptive Athlete’s Journey to Resilience on Mount Whitney