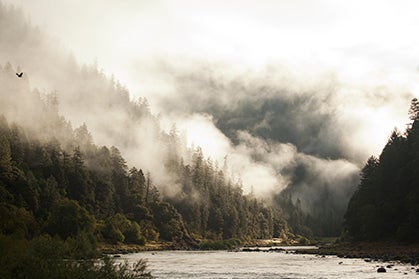 Runners may raft certain river sections to shorten the run distance or “just experience the river,” says trip organizer and OTT guide Erik Weiseth. OTT rows your non-running gear in waterproof bags down the river to meet you at the end of each day’s run, so all you have to do is enjoy the trail.

Says Weiseth, “No one else is offering this kind of experience on the Rogue.”

In mid-June, I joined nine other runners at OTT’s Rogue River Center in Merlin, Oregon, for the adventure. Ultrarunner and OTT running guide Vic Harris, who trains regularly on the trail, led the group, sharing information about the ecology and history of the region along the way.

“The Rogue is special,” says Harris. “It’s a major river with no road next to it. You’re out on the trail surrounded by wilderness.”

Originally, the trail was built as a thoroughfare for pack mules delivering supplies to gold miners in the Rogue’s deep canyon, and today remnants remain all along the trail. We ran by the Whisky Creek Cabin, which was built in the late 1800s by a miner hoping to strike it rich.

After about 10 miles in weather ranging from bright sun to mist and rain, a small trail sign pointed us down a steep, narrow, rocky trail toward the river where a cooler awaited, filled with ice-cold beer and soda.

After we dipped in the river, our guides shuttled us in rafts across the deep channel to the Black Bar Lodge, where we enjoyed private cabins and hot showers, played horseshoes, ate a full turkey dinner and had a late-evening dance party. Afterward, the Milky Way glinted in the night sky, providing just enough light to allow us to find our cabins.

Day Two
Black Bar to Marial (14.7 miles)
The second day started off with pancakes, eggs, hash browns, fresh fruit, bacon and plenty of coffee. About an hour later, we climbed out of the gorge and back onto the main trail, enjoying gentle rolling hills, smooth singletrack and expansive vistas. The group spread out between a blistering seven-minute-per-mile pace and a relaxed 14-minute-per-mile pace.

According to Weiseth, “Vic is mature and mellow enough that he is not intimidating, but athletic enough that he will keep up with just about anyone. And his enthusiasm is infectious.”

By the afternoon of the second day, we had completed about 24 trail miles. “The toughest terrain comes on the first day, which is also the shortest,” says Harris. “The second day starts with two big climbs, but then it’s mostly rolling trail through beautiful scenery that includes small waterfalls, creeks and river views.”

Sitting on the lodge’s upper deck at dusk, I joined our group in laughter as the OTT guides delved into story and joke telling, mostly at one another’s expense. As the canyon walls closed off the last of the day’s light, we headed inside and gathered on couches to watch a slideshow of the day’s adventures.

Day Three
Marial to Foster Bar (15.9 miles)
From the cliffs above Mule Creek Canyon on the morning of the third day, we caught glimpses of pools and gushing waterfalls, including the picturesque Staircase Falls, before watching the entire rushing river funnel into a 15-foot wide slot and Class IV rapid just above Blossom Bar.

“If you’re willing to stop here, you can watch professional river runners maneuver through the rocks and foaming whitewater,” says Harris.

Wildlife was abundant. Western blue jays, rattlesnakes, deer and black bears reminded us that we were in a wilderness area.

At the end of the trail, we met the OTT shuttle, which held cold drinks, food and dry clothes. After changing and eating we piled into the vans for the drive back to Merlin.
Tired and smelling of sweat and sunscreen, I closed my eyes and let the chatter of nine new friends lull me into an easy sleep.

Trips run from May to July. (www.orangetorpedo.com). This year, two Trail Runner Trophy Series Grand Prize winners will receive a free trip for 2013.