In the fall of 1889, the Seattle Press newspaper ran an ad asking for “hardy citizens who want to acquire fame by unveiling the mystery of the snow-capped Olympic range.” The call was answered by James Christie, who volunteered to organize an expedition if the Press would finance it. A few months later, with six men, four dogs, two mules, and 1,500 pounds of supplies, Christie set off into the wilderness.

In the summer of 2020, I had less trouble finding companions. After texting two friends the general idea, we made plans to run the same route, now a developed trail across Olympic National Park. Just like the Press expedition, we connected the Elwha and Quinault Rivers via the Low Divide, following one watershed up and another down. The big difference between us and the Press party? It took them six months to cross the Olympic Range; it took us less than twelve hours. If you’re looking to follow our footsteps, here’s a quick how-to. 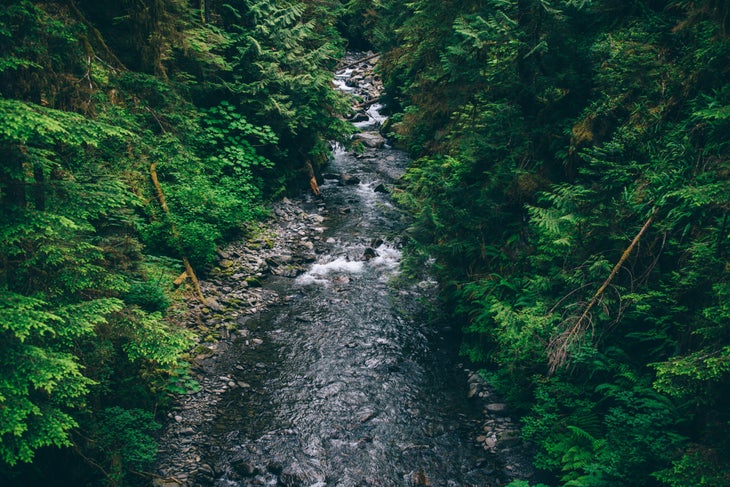 Gear: This route is fully self-supported. In fact, there isn’t a shorter trail in or out– so you’ll need to be prepared for anything. With this in mind, we brought a full first-aid kit, ankle brace, light jackets, emergency blankets and some extra food (around 3,000 calories each), just in case we got lost, got hurt, or moved slower than expected. Despite not needing any of these emergency and safety supplies, I would recommend them to anyone running the Low Divide. All of this was stuff inside a 12L Nathan running vest. We found that poles we’re quite helpful too, even if they occasionally get in the way in brushy sections.

Logistics: We opted to start on the south side of the park, at North Fork Trailhead. This running direction gave us most of the overgrown and technical running early in the day when our legs were fresh. It also allowed us to finish on the 30 mile downhill. The biggest downside was that we’d finish on 6 miles on pavement because part of the road from Madison Falls to Whiskey Bend was washed out a few years ago. After running the Low Divide I think we were right and would suggest, if possible, that you also run south to north.

Shuttle: The hardest part of the run is a three-hour car shuttle, driving a loop around the park on windy roads. Make sure you plan extra time for this! 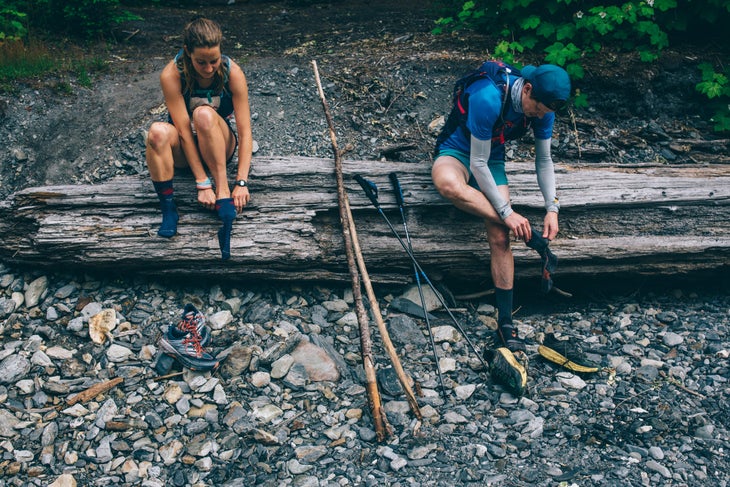 I recommend starting around sunrise, giving some flexibility to your day. The early miles are a slow but steady uphill and despite some sections with thick brush and mangled roots, mostly runnable at a slow, methodical pace. The trail climbs a gradual two thousand feet in the first ten miles and crosses a number of tributaries, which can be jumped dry feet unless it’s rained a lot in the last day or two. 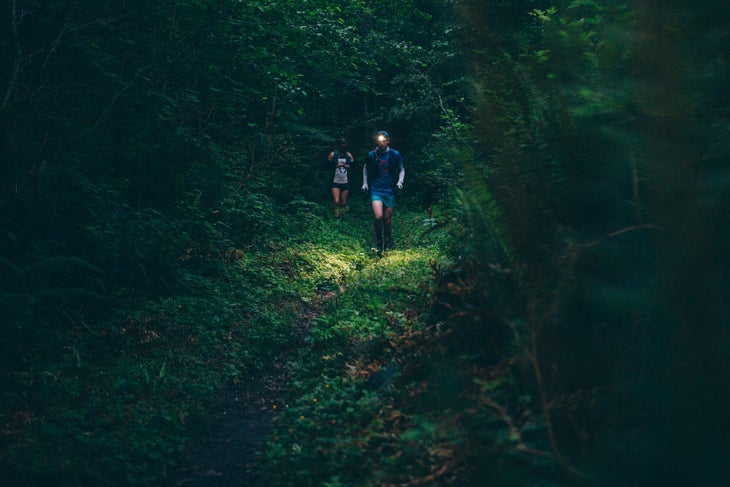 The climbing then picks up, with another two-thousands-plus foot ascent in just four miles. At mile twelve the trail crosses the Quinault River, a cold yet enjoyable break from the uphill slog. We had to take our shoes off to keep them dry and I’d be surprised if you didn’t have to do the same. 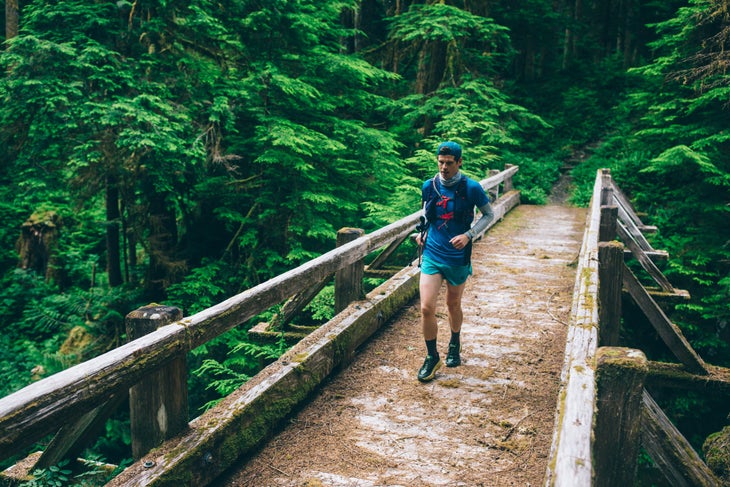 Weather can be quite fickle on the peninsula– we were fortunate to have a cool yet mostly dry day, but make sure you check beforehand because this could dictate much of your day. We reached Low Divide Pass in less than 4 hours– this is a stunning mile-long section with jagged peaks, clear lakes, and waterfalls surrounding the trail. 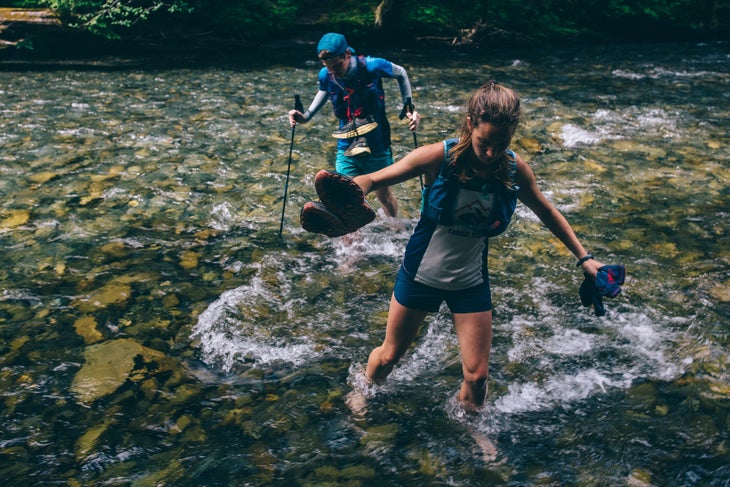 The descent off the pass is steep and was covered in thick brush and downed trees, making it slow going. After a few miles of bushwacking we found a better trail and returned to a faster pace. From mile twenty onward the trail is mostly smooth and flowy, with occasional muddy and overgrown patches. This part is fast and quite fun. 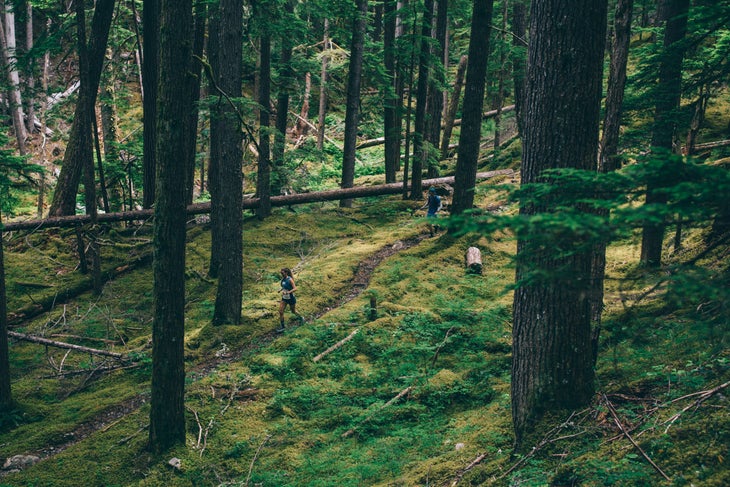 Once in the valley the trail parallels the Elwha river for a marathon’s distance, taking you through some stunning forests. The last few miles has some surprising climbs which make for a good finishing challenge. Overall the route was surprisingly runnable and could be even better if the trail is cleared of downed trees before you tackle it. Water is super easy to find– you could get by with handhelds but we enjoyed 1.5L bladders which cut down on stops. 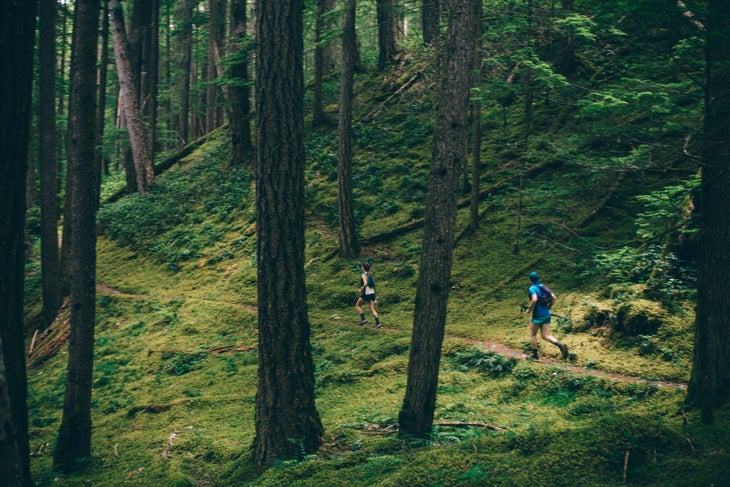 Whiskey Bend Trailhead, the original end of the route, is 44 miles in. Due to a washout in the road, the last six-and-a-half miles are on a road, all the way to Madison Falls Trailhead. The first hour of these miles are dirt and downhill, then flat along the river with one section of trail around the washout. 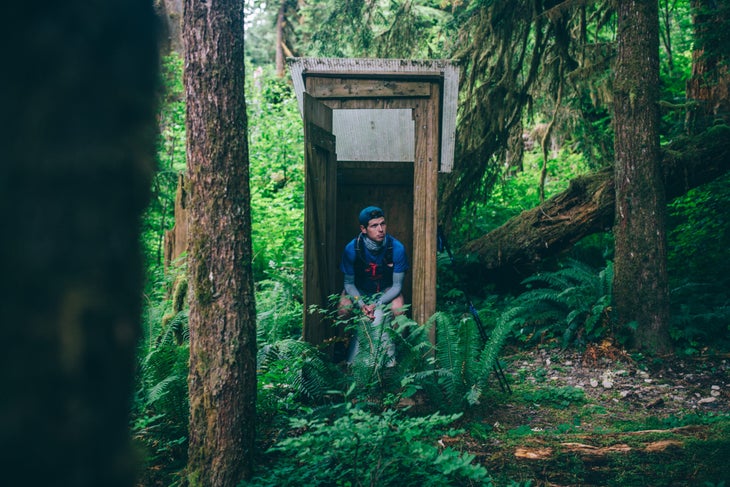