Spokane city-limits’ and outlying trails rival any other urban venue 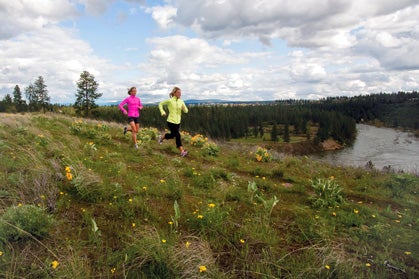 For eight months of the year, every Thursday, the Flying Irish running club meets in downtown Spokane for a three-mile run. Afterward, those who have earned their coveted Flying Irish shirt receive notable discounts on beer and burgers. In order to qualify for the shirt, a runner must run with the group six times, and, after his sixth, he or she must stand on the stage and tell an Irish-themed joke. Nine times out of 10, it’s a drinking joke.

The club swells in the summer when colleges are out, and new runners show up to test the waters, gauge the group’s running talent or get the inside scoop about local trails. At a recent Flying Irish event, one seasoned runner proclaimed to another, “What the hell! The roads in Spokane are so bad, I swear, it’s like every run is a trail run!”

While the roads in Spokane aren’t really that bad, trail running is a staple activity in the community. Located in a sweet spot between the Cascades and the Selkirk mountains, Spokane’s surrounding area hosts dozens of clean lakes and rivers. Tucked into the leeward side of the Cascades, on the edge of the arid Columbia River Basin, the area boasts a stable climate allowing for year-round trail running. Perhaps the best way to quantify the success of the Inland Northwest trail running is to count the number of ways one can connect with the local trail-running prospects.

Spokane stretches east-west along Interstate 90 and the Spokane River. It’s so close to Washington’s eastern border that the “k a n e” in Spokane often rests in Idaho when you find it on a map.

The trail-running opportunities in town easily compete with some of the bigger destinations just outside of the city limits. Several trail systems rise right from the center of town. From Beacon Hill to Dishman Hills to the bluff below High Drive, nearly every neighborhood hosts a natural area with volunteer-maintained trails. The breadth of these urban trail-running locations feed directly into the prominence of the Spokane high-school boys’ cross-country dominance. Whereas some high schools might have a dynasty, virtually every Greater Spokane League (GSL) school has produced nationally recognized runners and championship-caliber teams (see sidebar).

Like in many places, a good portion of the credit in trail development belongs to the mountain-bike tribe, and Spokane trail runners know this. While many trails initially sprout from game paths, then some foot traffic, it’s often the mile-munching mountain bikers that do a majority of the work here. The bluff below High Drive showcases their efforts, and multiple trails criss-cross the steep west and south sides of Spokane’s South Hill. Bordered by the Qualchan golf course, Hangman Creek and a pair of railroad tracks, these trails deliver some calf-burning tests while overlooking the Latah Valley.

To the west of town, yet still within city limits, Riverside State Park warrants recognition as perhaps the most user-friendly, non-motorized section of metro-backcountry in all of Washington. Between the Spokane River and the massive basalt cliffs lining Meenach Bridge to Seven-Mile Bridge, the Park provides Spokane with a special trail-running sanctuary. Riverside is the second largest Washington State Park and features enough trails to host a respectable 50-kilometer trail race every April, as well as the occasional running camp. Essentially every nearby high school and college, plus all of the area running teams, make a point of training at Riverside. Three roads, one footbridge and one paved bike path grant the only access to the primary southern portion of the Park.

Andy and Heather LeFriec might be the quirkiest running couple in town. Even though they’re happily married, they banter like Felix and Oscar on Facebook about their running, or their grueling workouts, or their teammate’s accomplishments. Heather helped initiate a successful women’s running team, the Spokane Swifts, and they regularly meet at the Military Cemetery parking lot inside Riverside for lengthy endurance runs. Andy co-founded a men’s running team, the Spokane Distance Project, and many of its members traverse the Park every month of the year.

Says Heather, “You can run for as long as you want, for as many miles as you want, without running the same trail twice. You’ll pass big basalt boulders, old concrete walls made for military training and lots of whitetail deer. The terrain is diverse and the trails are user-friendly—they are marked, and it’s impossible to get lost as long as you keep the river in sight. You don’t have to be an experienced trail runner to enjoy it.”

Adds Andy, “For me, it is the river. There is something wild and uncontrollable about a river that connects with my soul, and often stops me dead in my tracks. … I have no choice but to lift my hands in a prayer of thanks.” 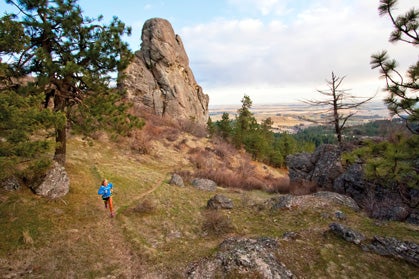 Heather LeFriec sampling one of the best trails in the Dishman Hills Natural Area, near Big Rock, just south of Tower Mountain. Photo by Jon Jonckers.

Seasons. Thanks to the rainshadow effect from the Cascade Mountains, the weather in Spokane maintains an even keel. The winters aren’t too cold, roughly mid-30s, and the summers aren’t too hot, averaging mid-80s.

Resources. While Spokane has its share of big-box sports stores, there’s really only one running specialty store. The Runners Soul (www.runnerssoulspokane.com) has two locations, a knowledgeable staff and the best selection of running gear. Runner-up alternatives include REI, Fitness Fanatics and Mountain Gear.

Refuel. O’Doherty’s Irish Grille looks like many downtown pubs, but the charm and character inside is unmatched. Order a Hooligan Hannigan with a Black Death (Guinness poured over Rogue Dead Guy Ale) and guestimate the dollar bills’ total on the walls around you. The Flying Goat belongs in its own category—it’s one of the best watering holes in town, the gourmet pizzas are superb and it’s located practically right across the street from Riverside State Park.

Races. Without a doubt, the Spokane River Run 5K, 10K, 25K and 50K in April is the most popular trail race in the community. It’s completely managed and operated by volunteers, and 100 percent of the funds go toward youth education and wellness programs.

For those that want to bite off a little bit more, consider the Rainshadow Running Mount Spokane 25K/50K trail race in October. (www.rainshadow-running.blogspot.com)

Camping. The Bowl & Pitcher campground inside Riverside State Park is a good choice with all the standard campground amenities. (www.parks.wa.gov/parks/?selectedpark=Riverside)

Equally beautiful and wild, yet more tranquil than Riverside, the Turnbull National Wildlife Refuge encompasses approximately 16,000 acres of marshes and channeled scablands about 20 miles southwest of Spokane. The combination of basalt outcrops, canyons and undulating meadows provide a year-round diverse landscape. Because Turnbull is a true wildlife sanctuary, roughly 13,000 acres are quarantined solely for wildlife preservation. The mosaic of wetlands provides important habitat for migrating and breeding waterfowl—more than 200 different kinds of birds have been recorded in the Refuge. While most of the park is preserved for the animals, the 3000 accessible acres are a local treasure.

All of the trails within Turnbull stem from the 5.5-mile scenic dirt-road loop. Most runners park at the visitor center and simply run the road to access the trails that encircle spectacular lakes, or loop around to boardwalks that weave through marshlands or rolling grasslands. Normally, the park requires an entrance fee, but in the winter months, outside of the major wildlife migrations, the Turnbull Refuge is completely free and still beautiful.

To truly thrash your legs and your lungs, try running up Mount Spokane. The main mountain looks like an upside-down salad bowl, and the satellite peaks, such as Kit Carson and Quartz Mountain, offer rugged, technical trails. Though it doesn’t reach the same heights as the nearby Selkirks, at 5889 feet, Mount Spokane is the tallest peak in the area. Mount Spokane State Park is the largest of all of Washington’s State Parks; however it doesn’t draw the largest crowds. A downhill ski resort covers a major swath of the mountain, yet just a sliver of the Park.

Local trail runner Jeanne Armstrong says, “Stepping off the pavement and onto the trails of Mount Spokane is more than a change of surface—it changes my mood. It’s a great workout, often a big challenge and so rewarding.”

Many trail runners stick to the portion of the park that contains the Nordic ski trails as they’re well marked, and offer plenty of parking as well as a few pit toilets along the way. Thankfully, the greater Nordic area hasn’t been logged in decades, so there’s plenty of shade, very little dust and a lot of greenery. The trails looping around Quartz Mountain and Shadow Mountain afford great views of eastern Washington and into northern Idaho.

From the urban trails to the State Parks to the National Wildlife Refuge, Spokane’s trail-running locations provide an unmistakable draw. Clearly, the climate, the terrain and the community bolster a rich running heritage.

Just make sure you have your Irish joke fully rehearsed before you step onto the stage for your Flying Irish shirt because, like the local trails, some of the trail runners can get a little bit wild.