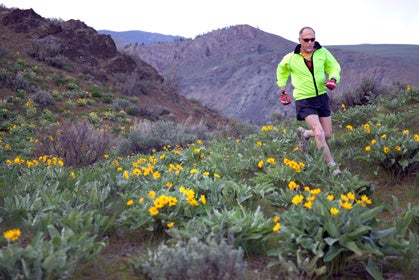 Dr. Joseph Jensen, a family practice physician in Twisp, gets his daily workout near the finish of the annual Sunflower Iron and Relay. Photo by Macleod Pappidas.

There I was, struggling at the bottom of a long hill at mile 13 of the Sunflower run, expecting at any moment for my well-worn I-hate-hills monologue to kick in. But oddly, I found myself … feeling happy, grinning like that goofy guy on the cover of Mad Magazine. With a quick 180, I scanned my surroundings and it hit me: why wouldn’t I smile?

There I was in early May in the Northwest—generally a time when the phrases “rain changing to showers” or “showers changing to rain” show up eight times in every 10-day forecast—trail running under cloudless skies of blue. Temps in the 60s. Traipsing, I was, with a couple hundred other like-minded folks. Up and down meadows of golden sunflowers and purple lupine, bounding across sagebrush ridges high above horse and cattle ranches that look like something out of the movie Lonesome Dove. Through it all, my lungs take in whole-gallon gulps of that wonderful dry, ponderosa-pine-flavored air. Even though this hill was giving me problems, I was feeling mellow. Methow Valley mellow.

About 200 miles northeast of Seattle, just over the eastern slopes of the Cascade Mountains, sits the 1700-square-mile Methow Valley (pronounced Met-how), named for one of the plateau Indian tribes of North Central Washington. In contrast to the west side (and therefore, wet side) of Washington, the Methow means one thing: sun. Winthrop, the Methow Valley’s most well-known town (pop. 360), boasts 300 days of sunshine per year to Seattle’s 55, while, rain-wise, Winthrop is misted with 11 inches to Seattle’s 38.

For the past few decades, Methow has become renowned for its 120 miles of popular Nordic ski trails (the second largest in the country), and when the knobby-tire set discovered they were also great for biking, the Methow Valley Sport Trails Association (MVSTA) initiated a mountain-bike race series, quickly garnering the area a rep as a fat-tire mecca. Then, 10 years ago, runners of the dirt got their own MVSTA Trail Run Series.

“Just as living in the Methow Valley is more than just living in a beautiful place, the series is far more than just a trail-running series,” says Andrew Nelson, a Methow local and series veteran. “Both are really an amazing and unique transformation of a state of mind.”

It is a state of mind that, like the valley’s Old West vibe, manifests itself in a spirit of rugged individualism. Runners gather to race, and newcomers are always welcome, but there’s no established running club. Maybe an e-mail goes out to a loose collection of runners, mountain bikers, cross-country skiers, horsepackers and the like that the sunflowers (arrowleaf balsamroot) are in full show and that tonight at 5:30 after work is the time to run Buck or Patterson mountains.

The five-race MVSTA Trail Run Series kicks off with the Rattler Half Marathon, so named because the race, which entails 1800 feet of climbing, takes place in Pipestone Canyon, an area renowned for its rattlesnakes. Thankfully, the race is in early April, when the rattlesnakes haven’t yet risen from their winter slumber.

Then in early May there’s the previously mentioned 21.5-mile Sunflower Iron and Relay, which started some 30 years ago as a four- to six-person relay. Soon enough, though, more and more people wanted to run the whole thing (thus the Iron event) to the point that now the field for the point-to-point, ridge-rolling, Mazama-to-Twisp trail race is made up of about 20 teams and 150 Iron competitors. Such is the Sunflower’s appeal—beautiful early spring weather, a significant and hilly but not overly long or arduous distance—that trail runners from throughout the Northwest flock to it. The results list for 2008 race listed runners from Portland, Vancouver, Seattle, even Anchorage and Seward, Alaska.

A couple of shorter events, the Mazama 10K and the Run the Sun 5- and 10-Milers, follow later in May and July when temps in the valley can hit 90 degrees and above. The series culminates in late August with its crown jewel, the 11-mile Cutthroat Classic. From 4800-foot aptly named Rainy Pass in the rugged North Cascades, the first half of the point-to-point course follows the Pacific Crest Trail (PCT), ascending a dividing line that separates western and eastern Washington. To the west are those jagged, snow- and glacier-clad peaks, dense dark forests and countless waterfalls that are the Cascades’ namesake.

Approaching the race’s midpoint at 6800-foot Cutthroat Pass, all that changes. From here to the finish, it’s all rust-colored ridges and dry, rocky spires extending as far as the eye can see. Stands of western larch are still green on race day, but give them six weeks and the forests here, and all over the eastern slopes of the Cascades, turn into a blaze of golden glory. Ponderosa pines predominate farther down and on the screaming descent to Cutthroat Lake and the finish line beyond, runners find themselves inadvertently kicking off pinecone avalanches. Space is limited in the Cutthroat and its 225 spots usually fill up months ahead of race day.
Public Treasures

But not all things trail-running related in the Methow have to do with racing. Along with the 100-plus miles of trails in the valley itself, the Methow is situated within minutes of two wilderness areas, the Pasayten and Lake Chelan-Sawtooth; two national forests, Okanogan and Mount Baker-Snoqualmie; and one the most rugged, undeveloped national parks in the country, North Cascades. Much of these areas are alpine, 5000 feet and higher, and crisscrossed by miles and miles of trails.

“The Methow Valley is just this little sliver of private land, and then everything else around it is public forest or wilderness,” says avid trail runner Dan Kuperberg. “There’s three million acres of public land extending all the way up to the Canadian border.”

From Hart’s Pass, at 7000 feet the state’s highest public road, runners can head south for a 30-mile roller coaster traverse along the PCT back to Rainy Pass. Or head out the Wolf Creek Trail for an out and back to the foot of Gardner Mountain. Or up to Tiffany Mountain or the inaptly named Easy Pass.

“As the snow melts out, we work our way higher and higher in the mountains,” says Allison DeLong of Mazama, Washington. Those with some ambition climb up and over Sawtooth Ridge via the War Creek Trail and drop down thousands of feet into the deep narrow gorge of the 50-mile-long Lake Chelan. At 1400-plus feet, it’s the country’s third-deepest lake. Runners with a credit card can spend the night in a cabin in remote Stehekin or, if they’ve arranged for a pickup, take the Lady of Lake, a passenger ferry that drops them off in Chelan, about 60 miles south of Winthrop.

“The trail-running possibilities over here are pretty much limitless,” says Kuperberg. “There are way more trails than there is time to run them.”
TRAILHEAD // Methow Valley, WA

Winthrop and the Methow Valley are located on Highway 20 (North Cascades Highway) in north-central Washington, about four hours’ drive from both Seattle and Spokane. Due to snow, Highway 20 closes from November to April, requiring visitors from Western Washington to drive east and north on Highways 2 and 97, adding about an hour to the drive.

Most of the Methow Valley is at 1800 feet (and more) and from late fall to early spring may be snow covered. July and August can be hot, with temperatures in the 90s, occasionally hitting triple digits. Trail running in the mountains (North Cascades National Park, Pasayten Wilderness, etc.) is best from July to October. Consider a mid-October run when the Western larch have turned gold and the mountains have received their first snow dusting.

In addition, about 40 miles’ worth of public trails leave from the posh Sun Mountain Lodge (www.sunmountainlodge.com), which has an activity room featuring trail maps, books and other information.

Head a couple miles north of Winthrop to Pearrygin Lake State Park (www.parks.wa.gov), which offers tent and RV camping as well as swimming, fishing and boating (showers and flush toilets too). Numerous primitive campgrounds are located throughout the Methow Valley. For information, go to the Okanogan and Wenatchee National Forest website (www.fs.fed.us/r6/oka).

Bring the mountain bike for recovery days or fishing rod for some quality time in the Methow and Twisp rivers. Music lovers should visit in July during the three-day Winthrop Rhythm and Blues Festival (www.winthropbluesfestival.com), and art lovers can check out the Winthrop Gallery (www.winthropgallery.com, 237 Riverside Avenue, Winthrop; 509-996-3925) for everything from furniture to fine paintings to jewelry to pottery from some of the top artists in Eastern Washington.

This article appeared in our June 2009 issue.

Mike McQuaide is a Bellingham-based trail runner from the wet (west) side of Washington, and the author of five books including Trail Running Guide to Western Washington (Sasquatch Books).

When “Running Towns” Go Up in Smoke