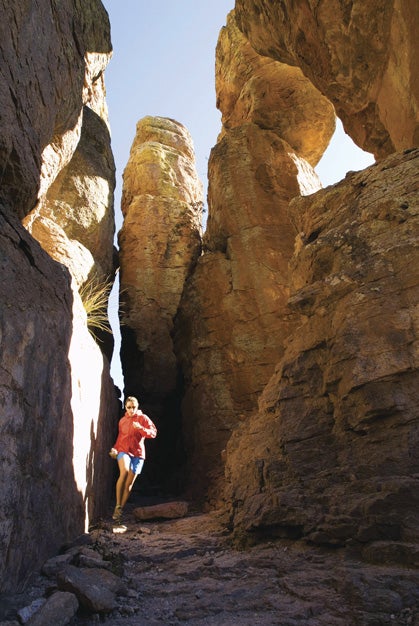 Gearing up in a brisk wind at the Echo Canyon Trailhead (6780 feet) in the Chiricahua Mountains, we armored up beneath hats, gloves and wind-proof layers, then descended into a tight canyon, out of the gale. It was January in Arizona’s high desert. Rays of sunlight streamed up the trail and we soaked up their warmth. The canyon became saturated with the scent of pines. Spires reared their bulbous heads high above the forest, catching the morning light.

Racing down the trail to generate metabolic warmth, my partner, Agnes, and I took turns with smart-ass comments about running in cold-weather gear on our winter escape from Alaska to the Southwest. The early light selectively touched spires and I stopped to pull out the camera. Agnes paused for a couple shots before continuing down the trail. “No more stopping until we’re in the sun,” she scolded.

As we neared Ed Riggs Trail’s end, the ponderosas gave way to spindly rocks. Rounding a bend, we veered onto the Hailstone Trail, which tread a rock shelf high above the canyon. The drop to our left measured a few hundred feet while an army of volcanic-tuff towers hemmed us on the right. The south-facing wall caught the brunt of the rising sun, allowing us to strip to shorts and T-shirts.

Having spent two weeks working in Southeast Arizona, on the advice of locals, we had road tripped to the Chiricahua Mountains. The Chiri-what? Try CHEERY-COW-AH, greenhorn. “The trails are unreal—spires, slots, tunnels. You guys have to check it out,” urged one Bisbee local during a festive night on the town. “It’s like a forest of rock towers, totally crazy.”

It’s amazing what a little rain and wind can do if left unchecked for millions of years. Our path cut behind giant blades of rock a hundred feet tall and only a foot wide. Pillars twice as high stand with giant overgrown cap rocks. Their toothpick-and-olive stature thumbs its nose at the laws of gravity.

“Hey, Ags, give me a hand with this one,” I joked while pretending to push over a slender spire capped with a boulder. “I wouldn’t even lean against it,” she said as she cruised by.

We try to keep a pace and not trip into the canyon while rock gawking. The final leg of our loop dives deep into a maze of spires and grottos. We duck into tunnels and squeeze through slots, giggling like a couple of six-year-olds at Disneyland.

I give up on any attempt to make sense of this jungle gym. Apparently, the place even has geologists scratching their heads. They believe that a violent eruption some 27 million years ago from the nearby Turkey Creek caldera laid down a vast wasteland of white-hot ash. This welded into a 2000-foot-thick rhyolite layer that was later uplifted and eroded into the Chiricahua Mountains. But I can’t help feeling like this is a place where the forces of nature just decided to show off a little bit.

A final mile of tunnels, slots and mushroom-carved boulders drop us back in the parking lot, ending the most spectacular five kilometers I’ve ever run. And that was just our warm-up.

A longer loop took us into the Heart of Rocks, home to obviously named attractions such as Duck On a Rock and Pinnacle Balanced Rock. The latter stands as the ultimate offense to gravity—a house-sized block standing upright on a tiny pedestal.

From a high vantage point, thousands of balanced rocks populate the mountains and valleys. The surrounding country is surprisingly largely undeveloped, open for overnight excursions. But don’t dally. One good earthquake and the whole park would tumble to the ground. Until then, the magical art of erosion will continue, cutting away at the weak points one chunk of rock at a time.

This article appeared in our February 2009 issue.

The traveling photo duo of Matt Hage and Agnes Stowe eavesdrop on locals to find hidden trail-running gems, and split their time between Anchorage, Alaska, and Oregon’s Willamette Valley.