Fires in Waldo Canyon, Colorado—and elsewhere—have affected the training and racing plans of trail runners throughout the American West. But the damage they have caused runs deeper. 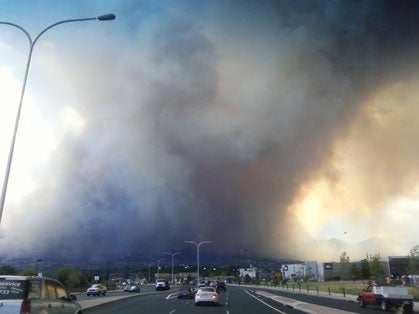 On Monday, June 25, John O’Neill was confident that the Barr Trail Mountain Race was set to run as scheduled.

“We had a committee meeting that Monday and it was still on,” he says of the race, which he directs and which was supposed to be one stop in the 2012 La Sportiva Mountain Running Cup.

He had reason to be concerned about the 12.5-mile course. Starting near Manitou Springs, Colorado, and climbing a significant section of Pikes Peak to Barr Camp before descending back, the race was near the path of one of Colorado’s most destructive wildfires ever—the Waldo Canyon Fire. But it appeared the fire would miss the course. “[El Paso County] Search and Rescue’s concern was that there is no access to the trail except for two seldom-used fire roads, in case they needed to evacuate,” says O’Neill.

Then things took a turn.

“On Tuesday, when I went to finalize permits with the fire service, they were standing outside and said, ‘You should see this,’” he says. “The fire had gone three miles in one hour and destroyed a bunch of homes.”

Faced with the agonizing option of cancelling the race, O’Neill made up his mind: safety first.

The Waldo Canyon fire started on June 23rd. Before being contained, it claimed 18,247 acres of forest, 346 homes (and damaged an additional 50) and two lives. 32,000 people were evacuated from Colorado Springs and the surrounding area as images of a tower of fire and smoke cascading down the mountains and toward the city went viral online.

“The fire ranks as the most destructive fire in Colorado’s history,” says Bob Street of the El Paso County Search and Rescue (EPCSR).

Street says dry conditions and high winds were to blame for the fire’s quick spread. EPCSR Chief Larry Dunn noted that winds from a nearby thunderstorm prompted the firestorm that convinced O’Neill the race had to be canceled on Tuesday, June 26.

“Tuesday evening I was at the Blodgett Trailhead, a location popular with hikers and runners and location of many of our missions,” Dunn says. “There was fire on the ridges and slopes, torching, some homes still burning, and thick, thick smoke … a very surreal sight indeed, with a few homes still lighted, but mostly just our headlights and red and blue warning lights and the fire reflecting off the smoke.”

Friends of The [Pikes] Peak had a trail crew working on the south slope of the mountains when the fire erupted on the 23rd, according to the organization’s president, Michael Cotter. “We were not in any danger, but to see the smoke plume rise above Almagre Mountain was a sobering experience,” he says. “Based on the size of the plume and how quickly it rose you could tell it was a huge, fast-burning fire.”

Eventually, nearly all trails on the western edge of Colorado Springs were closed, including Barr.

“Obviously, the fires hit really close to home,” says Pikes Peak Road Runners President, Michael Shafai. “Our club and other running groups in the area conduct training and social runs on affected trails. One of our more popular club races, the Pony Express, is held in the Rampart Reservoir area, and judging by aerial views of that area, we may need to relocate that race, which is held in the fall.”

Shafai also says he is concerned about the diminished aesthetic value of the surrounding mountains.

“While most of the forest is still intact, it’s difficult to ignore the charred trees and brush in the foreground,” he says. “As trail runners who appreciate the glory of the mountains, we are sad to see such devastation.”

Waldo Canyon was not the only spot in the American West affected by wildfires this summer. The High Park Fire claimed numerous homes and acres of forest near Fort Collins, Colorado, and fires spread throughout the state and into neighboring Utah.

“Safety always has to come first. It is sometimes possible to modify a course to avoid a fire or an unsafe previously burned area, but there is no way to change a course to avoid dangerous air,” says Bruce Copeland, Director of the Logan Peak Trail Run in Logan, Utah. Logan Peak was run without incident on June 30, but Copeland says fires were visible from portions of the course the next day. “One fire was about two to three miles from the regular Logan Peak Trail Run course and about half a mile from one of our alternate snow and fire course routes. Fires not only affect our trails and the views from those trails—the smoke from the fires makes it dangerous to run and train.”

Still, Shafai says such inconveniences as canceled races or limited training options are minor inconveniences in the scheme of things. At the Summer Round-Up Trail Run in Colorado Springs July 8, he saw a friend and learned he had lost his home in the fire.

“But he still showed up to the race, only days after losing pretty much everything he owns,” Shafai says. “This gives me hope that such resilience will transfer into the broader community and we will soon see trail reconstruction and reforestation efforts designed to not just repair the damage, but perhaps make it better than it was before.”

“But in the meantime, it is sad to see such loss within our community and among our friends,” he says.