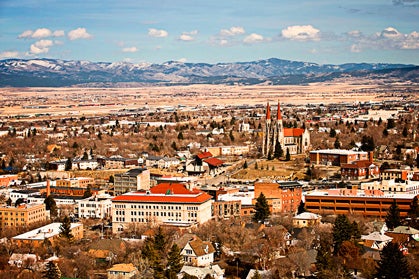 The view over downtown Helena. Photo by Ben Pierce.

Go if … your idea of heaven is easy access to over 70 miles of singletrack with awesome ridgeline views, a vibrant arts scene and an active trail-running community that continuously acquires land on which to expand its premier trail system. Helena’s friendly runners will gladly direct you—or probably even join you—for a run or glass of the best single-malt IPA around.

This former gold-mining town (pop. 30,000) turned state capital sits almost halfway between Bozeman and Missoula in west-central Montana. Helena’s well-preserved classic western charm and numerous 1880s-era buildings add to its appeal, and finding your way to a run is simple—an array of trails begins near the town center and lead to thousands of square miles of public lands. “We’ve worked hard to maintain access to public trails within the city,” says local runner Michele Bazzanella.

Best Trails Mount Helena City Park spans 620 acres, rises 1300 feet above town and is home to six challenging trails totaling 20 miles. For a four-mile jaunt, take the Prairie Trail from the Adams Street parking area to the Backside Trail, then hop onto the Hogback Trail, which winds up to Mount Helena’s 5468-foot summit, the only spot from which you can overlook Helena. Descend via the historic 1906 Trail, named for the year it was built.

The 20-mile South Hills Trail System meanders to the 5291-foot summit of Mount Ascension, a mile from the city. For a two-mile link-up to the summit, take Deford Trail to Eagle Scout Trail, then Pail Rider Trail and up to the base of the new 2006 Trail, where, on Wednesday evenings, you’ll be within earshot of blues, jazz and acoustic folk music during the Alive at Five in the Park live-concert series.

For a unique point-to-point run, take a trolley (which operates on Saturdays in summer) to the Helena Ridge Trail. It begins with a tough one-mile climb followed by seven miles of downhill along a forested ridge leading to Helena City Park. Add additional miles by exploring any number of side-trail loops that spit you out at the Blackfoot River Brewing Company’s front door.

Race May’s Don’t Fence Me In Trail Race (pricklypearlt.org), includes a 30K, 12K and 5K. The longer events’ switchbacking courses make you feel as though you’re trapped on the endless stairways of an M.C. Escher drawing.

Hosted by Helena Ultra Runner’s League (HURL), August’s HURL Elkhorn 50-mile/50K Ultramarathons (helenarunningclub.com) follows singletrack trails in the Elkhorn Mountains, with the 50-miler including nearly 12,000 feet of elevation gain and the 50K almost 7000 feet. Steep technical climbs in the last quarter mile of both races force you to watch your step. Also beware getting lost, as large herds of elk have disrupted course flagging before!

The South Hills Trail Series (S.H.A.T.S) (helenarunningclub.com) is a series of four trail races ranging from a 3.2-mile night run (B.Y.O. headlamp) to a 7.3-miler on the easy Little Blackfoot Trail.

> Go when Nestled against the Rocky Mountains, Helena receives only a dozen inches of rain annually, most of which falls between May and July. Spring snow covers most trails until late April or early May.

> Resources The Helena Running Club (helenarunningclub.com) meets almost daily for trail runs or track workouts. Visit pricklypearlt.org for information and maps about trails managed by the Prickly Pear Land Trust. And the Helena Chamber and Visitors Bureau (helenacvb.visitmt.com) and downtownhelena.com have calendars of arts and culture events, shopping and dining guides.