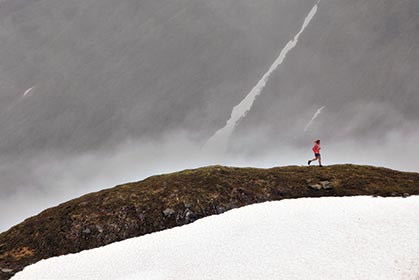 “That’s Rainy. She’s 13 years old,” said my Anchorage host, Matias Saari, chuckling, as I got a welcome lick on the cheek from the old husky. I tossed my shoes onto a pile of mountain gear and draped my coat on top of several others. Trail shoes, mountain boots and base layers in varied states of decay littered the entryway.

A person’s gear can tell a lot about him. One glance at Matias, his lean but sturdy frame and calloused hands, and I could tell—Alaska’s Chugach Mountains are hard on equipment, but toughen the body and strengthen the soul.

Christie Haupert, Matias’s partner, filled the room with endorphin-fueled energy. She had just returned from a three-hour ridge run in the front range of the Chugach Mountains—starting and finishing from their door.

“Did you guys see the fresh bear kill down the road?” she asked. “Apparently a brown bear got a moose.” The news somehow segued into Matias telling several of his favorite bear stories, most of them ending with a startled bear and spooked runner moving cautiously in opposite directions.

After a strong cup of coffee, Matias and I geared up for a late-afternoon jaunt up Bear Ridge from his house in Bear Valley. Rainy saw the pepper spray and leash come out, forgot about her arthritis and danced around the doorway. Out the door we went. Five-acre lots and rustic houses quickly gave way to open space in a half-mile-wide basin. Just 10 minutes from the house, we were pushing through head-high tundra shrubs and up toward a treeless ridge. From there, looking west, we gazed out on the wide Turnagain Arm and tidal flats dwarfing Anchorage into a quaint little port town. Snow-filled shady couloirs made for a good glissade into the belly between two peaks. I felt like a little kid who’d stumbled onto the big boy’s playground. 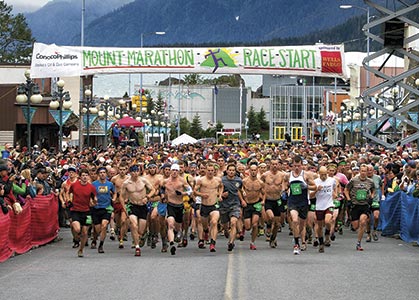 In reality, bears, lions and moose are not limiting factors for trail runners based out of Anchorage—you are 12 times more likely to die of a bee sting than a bear attack. But with Chugach State Park—the third largest state park in America, spanning over 495,000 acres, starting at the town’s edge—locals will be the first to remind you that, although Anchorage feels urban, the city resides in the middle of a vast wilderness. Being bear aware and seeking out local knowledge is part of experiencing the glacier-fed rivers, unrivaled mountain vistas and high alpine wildflowers.

Geoff Roes, an accomplished ultrarunner who lives and trains part of each year in the state capitol of Juneau, had put me in touch with Matias for all things mountain in the Anchorage area. I set out to experience Alaska at a pace slow enough to appreciate the small stuff, riding my bicycle from Woodinville to Bellingham, Washington, hopping a ferry to Homer, Alaska (www.dot.state.ak.us) and camping on the deck with other free spirits, then cycling north through the lightly populated Kenai Peninsula to Anchorage. (Flying to Ted Stevens Anchorage International Airport is also an option.)

“Your schedule couldn’t be better—you’re just in time to watch Mount Marathon,” Matias said in our first conversation. I had not heard of the event, but Googled national coverage of the 2012 race—where two people ended up in the hospital and one vanished, and still has not been found!

Clear back in 1915, Mount Marathon began at the Yukon Bar in Seward, when two sourdoughs argued about the odds of climbing and descending the local peak in less than an hour. “Impossible,” one exclaimed. To settle the argument, a race was formed; the loser would supply drinks for the crowd. Now the race happens every 4th of July, and attracts a full lottery-selected field of 350 men, 350 women and 250 juniors. The 3.1-mile route to the summit is a beast, with 3,022 feet of vertical gain over rough terrain, where racers pick their own way up—and back down—an average 38-degree slope. Finishing Mount Marathon is a rite of passage.

Matias has more than a handful of podium finishes on the local racing circuit, including a win, and fourth overall at the 2013 Mount Marathon. Palling around with him post race felt like riding shotgun in a chariot—only it was a Subaru packed with smelly runners, a case of PBR and renowned mountain runner Rickey Gates sitting in the open trunk. Adding to the excitement and festivities was the fact that Gates, along with local athlete Eric Strabel, had just broken the course record that had stood for over 20 years (see “(Not) A Runner’s Story,” April 2014, Issue 95).

Whether you are a competitor or not, the mountain-running scene around Anchorage is welcoming, more about getting out often and having a good time and less about results or ego. Around 2 a.m. over the sound of bongo drums and acoustic guitar, I shouted to my friend and adventure photographer Eddie Gianelloni: “This is the best race I’ve ever been to, and I didn’t even run it!” 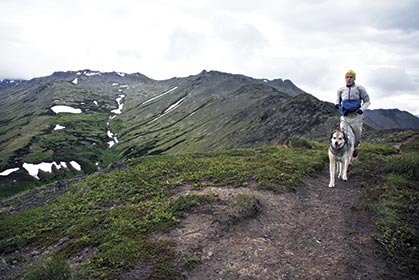 Anchorage local Matias Saari and his trusty husky, Rainy, run a ridge above Bear Valley in the Chugach Mountains. Photo by Eddie Gianelloni.

Holding your right hand out in front of you, palm facing away, Anchorage is the junction between thumb and wrist. Located in south-central Alaska, north of the Alaska Peninsula and Prince William Sound, and a two-hour drive south of Denali National Park, the city sits in coastal lowlands and extends south and east to the lower alpine slopes and front range of the Chugach Mountains. With a half-million acres and easy access, a person could spend a lifetime ridge running, chasing summits and following streams to the ocean.

Branching south from the city is the Turnagain Arm, a fjord with steep walls and shallow bays and immediate trail access from the Seward Highway, which snakes along the water’s edge. To the north the Knik Arm, another fjord, juts inland with the town of Eagle River along the coast and serves as a jumping-off point for northern access to the belly of the Chugach. Farther north is Denali National Park and to the south is Seward, both within a two- to three-hour drive of Anchorage and offering access to more remote trails.

“The possibilities are endless,” says Ben Summit, a long-time local endurance athlete with finishes in events such as Little Su 50K and Crow Pass Crossing to his credit. Summit’s recommended quick hits are the Rabbit Lake or Turnagain Arm trails, both within minutes of downtown and 12 and 16 miles respectively. Both offer flowing singletrack with fun technical root sections in the middle and great views the entire way.

For a long outing, Crow Pass, about 25 miles one way, is a Chugach State Park classic. Following an Iditarod supply route, passing through mining ruins and a rocky gorge with waterfalls and climbing up and over a mountain pass to the shores of Crystal Lake with big views of Raven Glacier, Crow Pass has all the ingredients for an epic run. The biggest obstacle is crossing Eagle River on the backside of the pass. Be advised glacial rivers swell under hot sun or heavy rains—time your crossing accordingly and do so between the marked ford sites (white posts).

For a long run in Denali National Park and a glimpse of North America’s highest peak, Mount McKinley (20,322 feet), Summit recommends Kesugi Ridge Trail, a 36-mile route with four different access points. It can also be run as an out-and-back. The trail covers varied terrain, including beautiful sections of open tundra.

At first glance Anchorage looks and feels like little more than a rugged depot, a stop-over on the way to farther-flung places. Open the door to one of the restaurants and everything changes. Foodies rejoice—Anchorage knows how to eat (not surprisingly, seafood is a mainstay at almost every restaurant). At the Alder Wood-Grilled Alaskan Sea-food Skewer, try the salmon, halibut and rockfish marinated in herb oil, with garlic mashed potatoes, broccoli and portabella-tomato tapenade, paired with 2011 Ukrainian Eisbock brewed on site at Glacier Brewhouse. At the more affordable and sometimes rowdy local hangout, Humpy’s, sample their Alaskan King Crab Nuggets and any of over 20 local brews.

If your legs need rest but you’re still feeling wild, check out the Alaska Wildlife Conservation Center, where you can drive through the natural, but fenced in, habitats of an elk, wood bison, musk ox and brown bear (animals on site were either orphaned or injured and with your support may be released back into the wild). For artists, the Alaska Center for the Performing Arts is your venue; with upcoming acts Anchorage Ballet’s Arts Night and Bal-aska, a person can view local Alaskan culture and talent all under one roof.

From the bugs to the rivers to the ridges, trail running around Anchorage will undoubtedly spark appreciation for experiencing new terrain at your own pace. Whether it’s two hours or 10, running in the Chugach or near the base of Mount McKinley, there’s something for every trail runner there. 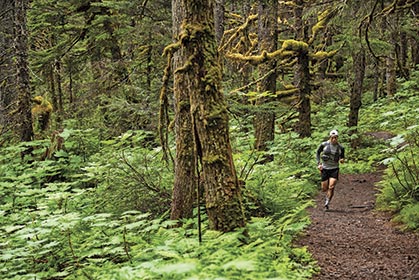 > Seasons: July, August and early September are best for trail running, as snow has melted out in the high country.

> Sleep: Who needs it when it’s light 17 hours a day? Downtown Anchorage has a dozen hotels to choose from—make sure the blinds work.

> Eats: Glacier Brewhouse is a nice sit-down restaurant and microbrewery. Gwennie’s Old Alaska Restaurant offers local flavor, Simon and Seafort’s is a good grill and Humpy’s Great Alaskan Alehouse is open until 2 a.m. if you need a nightcap.

1. Resurrection Pass Trail. One trailhead is about an hour’s drive south of Anchorage. One of Alaska’s few organized ultramarathons—Resurrection Pass Ultra Trail Races 50- and 100-milers—is on this trail.

2. Lost Lake Trail. A 16-mile lollipop loop, 1.5 hours south of Anchorage. Follows a creek up to junction just before a cabin and large meadow. Great views of large valley below. Fast singletrack.

3. Crow Pass. About 25 miles with one river crossing and astounding views of mountains rising 6,000 feet above.

5. Rabbit Lake. Ten to 12 miles roundtrip, just a few minutes drive from downtown Anchorage. Or to up the distance (to about 25 miles), keep going and end up at McHugh Creek parking lot.

6. Kesugi Ridge Trail. Great views of Denali when the weather is good, about three hours north of Anchorage, close to Denali National Park.

How This Hoka Trail Runner Became My Favorite Tackle-Anything Shoe