Running the Chugach Front’s highest peaks in a day 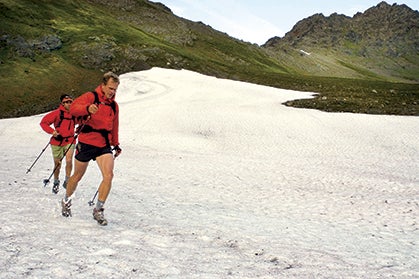 The author and Trond Jensen romping through snow on their Chugach linkup. Photo by Matt Hage.

Passing through Anchorage on any Alaskan wilderness adventure, you’ll see the Chugach Mountains (aka the Chugach Front) rising like a barrier to the last frontier. At the city’s edge, houses give way to dense alder bushes. At 2,000 feet, hard tundra and wind-thrashed hemlock take over. Higher still, toward the mountaintops, tundra fades into greywacke boulders, snow and then just sky. Beyond that skyline, mountains stretch uninterrupted through Canada and into the lower 48.

My wife, Cathy, and I climbed several Chugach Front summits, but she demolished her knee and I was marooned without my adventure partner. Staying closer to home, I began running alone after work in an adrenaline-induced dream state through the Chugach Front, often returning home in 1 a.m. twilight. By September, I’d tagged all 35 named summits in the Chugach Front, but I still craved a final challenge. I just hadn’t dreamed it up yet.

Then last winter, I met Trond Jensen at the Scandinavian Peaks hut deep in the central Chugach Mountains. While a blizzard raged outside, I discovered that Trond’s Norwegian blood kept him one of Anchorage’s top Nordic skiers, even at 46. When the snow melts, he applies his granite-solid endurance to mountain running. I also learned that topping his tick list was snagging the first one-day linkup of the Chugach Front’s 12 summits over 5,000 feet. “That sounds like fun!” I said.

“Then come along,” Trond said.

“Yeah, but there’s no way I could keep up.” I imagined myself limping along behind Trond and his burly mountain-running contingent.

Over the next two years, I realized that while many Anchorage athletes could physically complete the 33-mile, 20,000-vertical-foot Chugach Front linkup, few knew how. Only Shawn Lyons of Anchorage had pieced together a route. In 1990, he pulled off the linkup in 34 hours. Trond and I pooled our knowledge and developed a route similar to Shawn’s, except we wanted to do it 10 hours faster. 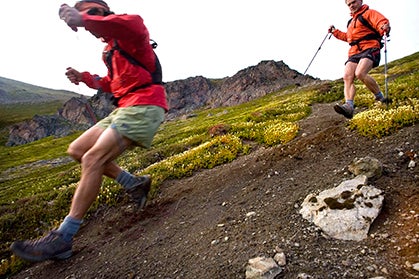 At 4 a.m. on July 9, Trond and I left the Rabbit Creek trailhead, jogging with trekking poles and running packs and hoping for a break in the low cloud ceiling. We planned on running from the south end of the Chugach Front at Rabbit Creek to the north end at Snowhawk, climbing the 12 highest peaks along the way. But at Rabbit Lake, five miles in, the infuriating fog encased us. We tried dead reckoning through the miasma, but ended up on the wrong side of South Suicide.

Trond and I regrouped and gambled, going around to the north. We dropped 500 feet and contoured on solid snow.

“Ahoo!” I yelled, and the sound reverberated in a rock-walled gully. “Here it is, Trond!” We’d lost 45 minutes, but were back on track, climbing the gully and breaking above the clouds to tag South Suicide’s summit. An hour later we had traversed North Suicide and were descending a wet sheep trail above 200-foot cliffs—the linkup’s most technical section. The exposure reminded me of my former passion for alpine climbing and spurred me into moving faster, until I noticed Trond had dropped behind. Be patient, I told myself, Trond will be waiting for you on the last summit.

Past the technical ridge, we swam through fog up Avalanche Peak. On the summit ridge, the mist parted and our shadows cast onto the clouds below. A rainbow halo encircled our shadow’s head. Seeing the Specter of the Brocken (a rare optical phenomenon) always served me good luck.

Deep scree, an old pipeline road and a human foot trail led us to The Ramp, where Cathy and Andrew McCarthy met us with sandwiches and cheers. Trond and I traversed boulders at the angle of repose across to Hidden Peak, then climbed O’Malley Peak, the easiest and most popular 5,000-footer. We’d tagged six peaks in 10 hours, but six peaks lay ahead, followed by a bear-infested bushwhack to the road.

Easy running on hiker trails led to a snow couloir up Mount Williwaw—the Chugach Front’s highest summit at 5445 feet. From there, we followed a wide sheep trail along a gendarmed ridge to Koktoya. East Tanaina, West Tanaina and Tikishla passed in a blur of torrential rain, boulders  and ibuprofen. When we reached Snowhawk Valley below Temptation Peak—the 12th and last summit—our knees felt like rebar with sandpaper hinges, yet our energy levels remained high. Trond was even getting stronger. I sucked down two caffeinated gels, loaded my water bladder with Cytomax and started up the final 2000 feet. Below the summit we dropped our packs by a glowing turquoise lake. I followed Trond step for step to arrive at the summit at midnight.

Trond took a photo and we headed down. A hundred feet below a pang of hunger hit my stomach as if I was digesting an angry starfish. My head erupted with sweat. “Hey, Trond. Is that lake down there flashing or am I seeing things?” I said.

“No flashing,” Trond said, his accent stronger with exhaustion.

“Everything is blurry except for that flashing lake,” I said. I’d never bonked before, and the visuals fascinated me.

“We’ll be down to the packs in a few minutes.” Trond said, as if hallucinating partners were normal. Back at the packs, I inhaled 600 calories and the visuals vanished. I followed Trond in a shivering daze for the next three hours as he plowed through neck-deep grass, all the while yelling, “Hey, bear!” We ran the last half mile of gravel road, chatting and wondering how we’d function at work in five hours. The time was 3:21 a.m. We’d pulled off the first traverse in 23 hours and 18 minutes.

Our friends Matt Hage and Agnes Stowe met us at the Snowhawk parking lot with quizzical smiles.

“How was it?” Matt said, as if he expected us to be crawling.

“The real adventure was figuring out the linkup,” said Trond. “Today was just the summit.” Now our obsessive mentalities could move on to new adventures. We knew that just beyond the Chugach Front is the Western Chugach, where 21 peaks rise above 7,000 feet. 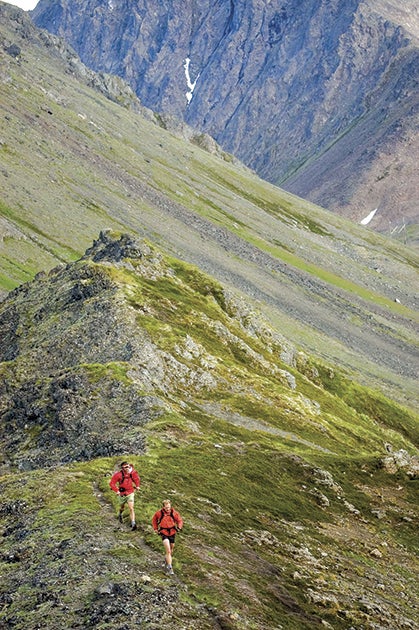 The Chugach Mountains are visible from Anchorage, and offer trail runners a plethora of alpine options within easy reach. Photo by Matt Hage.

CLASSIC RUNS IN THE CHUGACH FRONT

LINKING UP THE CHUGACH FRONT

This article originally appeared in our January 2007 issue.