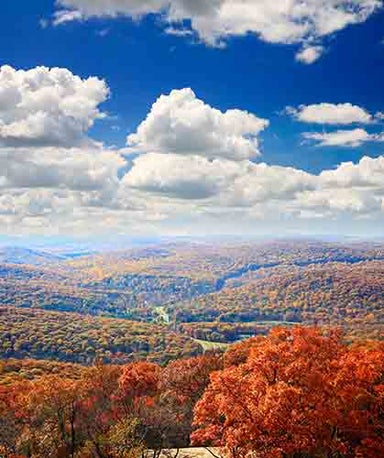 Bear Mountain State Park is located just over an hour from New York City and features hundreds of miles of trails.

The shiny skyscrapers extending so high that you can’t see their tops, the international food vendors plying your appetite with tastes of their home country, the massive green-space respite of Central Park, the all-business bustle of Wall Street’s financiers, the flare of Broadway and dozens of other performing-arts venues, the city’s five boroughs and their unique characters … New York City has unmatched diversity in pretty much every way we classify the human species.

New York City is also, surprisingly, a hub of assorted trail-running opportunities. Central Park and a number of other parks around the boroughs offer soft-surface outings within the proverbial urban jungle. Then, starting at about 20 miles north of city center and beyond, larger, wilder natural areas offer tough, technical trail running comparable to wild territory around our country.

NYC is designed for pedestrian and public-transport travel. In fact, NYC dwellers often walk more in a day than many people run. Fill a small daypack with what you’ll need to run and tour the city and embrace walking as your means to play (and cross train). It’s time to meld into the melting pot of America.

> An estimated 8,244,910 people live in 305-square-mile New York City, making it both the most populous and densely populated American city.
> Roughly 36 percent of NYC’s population was born outside of the United States.
> With 47,340 finishers in 2011, The ING New York City Marathon is the world’s largest road marathon.

Get There. Three airports serve NYC: John F. Kennedy International, Newark Liberty International and LaGuardia. Use the region’s vast public transportation system from any of them to get downtown. You can access most trail-running and tourism ops via a combination of public transport and foot travel. Rent a car for a day trip to Bear Mountain and Harriman state parks.

Play Tourist. Join a guided ranger tour at the Statue of Liberty National Monument on Liberty Island to learn about America’s immigration history. Do NYC theater right and take in a Broadway show. Wander Central Park and be shocked at so much green in this monstrous city. Sample street cuisine from around the world at one of the city’s 4000-plus food carts.

Take Note. Though NYC possesses the lowest crime rate among the United States’ largest cities, petty theft does occur. Keep your valuables out of sight and reach. Better yet, leave everything but the bare essentials in your hotel room.

Learn More. NYC’s fascinating history is detailed in this tome, Gotham: A History of New York City to 1898, by Edwin G. Burrows and Mike Wallace. Check out The City of New York’s comprehensive website to learn everything you need to know about visiting.

Appalachian Trail out-and-back in Bear Mountain and Harriman state parks.
Fifty miles north of the city are these dueling state parks, which together possess more than 230 singletrack miles. Park at the developed area on the east side of Hessian Lake in Bear Mountain State Park and run south on the Appalachian Trail as far as you like. “I give this area five out of five stars for technical terrain and scenery, and four out of five stars for elevation change,” reveals Portera. Views from the Perkins Memorial Tower of the Hudson River and the region’s rolling topography will impress.

Rockwood Ramble 10K.
A June race on the paved and buffed-out dirt trails of the Rockefeller State Park Preserve.

Paine to Pain Trail Half Marathon.
Taking place in New Rochelle, which is 23 miles northeast of NYC, in October, says Portera, “This race runs on dirt, rocks and roots. You might share the trail with deer, foxes, coyotes, hawks, wild turkeys and rabbits.”