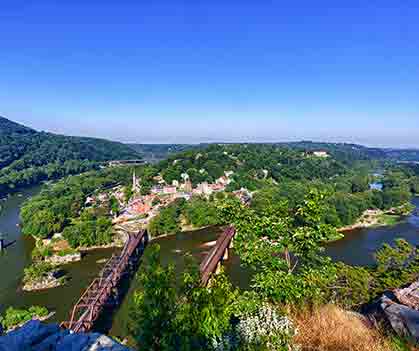 Harpers Ferry, a town steeped in history, is rich with nearby trail options.

Harpers Ferry was patented in 1750 by Robert Harper, who made a ferry point across the Potomac River for westward settlers in 1761 and established it as a town in 1763. In its history, the village has also served as a home for the United States Arsenal and Armory at Harpers Ferry, the site of John Brown’s Raid and one of the towns along the Chesapeake and Ohio Canal (C&O). It was so fought over during the Civil War that it changed hands eight times! Today, this history is commemorated in the historic buildings, museums, interpretive exhibits and trails of Harpers Ferry National Historic Park as well as the rest of tiny Harpers Ferry proper.

Suffice it to say that people have been wandering the Blue Ridge Mountains, which rise as curved, thickly forested hills above Harpers Ferry, for quite some time. As you trail run on the C&O Canal Towpath, imagine the boats that carried supllies to other communities. When you crawl along the Appalachian Trail, you’ll see the view that inspired Thomas Jefferson to say, “This scene is worth a voyage across the Atlantic.” And, when you’ve had your fill of dirt, explore the narrow, steep streets and historic buildings that look the same as 200 years ago. Become a part of the United States’ history.

> At least 30,000 troops took part in Civil War battles in and around Harpers Ferry.
> Harpers Ferry covers 0.60 square miles of land area and contained 286 permanent inhabitants at the 2010 census.
> 2 rivers, the Potomac and the Shenandoah, and 3 states, West Virginia, Virginia and Maryland, merge near Harpers Ferry.

Get There. Fly into Washington, DC, or Baltimore, Maryland, airports, and rent a car for the less-than-90-minute drive to Harpers Ferry from any of them. Or, travel by train on Amtrak’s Capitol Limited Line or the Maryland Area Regional Commuter Brunswick Line into Harpers Ferry.

Play Tourist. Stop by the Harpers Ferry Appalachian Trail Visitor Center. Wander the buildings and museums of Shenandoah Street to get your historical bearings. Drive 30 minutes north to infamous Antietam National Battlefield for a Civil War history lesson. In the heat of the summer, Davis recommends cooling off by “renting a tube for a tame float on the Shenandoah River.” Take an evening ghost tour for an otherworldly perspective of the historic town.

Take Note. The historic ruins of Harpers Ferry National Historical Park are fragile and protected by federal law. Enjoy but do not climb, sit on or touch them.

C&O Canal Towpath out-and-back.
The towpath is a flat, wide, hardpack trail next to the C&O Canal’s 184.5-mile length between Georgetown, Washington, DC, in the south and Cumberland, Maryland, in the north. It passes through Harpers Ferry at about mile 61. Use the pedestrian bridge to cross the Potomac River and run as far as you like on the towpath in either direction.

Appalachian National Scenic Trail out-and-back.
The 2181-mile Appalachian National Scenic Trail passes through Harpers Ferry in a fairly north-south fashion. It’s easiest to run south on the trail from just west of Saint Peter’s Catholic Church, following the trail’s blazes up the tall stone steps and out the single track as far as you dare. Don’t miss (Thomas) Jefferson Rock and its view of the Blue Ridge Mountains yielding to the wide, lolling and rocky Shenandoah River.

Sleepy Creek Wildlife Management Area trails.
Explains 41-year-old Paul Davis, a local trail runner and dentist, “The area is tough and beautiful. And, outside of hunting season, you’ll have it to yourself.” Access these 50-ish miles of trails from the developed area on the east side of Sleepy Creek Lake, which is a 40-mile drive northwest of Harpers Ferry. The trails run through thick hardwood forests, over short-but-digger climbs and among true East Coast wilds.

Catoctin 50K Trail Run.
Says Davis, “In nearby Gambrill State Park, this is old-school trail racing. The course is technical, unmarked and the race happens in hot and humid July.”

JFK 50 MILE.
Each November since in 1964 (though the race was first held in the spring of 1963), runners fly through Harpers Ferry on the C&O Canal Towpath during what Davis calls the “the granddaddy of ultramarathons.”