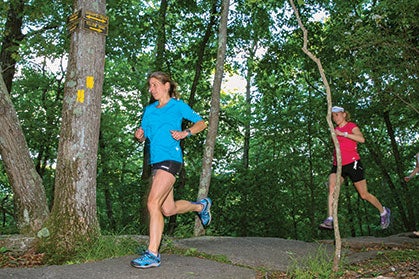 “If you know New England, you know we are historically parochial,” says Scott Livingston, the 40-year-old trail runner, president of Horst Engineering and resident of Bolton, the town just east of Manchester. “Each of Connecticut’s 169 towns is fiercely independent with its own library, school system and fire house. But for all this fragmentation, the state has one of the best trail networks in the country.”

Debbie Livingston, Scott’s wife and a 38-year-old ultrarunner, fitness trainer and yoga instructor, elaborates, “It began with each town creating its own trail system,  something that local residents could  call theirs. Now, all of these systems are connected into the elaborate network  we have today.” Adds Scott, “And  Manchester, well, it’s smack in the middle of it all.”

Manchester began as a farming village in the second half of the 1600s, and then progressed to an industry center in tandem with Hartford in the 1800s. Back then, Ralph, Ward and Frank Cheney, along with their business partner, E. H. Arnold, opened a silk mill. One mill grew into the world’s largest silk-manufacturing facility, and Manchester bolted onto the international map as a producer of fine textiles.

Today, Manchester is a 50,000-plus-person city with a bustling, service-centered main street and more than 1000 acres of open space filled with singletrack and linked to the rest of Connecticut’s trails. “Our trails are New England-style, always rolling and always rocky,” says Debbie.

> GET THERE / The closest airport, the Bradley International Airport, is located 23 miles northwest of Manchester. Hartford, just west of Manchester, has a Greyhound terminal and an Amtrak station. You can get to Manchester from any of these places by CT Transit buses. You might still need a rental car to access some trail- heads beyond Manchester.

> BE A TOURIST / A post-long-run must-do is Shady Glen Dairy Stores, an old-fashioned diner that opened its doors in 1948. Milkshakes, ice-cream sundaes, hamburgers and fried cheese are served, according to Debbie, “by staff still wearing the old uniforms and paper hats.” also visit Divine Treasures Chocolates Factory and Store, where organic, vegan and gluten-free chocolate is made and sold.

> TAKE NOTE / The historic Manchester road race takes place annually on Thanksgiving Day with thousands of participants and even more fans. Scott recommends it: “the 77th edition takes place this year. It’s a rite of passage for all runners, road and trail alike.” if you visit for the race, take note that Manchester becomes a tangle of traffic and booked hotel rooms.

1838 Year the largest silk mill in the world was established in Manchester. Visit the Cheney brothers Historic District to learn about it. 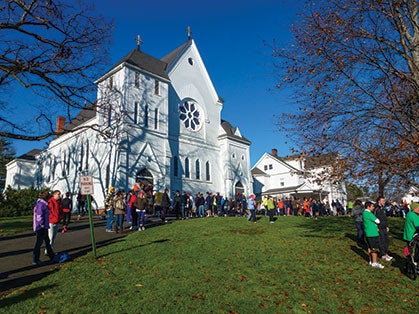 > CASE MOUNTAIN RECREATION AREA / At 640 acres and with 10 miles of rough-and-rocky singletrack, this is the go-to place for the burliest trails. Says Scott, “Both pedestrians and mountain bikers love Case Mountain.” adds Debbie, “and the views of Hartford from the top of the mountain are amazing.”

> SHENIPSIT TRAIL / This 41-mile point-to-point trail runs right through Manchester (via case mountain) and is part of Connecticut’s blue-blazed trail system. “Run it point-to-point,” says Debbie. “It’ll take you all day. You can even jump off the trail, run a short distance on roads to the famous Shady Glen Diner for milkshakes and then continue on.”

> FINALLY SPRING 5K! / This in-Manchester trail race welcomes spring every march with a lollipop course around porter reservoir on the east side of town (manchesterrunningcompany.com/events/ finally-spring-5k).