Philadelphia is known as the home of the Liberty Bell, Rocky and historic Boathouse Row … 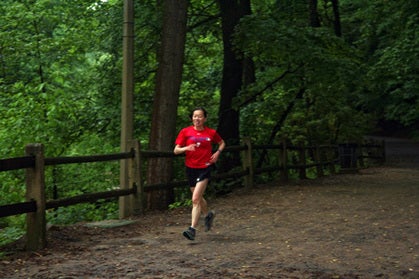 Philadelphia is known as the home of the Liberty Bell, Rocky and historic Boathouse Row, which has sheltered the boats of generations of Schuylkill River scullers. The river parallels Kelly Drive and a path that leads to the trails of the Wissahickon Valley and Fairmount Park, with over 50 miles of technical, singletrack trails.

During the summer, beech trees engulf the runner, and rickety bridges, wooden logs and protruding roots cover the trails. In the fall, the foliage changes from bright green to rich yellows, reds and oranges, while the Walnut Street Bridge overpass provides urban contrast with the vibrant hues of graffiti.

Several trail groups frequent the area, including the Pagoda Pacers, the Trail Dawgs and the Wissahickon Wanderers. Dan Gordon, 60, of Philadelphia, Pennsylvania, founded the Wanderers 10 years ago, realizing the Wissahickon’s trail running potential. “No one was promoting it,” he says, “so we ended up growing into that role. It’s a jewel for Philadelphia-area runners.”

“Philly is more of a mom-and-pop scene,” says Gordon. “You don’t have to be a star to run with us. We welcome everyone.”

However, Philly’s trail racing scene has grown immensely and Pretzel City Sports (PCS) in Reading, Pennsylvania is the leader in organizing events. Founder Ron Horn, 60, of Reading, does not design races to be light, breezy jaunts through the woods. Featuring formidable obstacles such as the “128 Steps From Hell,” a series of stairs that lead directly up the side of a cliff, Horn’s races are unique and draw upwards of 600 people.

Horn is perpetually late to his events. Last year at the April Mount Penn Mudfest, the weather was still freezing cold, and Horn was over 20 minutes late to the start line. This year, he was on time (barely), and started the race by shooting a children’s pig toy out of a cannon. His sense of humor is well known—his aid stations usually include an “alternative beverage,” such as beer or tequila. Despite, or maybe because of, his eccentricities and a penchant for wildly inappropriate jokes, Horn has helped elevate Philadelphia’s status as an emerging trail-running town.

Four Corners Run. 5515 feet of elevation gain make this 20.65-mile run around the Valley a daunting challenge, and its varied terrain ranges from the gravel of Forbidden Drive to the steep, tree-canopied, rock-filled Payne Hill.

Orange Trail. The Lavender Trail is a 7.5-mile tour of the Wissahickon, with undulating hills, dirt singletrack through waist-high grass and a few steep downhills with twisting roots and loose rocks.

Pennypack Park. Featuring 15 miles of trails alongside Pennypack Creek, most runs include a combination of paved bike path and gentle, rolling single- and double-track with minimal elevation.

Half Wit Half Marathon, August 14, 2011, Reading, Pennsylvania. With joke signs such as “Why is the Half Wit like Paula Abdul? It doesn’t make any sense,” peppered along the course, this race is as amusing as it is challenging. Featuring the infamous “128 Steps From Hell,” the Half Wit is the toughest PCS race. www.pretzelcitysports.com/halfwithalf.html

Megatransect, October 1, 2011, Lock Haven, Pennsylvania. Register early for this popular 26-mile race is held in Central Pennsylvania—this year it sold out all 850 spots in a record 48 hours. Expect a vertical gain of over 5000 feet (see Take Your Mark, August 2009, Issue 60). www.ultrahike.com/Home_Page.php

Mount Penn Mudfest 15K Trail Race, April 23, 2011, Reading, Pennsylvania. Consistently named one of the best trail races on the East Coast (“One of the top six races in the United States,” Men’s Journal, fall 1998) the Mudfest is described by race director Ron Horn as including “elements that are as unique as a hit drama on NBC that doesn’t start with the words `Law and Order.'” With muddy trails, severe up- and downhills, water crossings and Horn’s signature “alternative beverage stations,” this race as it all. www.pretzelcitysports.com/mtpennmudfest.html

Wissahickon Trail Classic 10K, June 6, 2011, Philadelphia, Pennsylvania. Now in it’s sixth year, the Trail Classic shows off the best of the Wissahickon. Run over the Thomas Mill Covered Bridge, down steep switchbacks and up unrelenting Payne Hill to the finish. www.wissahickonrestorationvolunteers.org

Why run trail races at night?

I was looking to direct something more gonzo. A lot of our members [of the Pagoda Pacers] had run ultras that required you to run all night and it sounded like a heck of a good time. A few years ago, we debuted the Dark and Dirty.

We have five or six major pretzel manufacturers here in Reading, so in June 1996, Pretzel City Sports was born along with our logo, “Events with a twist.”

What do you think has caused the rapid growth in trail racing?

It is the type of running we did as kids, with varied stride lengths and lots of adventure. I never run a trail course and fail to see something new. I consider trail runners the “Grateful Dead followers” of the running community. They are there for the entire experience, not just for the race itself.

We are working on growing our Bouncing Buns Clothing Optional 7K Trail race this year. In 2010 we had 56 people, 80 percent of which were in some state of undress.

What is your favorite race?

The Mount Penn Mudfest 15K. It is the first one I created, and has so many funny aspects–the margarita stop, the raw egg run, the hidden Easter eggs along the trail. With a cap of 825 runners it remains, in it’s 17th year, the third largest trail run in the United States and the largest east of Pikes Peak.