With cab fare, a subway metro card and trail gear, a New Yorker flees the city

This article originally appeared in our May 2006 issue. 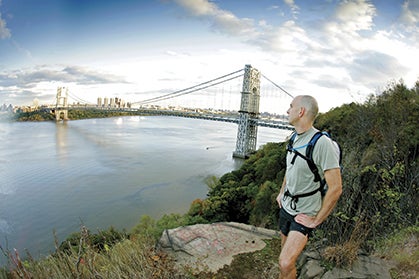 The auhtor ponders his return to the masses via the George Washington Bridge, ending hs 39-mile urban adventure.

New York City has many aliases—Big Apple, City that Never Sleeps, Capital of the World—but  “Trail-Running Mecca” is not one of them. I moved here just as I swore off running on asphalt and concrete—an inauspicious clashing of my career and athletic goals.

After a few months, I discovered some trails around the city. There’s a loop in Central Park you can run until you’re dizzy or trampled by the crowds. Head over to Brooklyn for a handful of dirt routes in Prospect Park. Then, there are the paved “trails” (yes, I know) along the Hudson and East Rivers that begin to look awfully tempting. But none of these would occupy an entire day or be mistaken for epic. I needed a long dirt-ridden escape that would shatter the claustrophobia of Manhattan living, and could be accessed (I had no car) using only that glorious and infuriating pinnacle of mass transit—the subway. 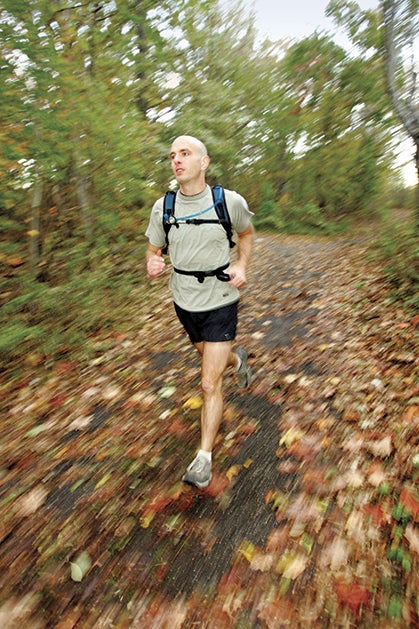 Savoring the loop’s last section of dirt on the Long Path,

I concocted a plan: take the subway north from Manhattan to Van Cortland Park in the Bronx, run north to the Tappan Zee Bridge, cross to the town of Nyack, and then

run south along the Hudson to the George Washington Bridge and back into Manhattan. Total mileage would top 39 miles and I’d gain a hilly total of 6471 vertical feet.

The city’s 4 train grinds north through Manhattan and the Bronx before coming to a final stop at Woodlawn Cemetery and the edge of Van Cortland Park. The park itself has a network of paved and unpaved paths sprawled through 1146 acres. My target, the Old Croton Aqueduct (OCA) Trail, runs 26 miles north from New York City to the New Croton Reservoir. This mostly dirt trail sits atop a 19th-century, brick-lined tunnel that delivered water to the city for 113 years; parts of it are still in use.

The OCA leaves Van Cortland Park and enters Westchester County, crossing a few streets, some parks and one freeway before entering downtown Yonkers, a complicated place that could use a bit more civic pride. Parts of the Yonkers OCA cross through a dump, literally. A shredded piece of plastic catches my ankle above the shoe cuff and cuts through my sock but doesn’t break skin. I clamber up a hill of box springs, broken toys and please-let-it-not-be-human feces, and hit the pavement of downtown. After this short stretch, my feet return to a dirt path.

Tarrytown is a historic Hudson River town that is both a commuter community and a weekend destination. Here, the massive Tappan Zee Bridge crosses the river at its widest point, connecting Tarrytown and Nyack. This is also the location of the biggest flaw in my loop plan. The Tappan Zee doesn’t allow pedestrians. But there is a bus, albeit an infrequent one.

I had been monitoring my watch, but distances and arrival times are tough to estimate on a first-time run. Reaching Tarrytown, my fears are confirmed—I’ve missed the bus by 15 minutes, a gap that is suspiciously close to the amount of time I hit my snooze alarm this morning. Undeterred, I remember that this is the greater New York area, so I call a cab. 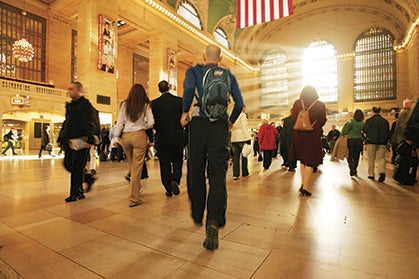 Amid the hoards, Bennett begins his solitary outing from Grand Central Station.

The cab deposits me near a Nyack strip mall, and I manage to find the trail, an unmarked little route that slips up a hill. This is the Long Path, an undulating singletrack trail marked by green blazes. Brilliant autumn forests of maples, oaks, birch and hickory escort me southward, back toward Manhattan.

The Long Path weaves through several parks, leapfrogging between major trails and lesser paths. Passing through Clausland Mountain Park, I’m so focused on the trail’s technical footing that I lose the blazes. I backtrack, and realize I missed a key turn.

With 20 miles behind me, I’m over half way. During these first 10 miles from Nyack, I pass three backpackers and a very large, very naked man who cavorted past me in a cemetery. He may have been wearing shoes, but I didn’t dare to check.

The path dips into the town of Piermont and soon crosses into New Jersey on a series of stone stairs improbably placed in the middle of the woods. Foot traffic and road crossings increase as I approach the George Washington Bridge and enjoy sprawling Hudson River views from atop sheer basalt cliffs. Over 22 million people live in the New York metro area, but I’m mostly alone, save for a probably drunk group of well-coiffed bridesmaids giggling through a patch of poison ivy.

At about 38 miles, the Long Path ends and signals a sad return to concrete on the George Washington Bridge. My knees whisper a word of thanks as I slow to a walk and enter the closest subway station.

I sit down on the A train, back among the urban dwellers and declare the Subway Loop a success. I found solitude, scenery and dirt, just a Metrocard swipe away. As I return to the grid of streets, Manhattan’s skyscrapers are no less tall. But now I can see the horizon beyond them more clearly.