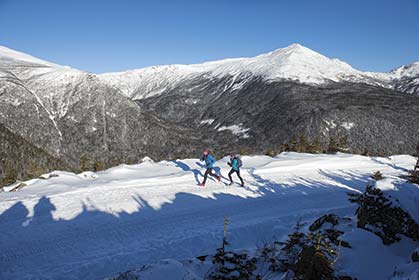 The author (left) and Cath Goodwin on a fair winter day on Mount Washington, with the Great Gulf Wilderness and Mount Adams in the background. Photo by Ernie Mills.

This article originally appeared in our March 2015 issue.

It’s February 25. The temperature is -10 degrees, the wind from the Northwest gusting to 50 mph, and a ground blizzard is starting to take shape. Graupel, snowflakes encrusted in ice, stings my face. The wind begins its familiar games, slowing my pace.

I am running on the Mount Washington Auto Road, my feet wending their way through icy “death cookies,” left by a Bombardier snow tractor, the only vehicle passing this way this time of year. In places, the road is scoured to dirt or pavement. Elsewhere, drifts up to three feet have accumulated and hardened into frozen waves in mid-break. I keep my head down and stare at the undulating ridges left by the machine’s mechanical track.    After an hour and 50 minutes, I’m a mile from the summit of the Northeast’s tallest peak.

There are other ways up this mountain. Plenty of them. A mile away, ice climbers are swinging their tools up Pinnacle Gully in Huntington Ravine. Backcountry skiers are kicking steps into the headwall of Tuckerman Ravine. Dozens of hikers will be taking Lion’s Head Trail up to the summit. But here, alone on the north slope that drops away to the Great Gulf Wilderness, I’ve picked an idea that’s either ingenious, idiotic or a bit of each. And, by this mountain’s winter standards, it’s not a half-bad day to go for a run.

In the White Mountains of New Hampshire, Mount Washington stands at 6,288 feet, but its statistics are practically unrivalled for a mountain of such small stature. Only the planet’s poles and highest peaks come close. Winds exceed the 75-miles-per-hour threshold for hurricane force over 100 days each year, earning the mountain its moniker as “Home of the World’s Worst Weather.” For over 60 years, the peak boasted the world’s highest recorded wind gust: 231 mph, on the afternoon of April 12, 1934. The summit is in the clouds over 300 days each year. More than 135 people have perished from injury and exposure on its slopes.

I live in the heart of the White Mountain National Forest, so Mount Washington is in my backyard—and, in that regard, I consider myself lucky. In more summery conditions, my dog Samivel and I can run from the door of my house to the summit.

And, each June, I find myself among the 1,300 runners who take part in the annual Mount Washington Road Race to the top of the peak affectionately dubbed “The Rockpile” by the handful of year-round summit residents who work for Mount Washington State Park or the Observatory. The course climbs 4,618 feet over 7.6 miles, with with an average grade of nearly 12 percent.

The mountain and I, we’ve reached an understanding in the last year. I accept it on its terms, without expectations of what each run will bring. Sometimes, I get lucky, and reach the summit. Whatever the outcome, it’s never dull.

Today started routinely enough. Rising before dawn, I opened my laptop to check the vertical temperature profile along the road, measured by automatic weather stations operated by the non-profit Mount Washington Observatory. My mind ticked through the game plan. The forecast called for deteriorating conditions, so I planned to run the four miles to treeline,
then re-evaluate.

I stared at my gear, strewn on the floor the night before: trail-running poles, balaclava, down sweater, wind shell, heavy-weight long underwear, goggles, snacks, a small thermos with hot tea, arctic mitts, hand warmers, MICROspikes and carbide-spiked trail-running shoes. With a bit of luck, a few hours from then, I would have ticked off the run to the summit of Mount Washington. 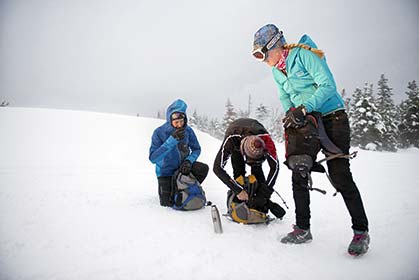 For years now, each spring, my mountain-running season has started with this road. In the early morning hours before work, I’ll run through the birch and maple groves, into the still snow-covered boreal forest, and finally above treeline to the post that marks my spring turnaround, four miles in. Later, as the race nears, my goals move up the mountain: The Horn, Cragway, Five-Mile Grade, Mother-in-Law’s, Hairpin, Cow Pasture. On this road, each turn has a story.

Some friends scoff at the idea of running on the road—any road. But, catch the Auto Road before the gate opens in the morning, and you’ll be treated to alpine vistas as good as any trail, meandering twists and turns right up there with my favorite singletrack and, save for the occasional moose or bear, total solitude.

Last year, it just sort of happened. Rather than ending my season on Mount Washington with the Road Race, like Forrest Gump, I somehow just … kept … running. I ran the road once a month the rest of the summer, and into the fall. When temperatures dropped and the foliage turned, I was still on the road, grinding my way uphill.

In the months that followed, I experienced the mountain in all conditions. I had fair-weather runs, Samivel at my side as a fall sun broke over the Carter Range, not the slightest breeze rustling the blazing red, orange and yellow foliage. On the summit that particular morning, the Atlantic Ocean glittered in the distance, and the Observatory reported visibility over 100 miles. A month later, I found myself leaning at 45 degrees into a steady 60-mph wind. In half an hour, I had not made even a mile’s progress. I called a truce, spun around and took gigantic, wind-assisted leaps back toward the valley.

In my years playing on the Presidential Range, I have been unceremoniously pile-driven to the ground by wind gusts, and lost above tree line in dizzying fog. This arctic microclimate breeds humility. It has to, if you want to come back to play another day. Like much bigger brethren, Mount Washington always calls the shots, no matter how much Gore-Tex you’ve amassed on your side of the equation.

Back on the Auto Road, I turn the corner at the seven-mile post. The ground blizzard is swirling madly, and in its midst, the summit comes and goes from sight, now less than a mile away. Mixed into the roar of the wind comes a familiar man-made rumble. I look back and see the Observatory’s snow tractor gaining on me. The “Obs” is ferrying staff to the summit as part of their weekly shift change. I step to the side, punching into a drift of snow that’s been sculpted by a month’s worth of scouring. The tractor grinds past.  Inside, passengers wipe the condensation from the windows and stare incredulously at me, like deep-sea divers eyeing an exotic fish. Tentatively, one of them waves. I raise a mitt in friendly acknowledgement. It must be cozy in there, I think.

It’s harsh in my world, but I like it. Besides, in a few hours, I’ll be drying clothes by the fireplace. I pull the icicles off my balaclava, angle my head into the wind and keep running.

Doug Mayer lives in Randolph, New Hampshire, at the base of the Presidential Range. He is the owner of the trail-running company Run the Alps. He was given special permission from the Mount Washington Auto Road Company to run the private road in winter.