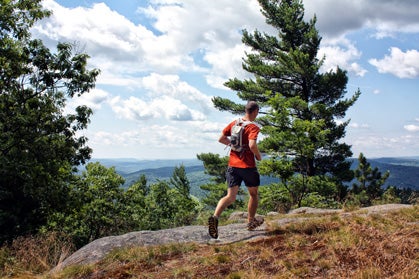 Fifteen minutes after leaving the Town Forest trailhead in West Windsor, Vermont, I’m so disoriented I might as well be blindfolded. The sudden hairpin turns and screaming downhills that are a hallmark of this trail network—called the Sport Trails of the Ascutney Basin—induce the sort of adrenaline rush usually associated more with skiing than with running, which might explain why I’m having trouble keeping my mind on navigation.

Fortunately, I’m with Jim Lyall, who not only runs these trails regularly but also helped build them. Lyall and other locals have been running, biking and skiing here for years. For most of that time the trails were visited only by the fortunate few who knew about them. But that changed in 2010, when Mount Ascutney ski area closed due to the owners’ financial troubles.

The ski-area closure has had a noticeable effect on the local economy, Lyall says. To keep tourists coming to the area, more landowners began opening their property for running and mountain biking. Now, local trail users are hoping that the mountain can become known for its singletrack rather than its ski slopes.

Scoot to Ascutney … and beyond

Mount Ascutney looms over the Upper Connecticut River Valley region of Vermont and New Hampshire, an area that is home to endless miles of trails. The Sport Trails of the Ascutney Basin are home to 25 trail miles, with the primary trailhead now located near the empty ski lifts at Ascutney Mountain Resort. The trail network cuts across the ski slopes before entering the woods on a mix of old logging roads and singletrack.

Just to the north of Ascutney, in Woodstock, Vermont, another trail system makes use of carriage roads built in the 19th century and once owned by the Rockefeller family. The property is now a national historic site, and offers 20 miles of carriage roads and singletrack.

The carriage roads wind up and around the sides of Mount Tom (1250 feet), traversing open fields and skirting a small pond. From the summit, the church steeples, small shops and quiet streets of the village of Woodstock look like something from the set of White Christmas. Several peaks are visible to the south, including Ascutney. Although Woodstock is known for its fall foliage and its proximity to Killington, it’s also a prime destination for runners.

To the north of Woodstock, the Appalachian Trail (AT) traverses the Upper Valley, cutting east over small peaks and through forests to Norwich, Vermont, before crossing the Connecticut River into Hanover, New Hampshire. The AT runs right down Main Street in Hanover, making it one of the few spots in the country where you can “trail run” on pavement.

From Hanover, it’s possible to mix the AT with roads and other trails to create loops of just about any distance. One challenging 17-mile loop showcasing a mix of terrain heads north from Hanover on the AT for about six miles before hopping on a scenic dirt road that winds back toward town and another trail system. The loop is one of local runner Chad Denning’s favorite ultramarathon training runs. “That thing will chew you up and spit you out,” he says. “Whenever I do the whole loop without walking, I know my fitness is getting there.”

After years of running adventure races in Colorado, Denning moved east to the Upper Valley in 2004. He has since used the local trails to train for a number of ultras, including four in 2011, finishing in the top three in all of them.

“It’s unbelievable how many trails exist here,” Denning says. “I think it’s totally on par with what’s out West.”

Like Lyall, Denning is becoming involved with local trail running. He started the eight-mile Stoaked trail race in Hanover on the cross-country ski course operated by Dartmouth College, and more recently he put together the eight-race Western New Hampshire Trail Racing Series and a series of winter races up local ski slopes, a tradition he says he brought with him from Colorado. 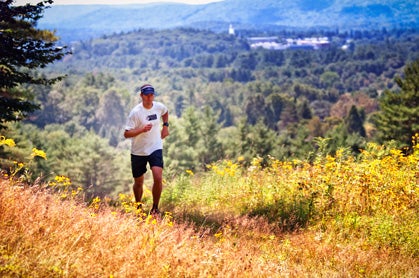 It’s not just the running that reminds Denning of the West. “The vibe in the Upper Valley is the East’s closest thing to being out West,” he says.

That means plenty of places to celebrate post run, including the Long Trail Brewery in Bridgewater, Vermont, just west of Woodstock. Harpoon has a brewery in Windsor, and a number of microbreweries operate in the area as well. In fact, Vermont has the most microbreweries per capita of any state, and New Hampshire isn’t far behind.

The Upper Valley also seems to have a high per capita population of trail runners—and they all have their favorite local runs. In fact, talk to anyone in the area and there’s a good chance they’ll say that easy access to trails is a big reason they live there.

Lyall, for example, graduated from Dartmouth College, in Hanover, New Hampshire, in 1970, and four years later returned to the area for good, in no small part because of the landscape. If he has his way, he’ll start to see more runners finding their way to trails in the Upper Valley—and perhaps losing their way once they do.

Getting there. Mount Ascutney is about a 2.5-hour drive from Boston and 4.5 hours from New York City. The closest airports are about 1.5 hours away, in Manchester, New Hampshire, and Burlington, Vermont.

Accommodations and Camping.
Ascutney State Park offers 10 lean-to sites and 39 tent and trailer sites, plus quick access to the Futures Trail, a 4.7-mile trip to the top of Mount Ascutney. Storrs Pond Recreation Area has sites for tents and trailers and miles of trails from the campground.

Local inns offer plusher accommodations, such as the Norwich Inn (www.norwichinn.com), which sits just a couple of blocks from the Appalachian Trail. Woodstock, Vermont, is home to a number of inns, from the grand Woodstock Inn (www.woodstockinn.com) to small bed and breakfasts, such as the Farmhouse Inn (www.farmhouseinnvt.com). And a number of national chain motels can be found in Lebanon, New Hampshire.

Amenities. Caffeinate before a morning run at Boston Dreams Coffee House in Windsor or the Dirt Cowboy Café in Hanover. Reward yourself post run by sampling local microbrews. In Windsor, try Windsor Station Pub or the Harpoon Brewery. The Long Trail Brewery in Bridgewater, Vermont, The Brewery at the Norwich Inn in Norwich, Vermont, and Flying Goose Brew Pub in New London, New Hampshire, are all good spots for food and local beers.

Sport Trails of the Ascutney Basin (www.stabvt.org). Twenty-five miles of singletrack and doubletrack, plus nearby access to another 15 miles of trails at Ascutney State Park. The main trailhead is located about five miles west of Windsor, Vermont, at the Ascutney Mountain Resort.

Marsh-Billings Rockefeller National Historical Park. A mix of trails and carriage roads on rolling terrain. Access 20 miles of trails from the Billings Farm and Museum parking lot, located off of route 12 in Woodstock, Vermont.

Boston Lot. A maze of about 20 miles of rolling singletrack trails—with an infinite number of possibilities for loops—located in Lebanon, New Hampshire. There are multiple trailheads, but try starting from Lahaye Road to get quick access to Burnt Mountain, then cool off in the small lake.

Northern Rail Trail. For a flatter running option, take on some or all of this former railroad route, which stretches for almost 50 miles from Lebanon to West Franklin, New Hampshire.

Appalachian Trail. Most of the AT in the Upper Valley is runable, but a particularly scenic section—with rolling hills, open fields and beautiful hardwood forests—goes from Pomfret, Vermont, just north of Woodstock, to Norwich, Vermont, an 18-mile trip. Cut the run in half by stopping (or starting) in West Hartford, Vermont.

Vermont 50: The stunning fall foliage might ease the pain of the 50-mile (or 50K) run. The race is a unique event in that it crosses the property of 77 landowners. “There aren’t many people who would allow 1000 strangers on their property,” says race director Mike Silverman.
(www.vermont50.com)

Ascutney Mountain Run: It’s paved, but the steep 12-percent average incline makes up for it. Almost exactly half the distance and elevation of the much more famous Mount Washington Road Race, but with no lottery to enter. (www.club.penguincycles.com/AscutneyRun.html)

Road to the Pogue: A 6.1-mile point-to-point run on the carriage roads maintained by the Marsh-Billings National Historic site. The race organizers boast that the scenery and trails make this spot “the world’s best place to run.” After running there, it’s hard to disagree.
(www.roadtothepogue.com)

Western New Hampshire Trail Running Series: An eight-race series that runs from May to September in a number of Upper Valley towns, including distances from 5K to 14K. (www.wnhtrs.com)

Winter Wild: An eight-race series of winter races in which participants can run, snowshoe or ski up and down local ski slopes. (www.winterwild.com)

This article is from our December 2012 issue.