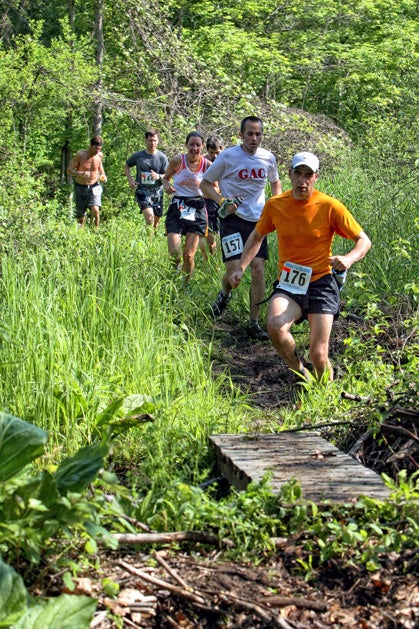 This issue appeared in our January 2011 issue.

Race through thick Connecticut woods in this lovingly quirky event.

You could say that race director Dave Raczkowski, known as “NipMuck Dave,” has some fun with his race. He bakes apple pies for awards and gives out six-inch branches with blue trail markings painted on them to every finisher. He states that the entry fee is: “$35, $50 if you’re rich.” And each year, he decorates the outhouse—once as a castle, complete with a water-filled moat—at the start/finish area.

This quirky, homegrown event has grown to one of the East Coast’s most popular and hard-to-get-into races. To keep field numbers reasonable and ensure a high finishing rate, Raczkowski restricts entry to anyone who’s done six races in the Grand Tree Series—20 races throughout New England from April through November. For out of towners, he’ll let you in if you’ve run a 50-miler. In 2010, this formula generated a 96-percent finishing rate.

Warnings on the race website and application, which he’s mailed out with mud splattered on them, “for effect,” he says, read: “If you don’t have health insurance, don’t do this race,” and, “Complaints about getting lost will be laughed at.”

“The real treat of this race is the pre-race briefing,” says 80-year-old Richard Busa, who’s run every NipMuck Trail Marathon since 1989. Raczkowski plays a humorous pre-recorded speech on cassette recorder before the start. This year’s speech alerted runners of Raczkowski’s retirement from race directing, which he assures won’t affect the vibe of the race. “I’ll still bake the pies,” he says, “and run the race.”

The NipMuck course is 26.4 miles, .2 miles over a standard marathon. It covers 13 of the 39-mile NipMuck Trail and is run in an unusual, double out-and-back format.

Runners start, finish and cross through the staging area at Parry Hill Road in Ashford, Connecticut. The start runs south on the NipMuck Trail for 6.2 miles, which Raczkowski describes as “a gentle glide down next to the Fenton River.” Runners then return on the same trail to the start at Parry Hill Road before heading out on the second out-and-back.

“The first half is a breeze,” says Raczkowski. “You do a quarter of a marathon and look at your watch and think you’re on record pace.”

The race’s second half, where runners head north for a quarter of a marathon, then back, is more hilly. Still, the hills in this region are rolling, with nothing over 300 feet of elevation gain in one shot.

“NipMuck is a classic New England trail,” says Ben Nephew, 35, of Mansfield, Massachusetts, who’s won the race three times, “with plenty of rocks and roots and enough hills to cause problems in the second half.”

Adds Busa, “Looking at a topographical map of the course fools a lot of first timers, because they don’t see much elevation change. But there are a few climbs, and they come at a point when you’re sucking wind. The roots and rocks make up for the elevation.”