Up and down on the 800-mile Finger Lakes trail

This article originally appeared in our March 2007 issue. 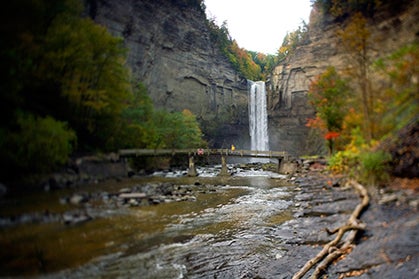 My partner, Steve Shaum, and I stopped, scanned the grid of ramrod-straight pine trunks and shook our heads. “Where’d the blazes go?” I asked. Steve and I had been blithely following the white blazes on a section of the Finger Lakes Trail (FLT), when we suddenly felt like we were in a hall of mirrors. Every direction looked the same. The ground was an even expanse of soft brown needles revealing no apparent trail, and the green canopy was punctuated by a cobalt late-summer sky. It was time to retrace our steps.

“There’s one!” said Steve after a short backtrack, and we continued on our 18-mile run through pines and hardwoods, over hills, across streams and to the edge of bluffs that mark the Finger Lakes Trail and associated Abbott Loop in Danby State Forest just south of Ithaca, New York. 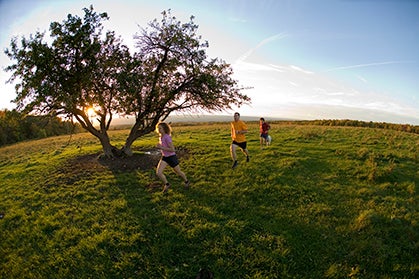 The 800-mile FLT includes a main, white-blazed trail plus a wealth of loops and linear spurs. Parts of the FLT are already certified components of the North Dakota-to-New York North Country Trail, which will eventually be the longest trail within the nation—a whopping 4600 end-to-end miles. The FLT traverses from the Allegheny Mountains in the west to its eastern terminus in the Catskill Forest Preserve, where it meets the Long Path, a 350-mile trail stretching between the Albany area and Fort Lee, New Jersey, that intersects the Appalachian Trail in Harriman State Park. In western New York, the FLT’s Conservation Trail stretches northward to Canada, where it meets the 525-mile Bruce Trail, which follows the Niagara Escarpment through Ontario to Tobermory on Georgian Bay.

As if the FLT isn’t sufficient on its own to invite long or short exploratory runs, every three years comes a ready excuse for locals and visitors to partake of its delights: the aptly named Triennial Finger Lakes Trail Relay. In this event, depending on the decree handed down during the irregular meetings of the organizing committee that invariably take place in the race director’s bathtub, teams of six or seven runners cover roughly 80 miles of the trail between Watkins Glen and Dryden, sampling the dynamic waterfalls, pastoral fields, expansive lake views, environmentally protected bogs, titillating wineries, deep-dark woods with suddenly appearing stone walls and enigmatic gorges for which Ithaca is nicknamed—Ithaca is Gorges.

As administrative habits suggest, the Triennial is not just any relay race. It was concocted in 1981 by the Rossiter brothers, “Dump Truck” and “Spider,” as, says Truck, “a competitive team relay to break local runners out of their ‘another week, another 10K race’ and ‘how many marathons have you done?’ rut.” Over the years the Triennial, which now takes place in late September, has grown in quirkiness while retaining its original objectives. To help Truck, Spider and their still-young-at-heart cronies retain the advantage their legs and lungs once provided them outright, runners are granted age- and gender-based handicaps, and to augment the cross-country scoring system are bonuses based on the number of Triennials run and—if the bathtub water temperature is just right—by demonstrably helping to spread the word. To participate in a Triennial, all team members must first show their mettle. One option is to prerun their respective section of trail at an acceptable pace. Thus, the summer of 2005 found members of the Finger Lakes Runners Club checking out their “stages” of the race, as well as sampling those of their teammates.

On one such summer day, Steve and I continued running past the double blaze marking a transition from the uniformity of the pine plantation to well-defined singletrack with hardwoods above and ferns and moss below. Passing a well-kept lean-to and fire ring constructed to accommodate through-hikers, we plunged to the valley floor, girding ourselves for the grind back up and our remaining dozen miles. The Ice-Age-carved Finger Lakes region features deep north-south cuts, making the trail more than rolling but less than mountainous. Although local farmers might argue otherwise, the terrain has a low proportion of rocks, and offers enough mud, roots and variable footing to guarantee a good adventure run. 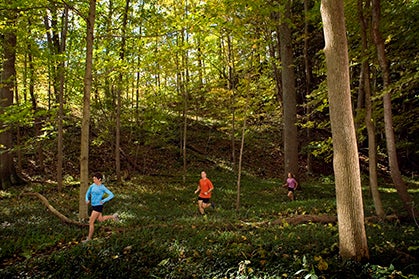 A couple of weeks prior to my run with Steve through the Danby State Forest, I joined several other intrepid runners just a few miles east for a one-way jaunt along the FLT in the Shindagin Hollow State Forest. The run’s leader, Joe Dabes, not only has been part of the Triennial shenanigans from the beginning, but also serves as map maker for the Finger Lakes Trail Conference and trail-section coordinator for over 100 miles of the FLT, including all that the race encompasses. As we ran through stretches of lush woods punctuated with luscious but sometimes-prickly raspberries, Joe filled us in on the trail’s history. The 1930s found the U.S. government buying up private acreage—largely pastureland—and gifting it to New York State to convert to forestland. The FLT zigzags through these forests and a smattering of state parks, and also relies on the goodwill of the more than 450 private landowners who permit the trail to cross their property.

The trail’s stone walls are remnants of borders and cattle restraints that have been engulfed by second-growth woodlands. “I’ve done the Finger Lakes Trail six times,” declared Dabes, “and I’m working on my seventh. I love this trail.” Many a summer day will find Joe with his golden retriever, a chainsaw and pruners tending needy trail sections.

While some prefer to view trail running as a wilderness experience, others appreciate easily accessed road crossings and appealing towns for off-trail good times and eats. The Finger Lakes Trail falls into the latter category, with spurs, loops and additional regional trails permitting convenient point-to-point, loop or out-and-back excursions. And Ithaca, made cosmopolitan by the presence of Cornell University and Ithaca College, provides the perfect hub for exploration of not only the FLT, but also dozens of Finger Lakes wineries, the riches of Ithaca itself and the myriad New York State Parks (some contiguous with the FLT and some reachable via a short spur or modest drive).

Tucked right downtown is the famed Moosewood Restaurant, featuring principally vegetarian fare. The ABC Café is a likeminded eatery just up East Hill in Collegetown, and Joe’s Restaurant offers traditional Italian cuisine. The various branches of Collegetown Bagels–Ithaca Bakery vie with Wegman’s grocery for the best in bagels and deli service, and Gimme! and Juna’s are favorites when it’s time for a coffee fix. New to the scene is the Finger Lakes Running Company, where owner Ian Golden will get you into the right shoe or gear and set you up with FLT maps. In the evening, catch an art film at Cinemapolis or Fall Creek theaters or a live show at the Hangar or Kitchen theaters or on one of the campuses. This musical town has no shortage of nightspots, including the Rongovian Embassy to the USA, nestled in nearby Trumansburg, just a veritable stone’s throw from the Interloken Trail—the FLT spur in the Finger Lakes National Forest, New York’s only national forest—which is home to the Finger Lakes 50s Trail Races (July 4th weekend).

Back on the trail, Steve and I had been rolling along and were in the throes of a hill that during a race is more efficient to walk than run. However, we continued our trot until we found ourselves at Thatcher’s Pinnacles, with an endless view of hills, valleys, streams and ponds. We promised each other to strap on our snowshoes come wintertime and again drink in the expansive vista.

With the next running of the Triennial not until 2008, there is plenty of time to travel to New York’s Finger Lakes and discover for yourself what the region has to offer—and to practice following the white blazes of what might become your stage in an upcoming Triennial. Although the Rossiters’ Team Atrocious always manages to declare itself winner, there are a bevy of coveted accolades bestowed at the post-relay party, such as “Christopher Columbus” (most lost), “Catherine the Great” (outstanding performance), “Timothy Leary” (long strange trip), “Oliver North” (ends justifies the means) or even “Monica Lewinsky” (you’ll have to visit the Triennial website to get the lowdown on this new award! 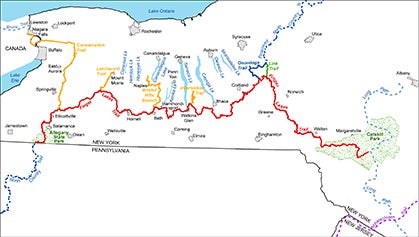 “Centrally isolated” Ithaca is located in the triangle formed by Binghamton, Rochester and Syracuse, New York. Ithaca, which lies at the convergence of NY routes 13, 34, 79, 89, 96, 96B and 366, is also served by daily flights by US Airways and Continental Airlines.

Run the FLT anytime from mid-April through mid-November, then break out your snowshoes for the winter months. During the fall deer-hunting season (mid-November through mid-December), some sections are officially off limits.

Form a team and get ready for the anticipated date of September 28, 2008. Keep an eye on http://home.hetnet.nl/~fatcat/triennial.htm for details.

Tour and taste the bounty of the dozens of award-winning Finger Lakes wineries that dot the region’s lakes (www.winetrailcountry.com). Visit the Corning Museum of Glass (www.cmog.org), which doubles as the finish line of the Wineglass Marathon on the first Sunday of October (www.wineglassmarathon.com). Fill yourself with the local flavor and flavors of Ithaca on weekends at the waterfront Farmers Market (www.ithacamarket.com).