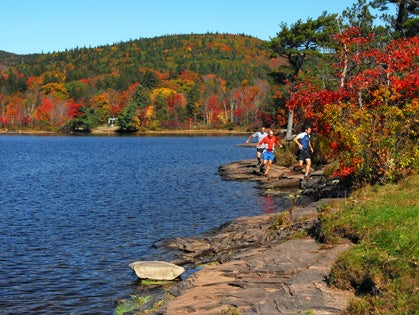 We had hopscotched back and forth over steep hills in the early miles of the Escarpment Trail Race in Windham, New York. While I gapped ultrarunner Elizabeth Carrion going uphill, she subsequently gave a master’s class in descending steep, technical terrain. Careening down one slope, I turned back to take a picture of her, lost my footing and smashed down hard on a boulder. The trails in the Catskill Mountains of southern New York turn from easy to uber-technical in a heartbeat.

That’s part of the enjoyment of running in the underappreciated Catskills. Whether you are looking for an easy cruise or a big day with huge vertical gain, these mountains deliver. The western Catskills offer rolling, seldom-used trails through chest-high brush and tall oak trees. Fifty miles east, the Devil’s Path takes you up steep cliffs and through tangled pines that can be dense enough to blot out sunlight. The Escarpment Trail, tracing the northernmost edge of the mountains, treads through first-growth forest atop Windham High Peak, with dramatic views to the north, before slabbing down open ledges to its eastern terminus at North Lake.

Located just 100 miles north of New York City, the Catskills are a runner’s playground. If you are traveling to New York on business and can steal a day to run, the Catskills are an easy two-hour drive. For someone wishing to spend a week in the mountains, multiple trailheads invite you to explore.

Indeed, traversing Catskills trails, you will encounter everything from birch trees in grassy meadows to dense pine groves reminiscent of The Hobbit’s Mirkwood Forest. The trails range from easy ridge runs to steep and technical slogs.

The Catskills are not actually mountains: they are the northernmost extension of the Allegheny Plateau, which ranges west and south into Pennsylvania, Ohio and West Virginia. Leftover after the last Ice Age, this area is eroded and laced with deep narrow valleys called cloves. Some people call them “mountains with only one side”—the dramatic eastern escarpment, what the Native Americans called the Great Wall of Manitou, falls away gently to the west.

Driving to a typical trailhead, you will meander on roads through narrowing valleys until you arrive at a turnout that accommodates no more than five cars. Even on a holiday weekend, you might encounter only a half dozen hikers instead of the dozens you could meet farther north.

“If you’re looking for solitude, you’re going to find it in the Catskills,” says local resident and veteran trail runner Tom deHaan. “The trails are never crowded. People tend to drive past the Catskills to the Adirondacks or Vermont.”

While any of the Catskills trails dish out beautiful scenery, there are four runs ranging from nine to 19 miles that give a newcomer a great introduction. Read on.

The Slide-Cornell-Wittenberg loop is one classic route, snaking 15 miles over three peaks, including 4100-foot Slide Mountain, the highest in the Catskills. Park at the Woodland Valley Campground (fee required) on Woodland Valley Road near Phoenicia. Set out on Phoenicia-East Branch Trail, running counterclockwise.

“In this direction almost all of the uphills on the route are runable,” says deHaan.

The trail follows a stony 19th-century tote road to County Road 47. A two-mile road run takes you back into the woods for a steady climb up Slide. On a clear day, you can gaze across the Hudson River to the Berkshires of Massachusetts from Slide’s summit.

Descending towards Cornell Mountain, you will find a reliable water source on a spur trail just below the summit before the trail drops 930 feet in a mile into a gap, where you’ll climb over the Cornell-Wittenberg ridge. From Wittenberg, it’s easy running on a gradual descent through hemlocks back to your car.

The 25-mile-long Devil’s Path got its name from early settlers’ superstitions. The native people hunted in the Catskills, but primarily lived outside the escarpment. The English and Dutch who settled the lower Hudson Valley also lived outside the mountains, intimidated by the dense hemlock forests and deep valleys. “He” is all over: the Devil’s Acre, the Devil’s Tombstone, the Devil’s Kitchen.

Although rocky terrain and several extreme climbs make a point-to-point run on the Devil’s Path challenging, multiple trailheads allow you to sample it in chunks.

A beautiful eight-mile loop starts from the Roaring Kill trailhead off Platte Clove road. The grades are easy as you climb Mink Hollow Trail to an intersection. Turning east on to the Devil’s Path, scramble up boulders and rock ledges to the summit ridge of Sugarloaf Mountain.

The ridge offers several views of Plateau Mountain and other Catskills peaks. Descending the ridge, pick up Pecoy Notch Trail to return to your car. Pass a large beaver pond with an elaborate dam that is covered with jewelweed in summer. Half a mile further is the remains of Dibble’s Quarry, one of the run’s highlights. Here, local people painstakingly created a series of outdoor parapets, terraces and giant chairs with pieces of slate from the quarry. 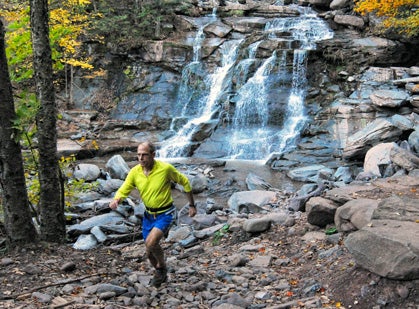 Peter Minde at the base of Kaaterskill Falls. Photo by F-Stop Fitzgerald.

This 19-mile lollipop-shaped loop goes over some of the greatest country in the Catskills. Escarpment Trail runs along the Great Wall of Manitou, the mighty escarpment that rises steeply from the Hudson River Valley. It’s a microcosm of the whole area, with nearly 19 miles of singletrack. Birch and oak forest turn to pine and hemlock to birch and back to pine as you ascend the steep trails with hairy descents.

Start from Route 23 in Windham. The “mountains with one side” aphorism is etched in relief as you run easily up Windham High Peak and descend steep ledges on the east side of the summit ridge.

From Windham’s summit all the way to the top of Blackhead, several lookouts afford 50-mile views. On Blackhead, run west, then turn down Black Dome Trail to return to the Escarpment Trail. You will run back over Windham and down to your car.

Park at the Becker Hollow trailhead on Route 214 for this 14-mile loop. Once past an old dam, Becker Hollow gains 2200 feet in two miles to Hunter’s summit plateau. The old fire tower here gives 360-degree views of the surrounding mountains.

From the summit, the direction you take depends on your preferences. If you enjoy the challenge of descending technical, rocky terrain and less technical ascents, take Hunter Mountain Trail and descend to Spruceton Road via Devil’s Path. Whatever the early settlers’ superstitions, the name has a different meaning here as you rock hop gradually downhill. Return to Hunter via the easier Spruceton Trail before descending Becker Hollow. If that’s not enough, a spur trail leading to the Colonel’s Chair overlook at the Hunter Mountain ski area adds two miles.

Accommodations. Several area towns offer great lodging options and restaurants. Tannersville is perfect for exploring the northern Catskills, including the Blackhead Range and Escarpment Trail. Driving into Phoenicia from Route 28, you might feel like you have stepped back in time. Many of the buildings date back to when Phoenicia was originally built.

For a break from running, Phoenicia outfitters offer tubing down the Esopus River. Iconic Woodstock lives partly off a music festival that was actually 10 miles away. After a day’s run, the people-watching is great on the main drag. Woodstock is close to Mink Hollow, Overlook Mountain and only a short drive from the eastern terminus of the Devil’s Path.

Seasons. From Memorial Day weekend to mid-October is the best time to visit. After the first frost, you will need an ice axe and, at the least, running shoes with spikes or hiking boots with crampons and/or snowshoes. Trails may begin to accumulate ice as early as late October.

When planning your trip, pack a water filter or purification tablets but be sure to also bring plenty of water. With few exceptions, the Catskills are dry mountains. Streams that run fast in June can be dry by mid-July. Some water sources shown on the New York-New Jersey Trail Conference Maps are unreliable in dry weather.

Resources. The New York-New Jersey Trail Conference has excellent trail maps, available online at www.nynjtc.org, as well as guidebooks. For lodging options, ranging from motels to B & Bs to campgrounds, go to: www.phoeniciatimes.com/e28/lodging.html, www.greenetourism.com and www.woodstockchamber.com/woodstock-new-york-ny-lodging-2.html.

Pegasus Shoes in Woodstock is a general-purpose footwear store that offers some running shoes. Fleet Feet in Albany, New York, 65 miles north of the Catskills, or Rock and Snow and Catskill Mountain Multisport, both located in New Paltz, New York, south of the mountains, also offer trail shoes.