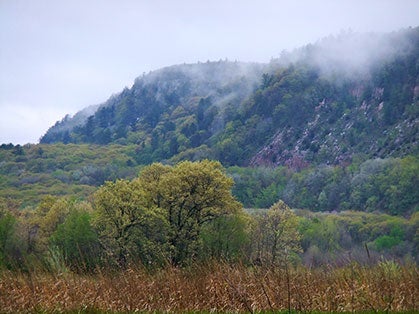 Some 25,000 years ago, a glacier flowed into what is now Wisconsin and covered most of the state until melting back over 10,000 years later. It left behind a series of geological features unique to glaciation that are more prominent in Wisconsin than anywhere in the world: features like dells, outwash plains, kettles, moraines, eskers, erratics, drumlins and kames. In fact, the final stage of glaciation in the last ice age—which lasted from 2.5 million years ago until 10,000 years ago—is known as the “Wisconsin Glaciation.”

“Much of the trail offers solitude, but occasionally it takes you right down the main streets of charming Wisconsin communities,” says Matt Kaufmann of the IATA. “If you’re a trail runner, walker, hiker, backpacker, snowshoer or cross-country skier, the Ice Age Trail is the perfect place to explore and connect with Wisconsin’s wonderful landscape, culture and world-renowned Ice-Age history.”

Most of the trail is not particularly hilly, but what it lacks in vertical gain or loss it more than makes up for with smooth, runable singletrack and lush (or snow-covered or fall-colored, depending on the season) ridgeline views.

The trail is not connected from end to end and there are several interruptions, but numerous long, uninterrupted sections are easily accessible from every part of Wisconsin.

Highlights of the Ice Age Trail

Straight Lake State Park. Located in Polk County just an hour and a half from the Minnesota’s Twin Cities, this section, says Kaufmann, is “the Midwest’s answer to Saint Mary Lake [in Glacier National Park, Montana].” The landscape in this 3000-acre park is rich with outcroppings of basalt bedrock, which, being near the surface of the ground, has given spring to several ephemeral ponds, perched wetlands and marshes.

Chippewa Moraine. Located one hour from the city of Eau Claire, this section of the trail hosts the Chippewa 50K and 10K Trail Races in April. Start from the David R. Obey Interpretive Center for easy access to a section that winds through a spatter of seemingly endless kettle lakes.

Plover River State Fishery Area.Explore the hardwood forest and cedar trees along a Class I trout stream, or wander past moss-covered boulders in the space beneath a forest canopy of fir, cedar, hemlock and aspen trees. Located in Marathon County, 30 minutes from Wasau. Bonus tip: visit the Great Dane Pub and Brewing Company in Wasau to quench your thirst and hunger post-run.

South Central Wisconsin and Devil’s Lake State Park.This region of the state, including Devil’s Lake, is the place to find spectacular vistas on the Ice Age Trail. 360-degree views of the Baraboo Hills and the sights from the top of the east and west bluffs that contain the trail are equally impressive. Start out west of Highway 113, about 45 minutes from Madison. Bonus tip: while use of the trail is free, access to state parks requires a vehicle admissions sticker.

Table Bluff. Located near Madison, this route traverses restored oak savanna and prairie where melting glacial waters once poured through the valley floor. Bonus tip: stop at Crossroads Coffee House in Cross Plains for a vegetarian wrap and iced tea.

Races on the Ice Age Trail

The Ice Age Trail hosts several races each year, ranging from small and informal to large and highly competitive (see our coverage of the 2012 Kettle Moraine and Ice Age races here). Some of the options include: