Twisters, Trails and the Ultra Serpent 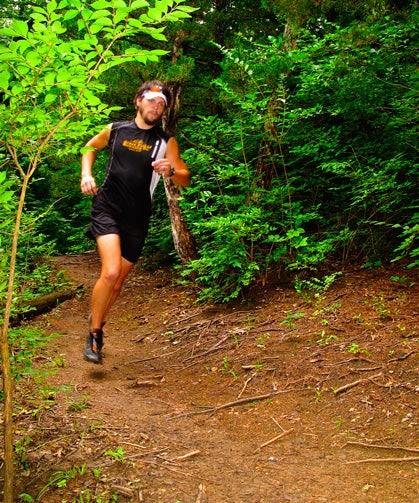 Dave Wakefield runs the MacLennan Park Trails near the Cedar Crest Governor’s Mansion in nearby Topeka. Photo by Tom Stubbs.

Go if … you crave diverse trails, music and beer. Lawrence, Kansas, is home to the University of Kansas Jayhawks, nine music venues (plus numerous free outdoor concerts all summer long), a sophisticated arts scene (boasting 30 galleries and museums) and many miles of densely wooded singletrack. Located just 41 miles west of Kansas City, Missouri, Lawrence is a bike-friendly town situated on the banks of the Kansas and Wakarusa Rivers.

After hitting the trails, head over to Massachusetts Avenue (“Mass”) and explore the city’s many galleries and vibrant music scene. “Bad” Ben Holmes, co-founder of the Kansas City Trail Nerds running club, says that the area isn’t just “tornado fodder, ” but an active community and area rich in trail-running opportunities. When visiting, join the Trail Nerds group trail runs (including ultramarathon-training instruction) held almost every day of the week, year round.

Best Trails One of the area’s most popular trails is the Clinton Lake Trail, part of the North Shore Trail system. Beginning in Overlook Park and containing over 25 miles of twisting, forested singletrack and great climbs, this system is host to three races and home to the “ultra serpent.” This mythological creature, often mentioned by members of the Trail Nerds, is blamed for the strange sounds and mirages that haunt delirious runners in the late stages of an ultramarathon or a nighttime training run.

The smooth, rolling, nine-mile Sandrats Trail (also known as the River Trails) is located across the Kaw River north of downtown Lawrence. “It’s a great place to go on a recovery or fast tempo run,” says Holmes.

Perry Lakes Trails, 30 minutes west of Lawrence, consists of over 50 miles of technical singletrack that travel through high prairies and dense forest. “Of all the trails around here, Perry Lakes is most honest to the natural terrain, meaning it has lots of rocks and roots,” says Great Plains Running Company owner Willie Lambert. Perry Lakes is home to the Rock Creek Trail Series (trailrunning.greatplainsrunning.com), comprised of a 10K and 5K in March, half marathon in May, a July night race and a fall 50K.

Race April’s Vasque Free State Trail Run 100K, 40-miler and marathon (psychowyco.com) is held on the North Shore’s Clinton Lake Trail. One of the region’s bigger ultra events (capped at 200 participants), this race is multiple loops and may include weather from lightening to floods, high winds and heavy rain. By contrast, the Sandrat Trail Run (psychowyco.com) is a low-key October race on nine sandy miles along the Kansas River. Do well and earn a coveted rat trophy (little rat figurines attached to a mousetrap). The annual Brew to Brew Run (brewtobrew.com) held in April is a 44-mile solo or relay race from the Boulevard Brewery in Kansas City, Missouri, to the Free State Brewing Company in Lawrence. Enjoy the beer before, after or during the run.

> Go when The trails are typically runable year round, with September and October being be the driest, coolest and least bug-infested months.

> Refuel Don’t miss Gates Bar-B-Q (gatesbbq.com). With the fast-paced ordering system, you better know what you want before getting to the front of the line, which isn’t easy considering the plethora of choices. “It’s delicious, but they’re like the Spanish Inquisition in there,” says Holmes.

Another sure bet is the Free State Brewing Co. (freestatebrewing.com) in the heart of the city. While the Copperhead Pale Ale is the default favorite, try the Old Backus Barleywine if you desire a little more kick after a good trail run.

> Pitstop Great Plains Running Company (greatplainsrunning.com) is the city’s authority on running-shoe fitting and where to find the best trails. Store owner Willie Lambert is committed to putting Lawrence on the map as a trail-running destination. “The running scene here may still be in its infancy, but we’ve got the trails,” he says.

> Resources The Lawrence Convention and Visitors Bureau (visitlawrence.com) has information on attractions, restaurants and entertainment, and Kansas City Trail Nerds website (psychowyco.com) has maps and directions to various trails in and around Lawrence.

Train Smarter In The Heat