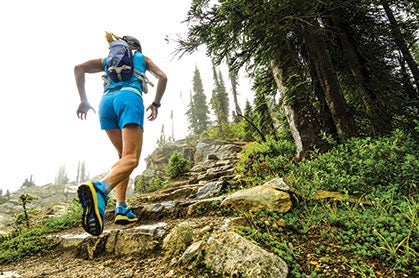 Trail Runner magazine hereby nominates this wee, Canadian Rockies town for the coolest trail-town name, ever. Read on so you, too, can revel in and feel the stoke.

Revelstoke began its life in the 1860s as a gold-mining village called Farwell, named after the fellow who surveyed and laid out the original town site. In 1885, the Canadian Pacific Railway placed a track through town, which was incorporated 14 years later with a new name, Revelstoke, after the man whose banking firm largely funded the railway.

Revelstoke today is best known among athlete communities as an absolutely absurd backcountry-ski destination. A number of heli- and snowcat-skiing companies, as well as backcountry lodges, provide the infrastructure support for the sport. And, in the winter of 2007 and 2008, Revelstoke Mountain Resort, a front country ski resort, opened in town.

But Revelstoke makes a stoke-worthy summer destination, too, because it has two national parks in close proximity. “Mount Revelstoke National Park is to the northeast,” says Chloë Lanthier, a 46-year- old Revelstoke resident, trail runner, Patagonia Ambassador and owner/director of the X-Training School. “And Glacier National Park is just east.” In addition, a number of provincial parks comprise the rest of the wild spaces beyond town.

On the town’s vibe, says Lanthier, “We have a very earthy feel, a relaxed environment surrounded by mountains and the Columbia River. We have very few tourists, so this feels like my home, my environment. And we have such easy access to the mountains and trails that this town really is just a part of the wilderness.”

> GET THERE / The Kelowna International Airport is a 2.5-hour drive southwest of Revelstoke, and the Kamloops airport is 2.5 hours west. Rent a car from either airport and make the drive to town. Or, if you’re on a major Canadian road trip, Revelstoke is on the famous Trans-Canada Highway.

> BE A TOURIST / Dine at La Baguette, says Lanthier. “This is my favorite place to eat, with amazing wraps, salads, an unbelievable selection of gelato, thin-crust pizza, made- in-house pasta and many gluten-free options.” The Revelstoke area is also home to a number of hot springs of various sizes and development, so bring your swimsuit.

> TAKE NOTE / Uh, we’re talking about the Canadian Rockies here. Revelstoke embraces winter sports from the first major snowstorm in November until the trails begin to melt out in April. Also, this is prime grizzly- bear country, so run with bear spray, at least one other person and the knowledge of how to safely travel in the backcountry.

400 Miles the town is to the northeast of Vancouver. It lies 255 miles west of Calgary, near the western edge of the Canadian Rockies.

1570 Elevation in feet of downtown Revelstoke, even though mountains tower over it and its high-ish latitude guarantees a super-snowy winter climate. 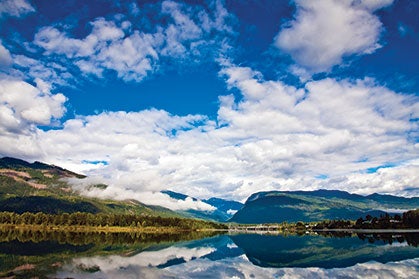 > If you can believe it, not a single trail race takes place in or within a couple hours of Revelstoke. Go revel in some self-prescribed adventures instead!

> MOUNT REVELSTOKE SUMMIT TRAIL / The 6360-foot mountain is perched just northeast of Revelstoke. “I begin this run in town and, in minutes, I am alone, in the middle of nowhere,” says Lanthier. “At the top of the mountain, trees break to alpine singletrack and wildflowers.” begin  at the tournament of champions plaza and run about a mile up the Mount Revelstoke trail to the Nels Nelson Historic area. Have a looksee at the former ski-jumping site, and then jump on the summit trail, which climbs a little more than six miles uphill.

Hop on the last little pitch to the top on the upper summit trail before returning the way you came. You’ll net just shy of five grand in climb out of this 16-mile outing.

> REVELSTOKE GREENBELT / access this trail system from centennial park, south of downtown. There are paved and unpaved options, but grab the singletrack and run out-and-back along the narrow, winding, root-y and flat trails along the Columbia river. says Lanthier, “The wet- lands are protected and it’s an amazing refuge for birds. You’ll also see locals out running and riding bikes.”