The feeling was instantaneous, an epiphanic jolt so profound that it nearly stopped me dead in my tracks … 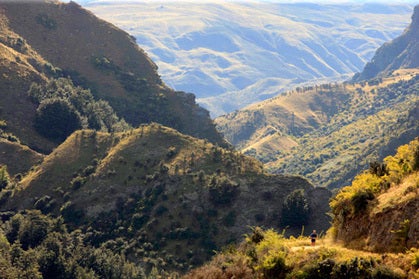 The feeling was instantaneous, an epiphanic jolt so profound that it nearly stopped me dead in my tracks on a technical doubletrack trail towering over New Zealand’s South Island adventure capital, Queenstown. In that prolonged moment, I appreciated how incredibly fortunate I was to be engaged in my favorite pastime—trail running—in such a fantastic place.

The 360-degree panoramic views atop Queenstown Hill’s tree-barren environs are more like a jocular siren to a descending trail runner. The rocky, rutted trail drops at a precipitous rate and is no place for a wandering eye. Still, I cannot help it.

At the foot of Queenstown, Lake Wakatipu reflects a soft blue color, mirroring the clear sky enveloping me. Layered in between, the valley’s dark-green flora creeps upward until swallowed by each mountain’s rocky, brown-gray edifice. I resolve to spend any remaining free time in Queenstown trail running, and manage to float the final miles of the 1500-foot descent, exuberant in my epiphany.

A fortuitous junction of work and pleasure is what delivered me to Queenstown. My career work as an insurance broker occasionally offers trip rewards with insurance carrier partners, and “work” in Queenstown consisted of river jet-boat rides, guided safari tours, sailing, bungee jumping and full-course meals with heavy portions of socializing. Before and sometimes after “work” each day, I voraciously ran trails.

Queenstown’s restaurants, stores, coffee shops, hotels and public transportation are all easily reached by foot. Lake Wakatipu and the immediate surrounding walls of mountains act as natural town borders and create an dearth of buildable land. This occurrence gives Queenstown part of its charm, a small footprint. Nor is any building structure or home taller than a few stories, reducing the eye’s competition when gazing up towards the mountains, visual in every direction. Trailheads dot the town’s periphery, making for convenient access to steep singletrack, which disappears quickly into the mountains.

Shaped like a 50-mile-long lightning bolt, Lake Wakatipu is a focal point of Queenstown (pop. 28,000), which lies 1200 feet above sea level, and New Zealand’s longest lake (and the country’s third largest). Its glacier-fed water is crystal clear, filled with large trout and along Lake Wakatipu’s shores is the only place you will find flat trails.

Queenstown Gardens, for example, is an excellent locale for a flat recovery run as well as an enjoyable picnic. Occasionally, a sailboat might pass by. Queenstown Gardens’ fine graveled doubletrack trails transition to the Frankton Arm Walkway on its eastern border and eventually connect with the adjacent town of Franktown. On the west side of Queenstown Gardens, a rolling singletrack heads through native bush toward Sunshine Bay’s jetty. As if the fragrance of eucalyptus trees wasn’t enough, runners are also rewarded with unobstructed views of the lake and the exceedingly steep, craggy Remarkables mountain range.

Steep trails define the area, though. Popular quick hits include Queenstown Hill, a seven-plus-mile out-and-back trail with 1500 feet of climbing, and Ti Ki Trail on the north end of town, which features similar vertical gain but at a much steeper grade. The climb offers several options of hiking and mountain-biking trails zigzagging their way up the mountain beneath the Skyline Gondola (reputed to be the steepest gondola lift in the Southern Hemisphere).

From atop Skyline, the trails continue upward, becoming even more technical and remote; favorites include Fernhill Loop and Ben Lamond and Moonlight tracks (New Zealanders often refer to trails as tracks). To reach the summit of Ben Lamond runners must ascend another 3200 feet in three miles.

“We are spoiled. There are so many fantastic trails,” says 32-year-old, Kiwi (a commonly used term to describe New Zealander’s) trail runner Evan McWhirter. “That’s what makes New Zealand such a great place to visit for a trail-running enthusiast.”

McWhirter knows. He has lived in Queenstown since he was eight years old and has run trails for as long as he can remember. “For those living in Queenstown, outdoor sports are second nature,” he says. “Mountain running, mountain biking, skiing and boarding .. Bear-Grylls-type survival skills are a part of our school curriculum.”

McWhirter half jokes about such survival skills but says they one day may save a life. Remote areas with potentially dangerous weather conditions are just a few miles from town. “We don’t have many people in the South Island. We have tracks,” says McWhirter. “And if it seems like there is no one else out there, it’s because there isn’t.”

In part because it is the birth home of bungee jumping, Queenstown has earned the moniker “Adventure Capital of the World.” Fortunately for trail runners Queenstown is also known not only for its close-in trails but also for its more remote backcountry trails.

The Routeburn Track, a 20-mile point-to-point singletrack, for example, was ranked as one of the top 11 trails in the world, by National Geographic Adventure magazine, and parts of the Lord of the Rings trilogy were filmed nearby. The Routeburn Track is also one of New Zealand’s nine “Great Walks,” as defined by New Zealand’s Department of Conservation. Other Great Walks near Queenstown include the Milford and the Kepler tracks. These tracks are well maintained and offer unparalleled views, from ridgelines to coastlines, from native bush to glaciers.

Evan refers to his life as The Queenstown Dream: “It’s a simple philosophy. It means to be free. Free to choose, free to do what it is you enjoy and free from crowds and pollution. It is quality of life, personal happiness, satisfaction and health above all else.”

Neal Gorman is an avid trail and ultramarathon runner. He lives and trains in Washington D.C. and the nearby Shenandoah mountains.

The Kepler, December 3, 37 miles. Steep and technical trail race over another one of New Zealand’s famous nine “Great Walks,” The Kepler Track. www.keplerchallenge.co.nz

Getting There. Flights from Los Angeles to New Zealand’s main airport hub and largest city, Auckland, on the country’s north island, last 12 to 14 hours. The flight from Auckland to Queenstown takes approximately 90 minutes. Plan for a day and a half for travel.

Trail Maps. Outside Sports on Shotover Street in central Queenstown offers a wide selection of quality outdoor gear. Upstairs in the same building is Queenstown’s branch office of New Zealand’s Department of Conservation (DOC), which can provide invaluable information and maps on regional trails.

Gear. Queenstown’s only running shoe store, Frontrunner, is located at the corner of Beech and Cow Lane. The staff is friendly but shoes are almost double the cost of U.S. retail shops’.

Local Transportation. Queenstown offers numerous car-rental options and shuttle-bus services. Unfortunately, during the heavy summer (December through March) and winter (June through September) tourist seasons, car rentals quickly sell out. Make a reservation in advance. Economical shuttle buses are available from central Queenstown, and travel to many popular outdoor destinations. Lastly, Connecta Bus is Queenstown’s answer to public transportation and connects the town to all adjacent towns and the Queenstown Airport.

Food. Winnie’s, in the heart of Queenstown, sells large custom pizza pies covered in generous toppings, with chewy crust. The domestic beers on tap include the excellent lagers Speight’s, Steinlager and Monteith, to name a few. Locals go gaga over Ferburgers big burgers and atmosphere. Queenstown tourists and locals flock to Patagonia Chocolates for a wide array of mouth-watering sweets, ice cream and coffee drinks; it is also one of the few locations in Queenstown offering free Wi-Fi so you can email sweet trail-running pictures with a mouth full of gelato. New Zealand is famous for its seafood and Wai is known for its diverse selection and quality. Queenstown is located in New Zealand’s Central Otago region, which is known for its wine production, pinot noir, in particular.