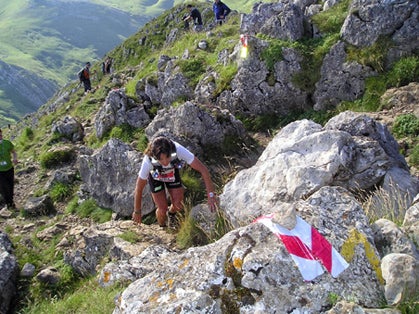 With 36,000 feet of ascent, a new ultra trail race in northern Spain’s Basque Country—the Ehunmilak (pronounced Ee-oon-mee-yak, Basque for “100 Mile”)—demands more climbing than Colorado’s Hardrock 100, one of the most challenging mountain 100-milers in the world. And, according to runners who have completed both the Ehunmilak and France’s grueling Ultra-Trail du Mont-Blanc (UTMB), the Ehunmilak is tougher.

Like UTMB, the race starts at 6 p.m., forcing runners to head into darkness. However, what makes the Ehunmilak so difficult is that its climbs and descents have virtually no quad-saving switchbacks. Instead, they are exhausting—straight up and down, sometimes off trail. In both the 2010 inaugural event and the 2011 race, more than 50 percent of the field dropped, including me during the latter. Last year’s winners and new course-record holders Javi Dominguez of the Basque city Vitoria, and Nerea Martinez of Pamplona, Spain, crossed the line in 24:49 and 28:00 respectively.

A Unique People of Mysterious Origin
Generally, Basques prefer to be identified autonomously, separate from Spain, under their own flag and in their own ancient tongue, euskara. They are thought to have Celtic roots, but their origin remains a mystery, and euskara (a language of mostly k’s, x’s and z’s), has no known ties to Indo-European languages (you will get by with Spanish).

The Basques are a hard-working, sophisticated, vital people, and they love to compete, be it cycling, handball, jai-alai (which they invented), whaleboat rowing, scything, cart-lifting, soccer in an arena with a bull (for real) or ultrarunning.

A Race of Extremes
Ehunmilak runners pour forth from the start in Beasain town plaza and funnel through the cobbled streets, flanked by over 1000 spectators. The well-marked course then loops clockwise through the mountains of Gipuzkoa province, climbing to a high point around 4500 feet, linking farming valleys to historic towns.

Throughout the first night, hundreds of locals taking a vino tinto (red wine) or a coffee, jump to their feet, and cheer from the barricades as runners charge through Azpeitia—one of five small cities on the course—much like the Running of the Bulls. Until dawn, you will hear the constant cries, “Oupa!” and “Animo!” (“Go!”) Daylight brings cathedral bells and cowbells, white chapels and giant crosses on green slopes.

Aid stations offer homemade salami and cheese—you know you’re in the Old World. The course even includes a canopied, mossy section of El Camino de Santiago, a pilgrimage route that has traversed northern Spain since the ninth century.
For the record: the rain in Spain does not fall mainly on the plain. The Basque Country enjoys a climate more akin to Scotland than to the dry meseta to its south. A delicate misting, known locally as siri-miri, pervades. This is Green Spain, and the weather can be unpredictable: In 2010 a snowstorm midway through the race forced officials to pull many runners from the course after they almost walked off of cliffs on the wrong side of Txindoki, an iconic mountain of the Sierra de Aralar range that you summit around mile 60. 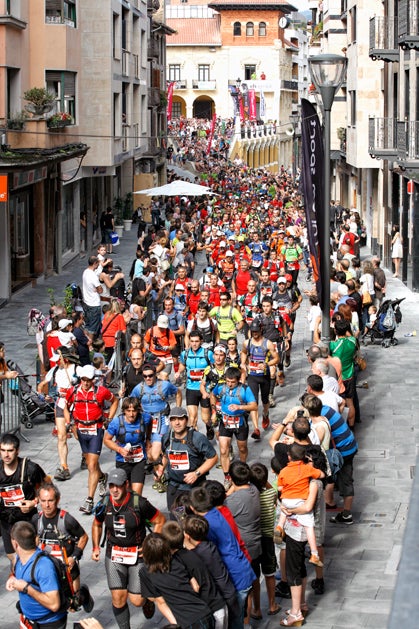 In 2010, first-place finisher Imanol Aleson of Azkoitia in the Basque Country, recalls persevering through the whiteout with another runner. “We were incapable of saying a word because of the cold … We were frozen.” Last year, the race began in clear, hot conditions and ended in rain.

I quit at mile 70, after tweaking an ankle when my foot got lodged between two limestone fins. American Ricky Denesik, a veteran ultra trail runner who also attempted the Ehunmilak, says, “The footing was the hardest thing.”

Even with my DNF, I have fond memories of the experience: the pre-race pasta dinner in a 15th-century mill with wine on tap; a silent spectator holding the reins of a thick-necked white Andalusian horse; the full moon from up high, lighting the surrounding peaks like volcanic islands in an ocean of white mist that veiled the valleys below.

It is a first-class event manned by 1500 volunteers with a deep appreciation for the mental and physical rigor it takes to go the distance. If you finish, someone will fire a popgun over your head and shower you with confetti.

Important Race Details.To qualify for the Ehunmilak, you simply have to be over 18. Pacers and crews are not allowed and runners can access only two drop bags during the race. Coinciding with the Ehunmilak is the 50-mile Goierriko 2 Haundiak (G2h), which is equally as difficult, just shorter. Both races are qualifiers for UTMB and attract some of Europe’s top runners.

Nearly every competitor uses trekking poles, and the race requires that runners carry a backpack full of safety equipment: cell phone, extra batteries, whistle, emergency blanket, etc. Officials randomly search your mochilla at aid stations to ensure you are carrying these items, and may request a drug test after the race. The Ehunmilak is a professional, televised event supported by major sponsors and offers 1000 euros each to the first-place male and female (www.ehunmilak.com).

Getting there. Fly to Bilbao (80 kilometers from Beasain). There is no direct transportation to the race start: rent a car or take a bus. Buses leave hourly from the airport for San Sebastian (70 minutes); take another bus from San Sebastian to Beasain (less than an hour).

Non-running activities. Tour the modern-art Guggenheim Museum in Bilbao (www.guggenheim.org/bilbao) or the Old Town; take a paseo through hip San Sebastian, listen to jazz during the July festival (www.heinekenjazzaldia.com), or rent a board and surf Zurriola Beach; catch a stage of the Tour de France cycling race in the Pyrenees or watch it in a Basque bar while sipping txakoli, a local sparkling white wine. 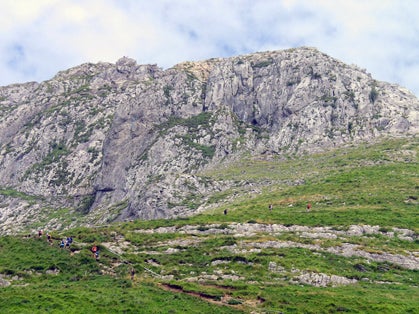 Hike the coast-to-coast GR11 Trail of Gipuzkoa, traversing the western Pyrenees, 180K. From the beech-fir forests of Irati to the Penas de Haya mountains, this is a scenic and challenging tour (www.spain.info).

Hike or run the steepest mountains in Spain, Picos de Europa in the Aragon Pyrenees. From Fuente De, skip the cable car and climb 3500 feet in nine miles for a rewarding view. Or, run the Cares Gorges, 13 miles round trip; the trail is carved in sheer cliffs and follows the Rio Cares.