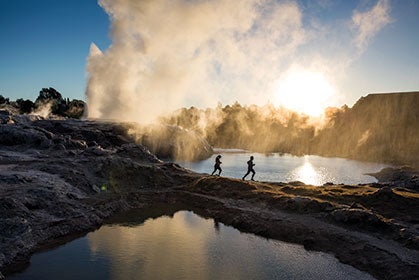 “I wanted it to be a race that people would travel to from all over the world,” says Charteris. At the same time, he envisioned an event rooted in the local culture and community. Members of indigenous Maori tribes perform traditional dances to welcome visitors, and Charteris consults tribal elders and other locals as he plans each race. Says Charteris, “The true soul of this race is the ‘tangata whenua’—the people of the land.”

The race starts in a redwood forest next to Rotorua, a popular tourist destination with many “adventure parks” and a thriving mountain-biking scene, and follows soft, damp trails over rolling lakeside hills. The slippery singletrack is enveloped in dense, fecund foliage as magical as the forests in the Lord of the Rings movies (which, of course, were filmed in New Zealand). The final third of the 100K mostly follows dirt roads, making for a fast finish.

From fewer than 70 runners in its inaugural run, Tarawera has grown to a capped field of 1,000 and attracts an internationally competitive field each year. “[Tarawera] is arguably the premier event on the New Zealand trail calendar,” says Tim Day, a fellow Rotorua runner who took over the race-directing duties in 2014.

Held the first weekend in February (late summer in the Southern Hemisphere), the Tarawera Ultra has also spun off a shorter companion event, the Tarawera Trail Marathon and 50K, in mid-November. 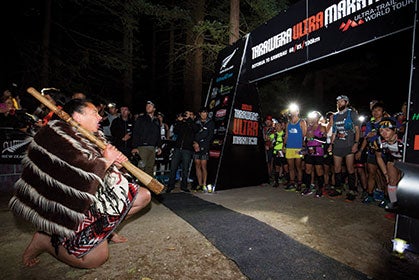 BY THE NUMBERS
Tarawera Ultra

4
number of lakes on the course

1886
the year Mount Tarawera last erupted, shaping the landscape of the course

350
approximate number of runners who travel from overseas each year

3,000
the number of “Heather Bars,” homemade nut-and-grain snacks named after a Tarawera runner and volunteer, distributed at aid stations during the race

Getting there
Fly to Auckland, rent a car and drive three hours south to Rotorua.

Accommodations
The Rotorua Holiday Inn, which hosts the race expo, is located in an area with numerous affordable motels. For apartment-style lakeside lodging away from the touristy part of town, try Cedarwood Lakeside (cedarwood.co.nz).

Post-race grub
Tutanekai Street, in downtown Rotorua, is known as “Eat Street” for its row of local eateries that offer outdoor dining.