Explore the mountains outside of Chiang Mai and beyond 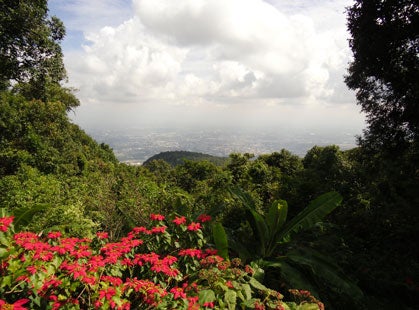 View from the top of Doi Suthep, overlooking Chiang Mai

Wing. In English, the word wing is something that enables flight. It gives the ability to float effortlessly above the world, soar over logs, rocks and streams. In Thai, wing simply means “to run.”

I began my running explorations of Thailand in the foothills outside of Chiang Mai. While most tourists stay at the beaches in Phuket and Pattaya in the south, the mountainous north around Chiang Mai is deserving of a visit. Influenced by the Hill Tribes, the town is filled with creamy curries served on street corners, and local artisans selling hand-stitched clothing and crafts each week at the Sunday Market. A quality meal is easy to come by.

Get your bearings with a free map from a hostel, hop in a red Songteuw (a truck with seats in the back) and pay 20 to 50 baht (roughly $.80 to $1.30) to go anywhere in the city. Though many Thai nationals will know some English, it is helpful to know a few key Thai phrases, such as numbers and simple greetings. 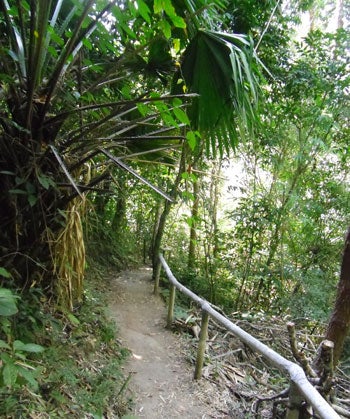 Just 15 kilometers outside of town, Doi Suthep National Park possesses some virtually untraveled trails. The entrance fee of 100 baht is a bit more for a farang—a foreigner—than for local Thai people, but it is still cheap compared to America’s parks. You may have to hop behind the Doi Suthep temple and over a few bushes to find the trails up the mountain, but the climb and views are worth the effort.

You won’t find many runners on the trails, which serve as connectors for the Hill Tribe people to get to and from town, find mushrooms and meditate somewhere cool during the heat of the day. More than likely, though, you won’t see another soul.

The 1676-meter ascent to Doi Suthep is full of lush greenery, birds swooping and monkeys howling in the distance. It will take half a day at a good clip to reach the top. Don’t expect nicely groomed switchbacks; the trail was designed for its users to reach the top as quickly as possible, so the ascent is steep and swift, with plenty of roots, rocks and fallen logs to navigate. If you reach the summit on a clear day, it affords an amazing view of the hustle and bustle of Chiang Mai below—the moat and Tai Pae Gate that separates the old district from the new, the intertwining streets weaving through the city.

In spending time with trail runners in both America and Thailand, I have found two common threads: we love a good beer and we love a hot cup of coffee. While Thailand’s go-to lager, Chang, doesn’t quite live up to the standards of the Oregon IPAs I’m used to enjoying post-run at home, the coffee plantation I discovered while roaming the ridges of Doi Suthep more than compensated for the lack of hops in my diet. Sipping a cup of coffee brewed fresh by a small Thai woman at the summit is the perfect way to savor the cool air and calm quiet. 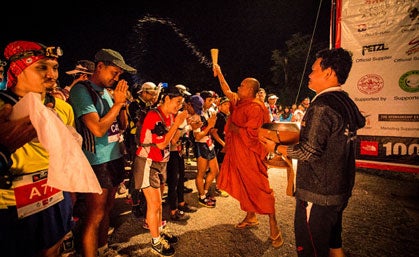 Photo courtesy of The North Face.

Katherine Welch, an expat doctor from the United States who lives in Chiang Mai, two-time female champion of The North Face 100K race, heads up a casual ultrarunning group that trains together in Chiang Mai most weekends. They communicate via Facebook (Chiang Mai Ultrarunner’s Group) and support one another in their various running goals. It’s a casual and diverse bunch of mostly farang who welcome any newcomers and travelers in the area.

In February, I met Welch and many others in the local trail-running community when I ventured to Khao Yai to race The North Face 50K. Two hundred kilometers north of Bangkok and nearly 800 kilometers south of Chiang Mai, Khao Yai translates to “big mountain.”

I spoke with a fellow racer who had spent the week prior exploring nearby mountains and trails. He related stories of jungles, monkeys roaming free, vines and plant life he had never seen before—including a herd of elephants. “I’d never been so awestruck and terrified in my life,” he told me.

Although the area is renowned for lush, jungle-like trails, the race course mostly followed a mixture of paved and dirt roads. The trails were flat by an Oregonian’s standards, but quite hilly for many participants. The race was well organized, with fully stocked aid stations every eight to 10 kilometers. A chicken-and-sticky rice wrapped in a banana leaf handed to me at the 30-kilometer aid station was the perfect carb-protein combo I needed to push to the finish. Competitors, mostly from Western nations or other Asian countries, enjoyed the free, post-race Thai massages and Pad Thai meal.

Growing up with an outdoorsy father had me sleeping in tents every summer. However, the Thai style of camping is somewhat different from my experiences in the United States. Several of the National Parks offer rental tents that the camp staff will set up for you—albeit in a field full of other tents, overhanging bright lights, squat toilets and a canteen stocked with beer, instant coffee and the Thai equivalent of Cup o’ Noodles. Your evening at a Thai campground is likely to be less than restful, with many of your fellow campers—travelers and locals like—drinking and barbecuing late into the night.

While camping nearly 200 kilometers south of Chiang Mai at Taksin National Park in the Tak province, I explored a short trail that followed a dried creek through the bush. The trees around me grew like fingers out of the ground creating a mysterious aura. Huge birds swooped low around me, making calls I didn’t recognize. As I ran, I felt the Thai word, wing, run through me. I took flight. 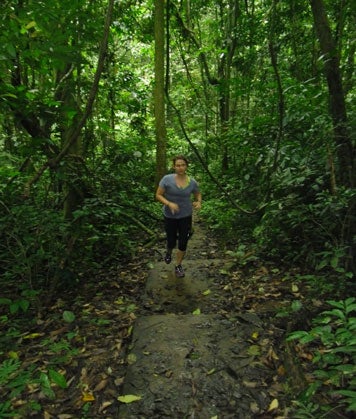 Where to Run in Thailand

Sloan Dorr is passionate about trails, dirt and travel. She currently lives in Western Maryland, and is helping to organize a race in the mountains and on the rivers in the area. Catch up with her adventures on her blog at www.thesolesearch.com.