This article originally appeared in our December 2014 issue.

quit my job on Wednesday. By Thursday morning I was on a plane to Paris. I had no idea what the hell I was doing. The one thing I did know was my objective: Run the 800-kilometer Camino de Santiago across Spain from the border of France to the terminus in Santiago de Compostela. Everything else, I’d figure out later.

I was not the first to undertake this trek. Trekkers have traversed the Camino for nearly a thousand years. In the ninth century, the devout from across Europe first began making the pilgrimage to Santiago de Compostela in far western Spain, where the remains of St. James (or in Spanish, Santiago) supposedly reside. Since then, millions upon millions of brave souls walked the trail to pay penance, ask a blessing or find answers within themselves.

All this foot traffic created an amazing infrastructure along the route. Hostels, hospitals and hospices sprung up to aid pilgrims. As a result, scores of villages popped up across northern Spain—towns that luckily still exist today. Nearly 200,000 walkers completed the Camino in 2012. But really, it’s a runner’s dream: Approximately 500 miles of well-marked trails, dirt roads and, yes, some pavement. Water, food and lodging readily available every few miles. And the guaranteed adventure of running across an entire country self-supported.

“You know, when most people quit they just go to the beach for a few days or something,” my boss said upon my resignation. By now she had grown accustomed to my casual mentions of 28-mile weekend trail runs or plans for my next 100-miler. It was nice to know that I could still shock her, even as I was quitting.

I’d said that if I ever quit, I’d go run the Camino. So, within an hour of resigning, I bought my ticket. A few hours later, I was sitting on a plane barreling toward Paris with only my passport, a race vest with a few supplies and one change of clothes, thinking, “This is crazy.” All the well-wishing emails from friends politely agreed. “I’ll see you guys in a few weeks!” I’d reply. “If I don’t die.”

The traditional starting point is the quaint French village of St. Jean Pied-de-Port, and thus it was mine too. After a harrowing first night in a dormitory with several Olympic-level snorers and a bizarre breakfast of baguette and bitter coffee in a bowl, I was raring to go. Standing on the cobblestone street at dawn, I adjusted my scary-minimal pack one last time. Now all that was left was to run the 500 miles in front of me. Deep breath. Deep breath. And go.

“Shit!” I made it 40 feet before my ultralight sleeping bag loosed itself from my pack and dangled awkwardly behind me. “Friggin’ great start,” I scolded myself aloud.

Sleeping bag reattached, I quickly began passing other pilgrims who had started earlier. Their reactions were priceless. The Spanish seemed genuinely curious, mixing questions about my run with words of encouragement. (It helped that I speak Spanish, too, I suppose.) Americans always seemed purely baffled. And the French, oh, the French. As I flew past them, they all seemed to let out the same exasperated, “Fffhkfpt,” which I believe is French for, “I am not-so-silently judging you.”

Luckily, the French countryside was more inviting, the surrounding farmland so verdant and idyllic it felt cliché. I waved at docile cows and hummed happily to myself as I began the 5,000-foot climb up and over the Pyrenees. But country roads and sunshine soon gave way to rock-strewn trails and a soggy, bone-chilling blanket of fog. After battling through lonely highland mist in France for nearly two hours, I crested the ridge, crossed the border and suddenly found myself careening down steep singletrack into Spain.

For most pilgrims this stage takes a day or two. But, luckily, I was a runner. Why stop now? The adrenaline carried me over forest paths and through tiny medieval villages, until I found myself in the vibrant streets of Pamplona in time for an early dinner. I’d run 68 kilometers in my first day. Whoops. 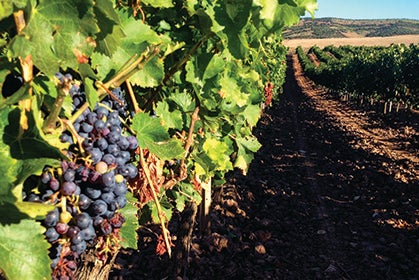 When I decided to take on the Camino, I wanted to know what it felt like to wake up every day and just … run. What would it feel like to be in near-constant motion for seven or eight hours a day, a tiny dot moving incrementally across a giant map? That’s what the Camino offers: pure locomotion.

But by day two, the euphoria was tempered with one big worry: calories. There were no fancy gels or chews in sight. To make matters worse, Spanish meal schedules are—how do you say?—leisurely. Pilgrim breakfast was typically a few free pieces of buttered bread and coffee at 7 a.m. Then, you had to wait till 1 p.m. until anything opened for lunch. And forget dinner. That didn’t start till 8 p.m. at the earliest. After a couple of days of going into calorie deficit, I found a solution: second breakfast (kind of like fourth meal). After early breakfast I’d stop at a bar or truck stop for a big slice of Spanish tortilla, more bread and even more coffee. I’d also find a grocery store and stuff my pack with whatever struck my fancy—ham-flavored Lays, gummy bears, a tin of sardines. It was weird, but it worked.

After the Pyrenees, Spain becomes very, very flat. I ran for days under the immense Iberian sky. I was surrounded by golden wheat fields in every direction. I ran through cobblestone streets of tiny stone villages, where my guidebook claimed 52 people live yet I never saw a soul.  I crossed bridges built by queens 600 years ago, peeked into cathedrals where the faithful have worshipped for centuries and bounded down ancient roads laid by the Romans millennia ago.

Illogically, with each passing day, I grew stronger and fresher. And the legend of “The Runner” grew too. In Los Arcos, I flew past cafés where other pilgrims stopped for a morning rest and heard whispers of “That’s The Runner!” My best friends became the cyclists who were riding the Camino. Running was a solitary experience, but my 60-kilometer daily stages overlapped with theirs. We traded off passing each other on climbs and flats. One day as I surged up toward the tiny hilltop town of Villaymayor de Monjardín, I passed two Spanish cyclists who cheered me on with, “Kilian Jornet! Kilian Jornet!”

In many ways, the Camino is the perfect long-form running adventure: epic, fascinating and designed to be self-supported. It’s just taken us runners a thousand years to realize it.

One final word of advice: Balance your enthusiasm with reality. At my aggressive pace, I planned to reach Santiago de Compostela in two weeks. Eight days in, I felt a twinge in my Achilles tendon and immediately knew it was all over. Tendinitis ended my journey after 288 miles. But I know that one day I’ll be back to complete what I started that Wednesday in October. Probably when I quit my next job. 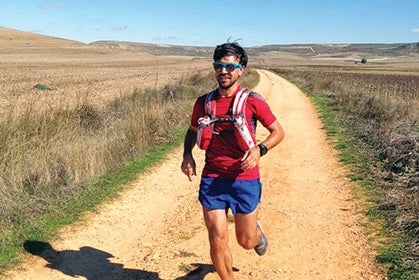 The author grits it out under a relentless Spanish sun. Photo by Andy Pearson.

Season: You can run or walk the Camino all year round, but July and August are high months when temperatures are hottest, trails are crowded and you may have to fight for a bed. The edge months—May, June and September—are generally best with moderate temperatures and less competition for beds. January and December are doable but may be wet or even snowy, particularly on northern routes.

Route: Traditionally pilgrims start on the French border in St. Jean Pied-de-Port. Fly into Paris and take the train there. You have multiple options for your route. The Camino Francés is the most traditional and definitely the most popular. The Camino del Norte is more mountainous, wet and quiet. Your journey officially ends at Santiago de Compostela, but many continue on to the “end of the world” at Finisterre on the Atlantic Ocean, another 78 kilometers to the west.

Accommodations, etc. There’s no need to book a bed in advance. Just avoid the biggest cities on weekends, if possible. Oh, and bring earplugs. There’s lots of snoring in the albergues. A great guide is A Village to Village Guide to Hiking the Camino de Santiago, by Anna Ditaman and David Landis. You can feel extra hardcore by ripping out your completed pages every day to conserve weight.

Gear. Water, food and shelter are available every few miles in towns. Accordingly, you can travel light. Pack smart, and you won’t need much more than a little soap, a change of clothes and an ultralight sleeping bag (in cold months) or a sleeping sack (for most of the year).

Andy Pearson is an ultrarunner and writer who got his start in Boulder, Colorado, but now lives and runs in L.A., where he was surprised to find that mountains exist as well.