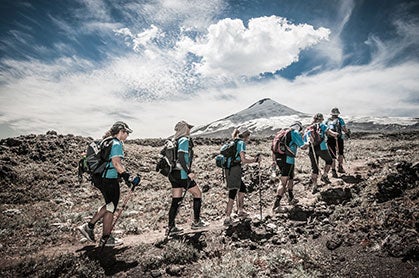 Runners lined up on signletrack through Villarruca’s lava fields. Patience and perfect timing were part of a necessary strategy for passing, as knife-point-sharp lava rocks lined the trail, waiting to cut through shoes, ankles and calves. Photo by Thiago Diz. 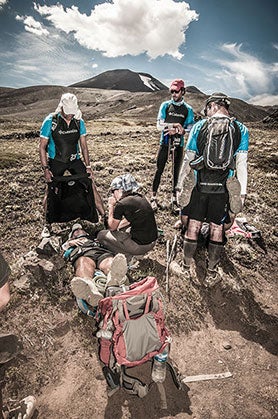 The brutal heat quickly dehydrated many runners. A helicopter soon whisked this victim to safety, in a show of competence and professionalism by the race organization. Photo by Thiago Diz.

For three days, during the 12th edition of El Cruce Columbia foot race, 2500 athletes (in team and individual divisions) traversed around three majestic volcanoes, crossing the Andes—from Chile to Argentina. The race’s 100 kilometers featured punishing ascents, descents and weather, but at the end of each race day, athletes arrived at a a camp oasis—a sea of tents—replete with unlimited food and drinks, massages, medical support and accommodating staff. Tired legs were soothed by soaks in nearby rivers or lakes.

On day one, beneath Villarrica volcano, the runners raced under  an unrelenting sun for 31.5 kilometers. Featuring 38.3 rugged kilometers, day two—the race’s toughest—climbed 1683 meters near Quetrupillán volcano. A beautiful turquoise lake at the base of the volcano provided a refreshing refuge near the end of the day. One of the race’s special moments came at this day’s end, when 78-year-old Argentinian athlete Elisa Forti arrived at the camp after a running time of 9:44:22 and was given a standing ovation (Forti’s total race time tallied 21:44:00).

On the final day (28.2 kilometers), Lanín volcano, on the Argentinean-Chilean border, provided a scenic backdrop, but heavy rain, wind and cold temperatures created additional challenges. At the finish line, the mental, physical and spiritual dedication of the athletes bubbled over in sometimes tear-jerking emotional demonstrations. 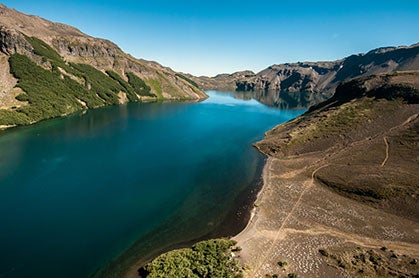 The breathtaking Laguna Azul (Blue Lagoon) with its crystal waters at the base of Quetrupilan volcano served as a potential cool down for athletes near the end of the day two. Photo by Thiago Diz. 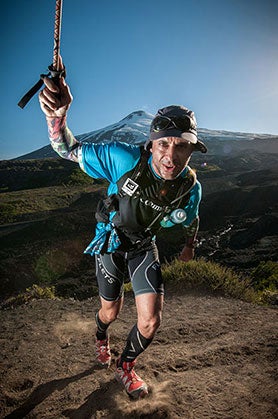