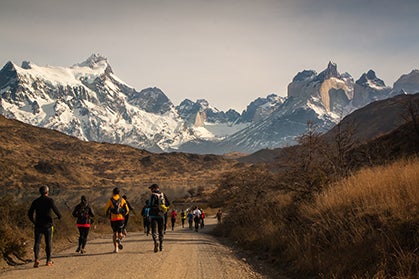 On Chile’s coat of arms, opposite a regal condor, is a crowned animal with a coffee-colored coat and coal-black hooves. This creature, known as a huemul, is a type of South Andean deer that, unfortunately, due to poaching, logging and food scarcity, is at risk for going extinct.

As the huemul population decreases, another species is on the rise worldwide—trail runners. An organization called the Nomadas International Group South America (NIGSA) believes that our burgeoning group of two-legged animals should do something for these four-legged friends and help conserve the habitat they, and we, depend upon.

Three years ago, NIGSA founded the Patagonian International Marathon (PIM), a footrace held on the unpaved roads of the stunning Torres del Paine National Park. The idea behind the race is that trail runners are land lovers—and the more we connect with and love that land, the more likely we are to protect it and, in turn, the other animals who dwell there.

A quarter of the park’s native forest was destroyed three years ago by a fire. Additionally, deforestation by logging companies is one of the foremost threats to the region—so, for every race participant, race organizers start by planting a tree in the park. 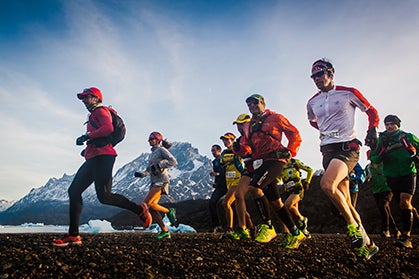 “We have focused on creating an experience that isn’t only a physical and mental challenge,” says Stjepan Pavicic, the founder and director of the Patagonian International Marathon, “but one that sends a message to the world: we must preserve this remote and pristine region of southern Patagonia.”

The PIM draws an international crowd of running folk to its spectacular stage, including many of our sport’s elite like Krissy Moehl, Yassine Diboun and Ryan Sandes. Runners from more than 22 countries have already signed up for the 2014 race, to run one of the four distances offered: 10K, half marathon, marathon and 63K. Each race distance starts at a different point along the course, but all end together at the Hotel Las Torres beneath the looming, snow-splotched granite castle of Monte Almirante Nieto.

Aid stations are placed throughout but runners will notice one distinct difference when visiting them—there are no cups to drink from. To stay in line with the focus on sustainability and NIGSA’s Leave No Trace policy, the PIM is a cup-free event; runners are required to carry either a water bottle or bladder system instead. Another practical reason for this is the region’s infamous wind and its propensity for strewing disposable cups all over the landscape.

Despite the emphasis on drawing runners from around the world, the locals definitely represent: 77 percent of participants are from Chile. In the past two years some heavy-hitters have come out, including Omar Aguilar, the legendary Chilean athlete who ran a 2:12 at the Rotterdam Marathon and Rodrigo Errazuriz, a Chilean who previously held the fastest known time for the “O” and W” circuits in the Torres del Paine National Park.

Without the land, where would the huemul roam? Where would the condors, guanacos, pumas and rhea be? Where would our feet strike? The toothy, wind-carved peaks and sculpted valleys are a magnetic draw. Most people just haven’t experienced such vast, untouched terrain before; 63 percent of registered entrants to the 2014 race will be visiting the Torres del Paine National Park for the first time.

“The mountains I’d only viewed in photos were waking up in the sunlight,” wrote the women’s 63K winner in 2013, American Krissy Moehl, in her blog, “the remaining snow fields of late spring catching and reflecting the first light and the grand silhouettes then making you tip your head back to take in their full shape.” 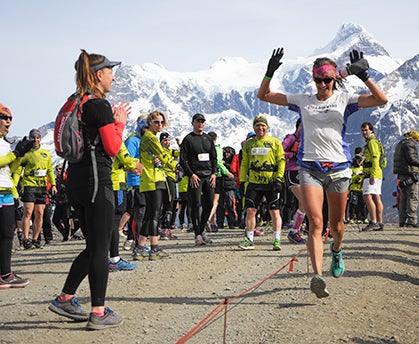 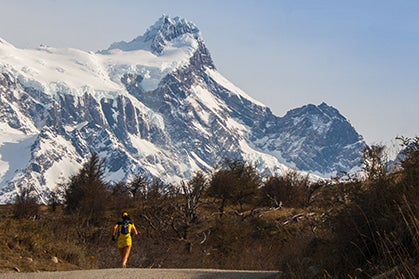 Looking at the racecourse on a map, there appears to be almost more water than land. You can imagine massive sheets of ice shaving the granite spires and carving the myriad smooth, bowl-like depressions into the land for the water to catch. The names of the lagos and lagunas add to the mystique: Grey, Pehoe, Toro, Sarmiento de Gamboa, Verde, Amarga. Scattered amongst the brown, earth-toned landscape these bodies of water contrast so starkly that their colors pop out at you, playing with your eyes.

“The sky was cobalt and the lakes were pristine and emerald and aqua blue,” says Portland, Oregon’s Yassine Diboun, who placed third in last year’s 63K. “A couple times, while being transported in a 15-passenger van, I completely missed the question someone asked me because I was so enthralled by the dramatic peaks jutting out of earth.”

The PIM’s commitment to and belief in the symbiotic partnership of animals, land and people is underscored by an event they host on the day after the big race, a group trek to the viewpoint of Las Torres—Torre Sur, Torre Central and Torre Norte, the namesake features of the park that loom like giant smooth-sided daggers, knifing into the blue sky. The viewpoint is perched overlooking a turquoise lake that sits below the water-streaked walls of granite. Wind typically races around these scoured faces, shrieking and whining in its fierce velocity. Like being in a great cathedral or place of worship, it’s the kind of place that makes you feel small.

The intent of the outing is stated concisely on the race weekend itinerary—“to share the experience of walking in the mountains, enjoying the landscape and communal environment of the group.”

The chances of seeing a huemul on the group trek may be slim but that’s ok. Runners, their legs likely sore from the race the day before, can gaze up at the sky-scraping torres, maybe even spotting the massive wing span of a condor far above. They can feel the pulse of the wind and see the energy of it in the blowing grass while knowing that their efforts are helping secure the future of the animals, land and people of Chilean Patagonia. 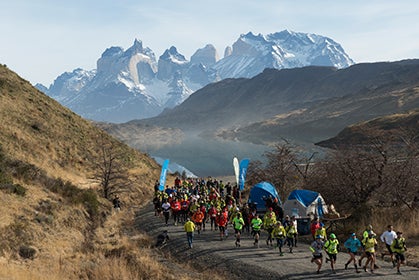 Willie McBride is an ultrarunner and writer as well as the co-owner/coach and trainer at Animal Athletics in Portland, Oregon. This year he is excited to tackle (and write about) the Tahoe 200, his first 200-mile race.