The grass underfoot is so springy and close-cropped that I feel like I’m running on a putting green. … 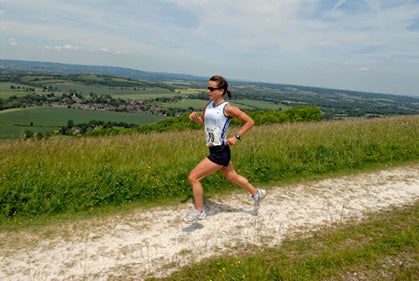 The grass underfoot is so springy and close-cropped that I feel like I’m running on a putting green. Behind me, undulating chalk-white cliffs drop hundreds of feet into the English Channel. Ahead, the main street of a storybook village, adorned with hanging flower baskets, wends past a Tudor-style inn that opened for business before Shakespeare wrote his first play. And all around, sheep watch placidly as I follow other runners through their pasture during the Seaford Half-Marathon trail race.

My family and I came to the idyllic countryside of the Cuckmere Valley in Southeast England after a sticky-sweet stopover in the party-hearty beach town of Brighton. Several days of pub grub and carnival rides made me yearn for the restorative effects of a scenic trail run. Thankfully, I discovered one of the UK’s loveliest spots and a slice of its newest national park a half-hour east of Brighton and less than two hours south from London: a region known as the South Downs.

Most Americans might not know that Brits use “down” as a synonym for a gently rolling hill, and “the Downs” refers to those famous grassy-topped limestone escarpments edging Southern England. With terrain more bucolic than bad-ass, and lots of family-friendly attractions and scenic side roads, the South Downs makes a brilliant trail-running vacation destination or a delightful daytrip from London.

“Despite the South Downs’ proximity to so many big towns and cities, it’s amazingly peaceful and beautiful,” says Martin Bulger, a veteran of some 150 marathons and ultras and founder of the Seaford Striders. His club hosts the Seaford Half Marathon on the first weekend of June.

South Downs National Park, established in the spring of 2010, protects over 600 square miles of farmland, moorland, woods and coastline. Trails, too? Bloody right! The main artery, called the South Downs Way National Trail, runs diagonally through the heart of the region for a full 100 miles point to point.

Ultrarunner Jen Jackson of London likens the South Downs Way National Trail to a chocolate box because it offers so much that’s sweet and varied about the English landscape, from quaint villages to wild woods and working farms. “In London, there is not much countryside to run, yet after an hour on the train, I can be on the South Downs Way soaking up the rural atmosphere,” says Jackson. “It’s well sign posted so I don’t need to consult a map, and it’s almost always going either up or down, so it’s a challenging workout.”

Jackson is a race director of the South Downs Way 100-Mile Ultra, held July 9 and this year is expected to draw about 200 runners. The event begins at the east end of the trail, near the seaside resort of Eastbourne and a 530-foot-high sea cliff (Britain’s tallest) called Beachy Head.

“As you climb the heights of Beachy Head, you feel like you’re on top of the world,” says Jackson. The trail reveals the sheer cliff face towering over a red-and-white lighthouse sticking up from the sea. It’s a postcard view on pleasant days, “but in bad weather, you are completely exposed to the elements while on the ridge. It can provide a rough experience in the wind and rain.”

The South Downs Way Ultra gains about 13,600 feet in elevation to its end in Winchester, a city 68 miles southwest of London.. Numerous trail races take place on the South Downs Way (see sidebar), many of them concentrated near the east end of the trail, which goes past Beachy Head and another famous portion of cliffs named the Seven Sisters.

Just east of the Seven Sisters, a hamlet of fishing cottages called Birling Gap clings to the cliff and a long staircase descends to the pebble beach. In between Birling Gap and Beachy Head, the Belle Tout lighthouse stands sentry, visible for miles as the only tall structure on the rolling green mesa. Barely saved from erosion, the towering cylinder was moved 56 feet inland and reopened as a bed and breakfast in mid-2010.

This coastal stretch past Birling Gap and over the Seven Sisters to Cuckmere Haven, where the Cuckmere River flows into the channel, is a favorite training route for Stuart Mills, a seven-time winner of the Beachy Head Marathon.

“The Seven Sisters are actually eight climbs, some short and steep, others longer and less steep, so attacking the climbs and recovering on the descents makes a natural fartlek-type session,” says Mills. “The trail from Beachy Head to Cuckmere Haven has great terrain for running, consisting of short grass, and being a chalk base, there’s never any mud.”

The South Downs Way turns inland from Cuckmere Haven, traverses the wide-open and rolling Seven Sisters Country Park, and intersects with the A259 highway. At this point it skirts Friston Forest, where many more trails branch out.

The South Downs Way also cuts inland and loops back from Beachy Head near Eastbourne, leading to the small towns of Willingdon and Jevington. A trailhead called Butts Brow next to the Beehive Plantation on Butts Lane (yes, these names are for real) provides a good starting point for running the trail through grassland and past farmers’ ponds, approximately six miles to the coast.

“There are spectacular views whichever part of the South Downs you’re running on,” says longtime runner Julia Armstrong, who lives in Eastbourne and has a marathon best of 2:36. “The grassy downs give way to chalky, muddy, stony paths and patches of forestland. It’s completely magical.”

Where to Stay. Go coastal in the pebbly beach playland of Brighton, where entertainment on the pier and in the pubs can get as lively as Mardi Gras. Great South Downs running around Beachy Head is just about 20 miles east.

In the Cuckmere Valley, the quaint village of Alfriston has charming B&Bs and pubs (if traveling with kids, be sure to stop in Alfriston at Drusilla’s small-animal zoo). For an inland destination infused with British history and Elizabethan architecture, stay at the northwest end of the South Downs Way in the city of Winchester, just north of Southhampton.

Seasons. Summer is the peak time to see the seaside destination in its blue-sky glory, but you can run there year round. British temps rarely dip below freezing and generally max out in the high 80s.

Resources. For a guide to the South Downs Way National Trail, www.nationaltrail.co.uk/southdowns, or the Long Distance Walkers Association, www.ldwa.org.uk. For an overview of the South Downs National Park, www.southdowns.gov.uk. For trails in Friston Forest, search Friston at www.forestry.gov.uk. For trails off Butts Brow, www.eastbourne.gov.uk/environment/countryside/walks.

Retailers. In Brighton, The Jog Shop (www.jogshop.co.uk) at 39b George Street is a specialty running store, and can offer tips on where to run in the Sussex area. In Eastbourne, The TriStore (www.thetristore.com) at 49 Grove Road sells off-road running gear and dispenses advice on South Downs routes.

June 5, The Seaford Half Marathon from the coast through Alfriston and the Cuckmere Valley, www.npslions.co.uk/halfmarathon/halfmarathon.htm. June 11, The South Downs Marathon on a hilly inland route, www.209events.com.June 24 – 26, South Downs Way Run Challenge from Winchester to Eastbourne, 106 miles over three days, www.votwo.co.uk.

October 22, The Beachy Head Marathon is one the biggest off-road marathons in the UK, www.visiteastbourne.com.

First Sunday in March 2012, Steyning Stinger Marathon and Half Marathon through the South Downs between Worthing and Shoreham-by-Sea, www.steyningac.co.uk/the-stinger.

The Science Behind How Elite Runners Train