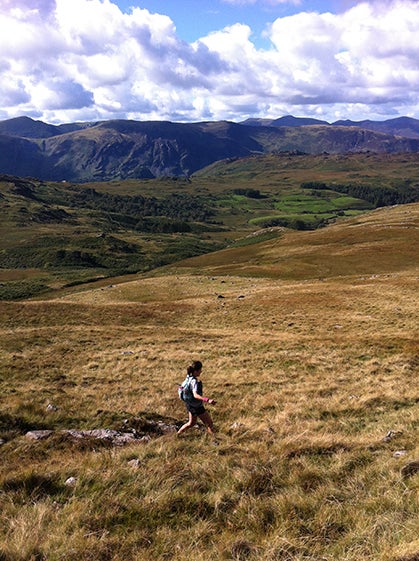 Editor’s Note: This is the third installment of a mini-series on trailrunnermag.com about women running multi-day adventures on the trails. See part I, a Q&A with Jo Meek, or part II, a Q&A with Christine Hägglund.

“Are you the girl running across England?” was a question I heard many times.

In cozy pubs, sipping a pint after the day’s exertions, and at breakfast tables over heaped plates of “full English,” walkers recognized me as the woman who had jogged past them. It wasn’t difficult to organize a multi-day run of the 190-mile route crossing the country, yet runners were a rarity, generating curiosity and amusement.

Over 10 days last summer I finally ran the classic pilgrimage route that I had long wished to add to my “trail running CV.” Carrying just a light pack, I used one of the many walking companies to move my bags, and to transfer me to the start and from the end, having left my car in charming Kirkby Stephen, roughly mid-way. 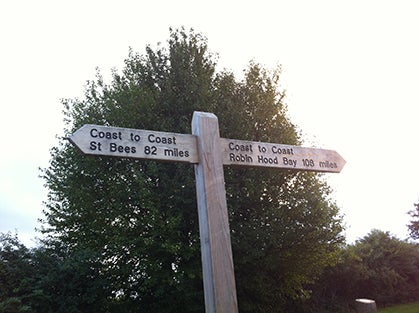 Devising the walk was a labor of love for Alfred Wainwright, the Borough Treasurer of the Lakeland town of Kendal for 20 years, who wrote and beautifully illustrated many guide books to his beloved Lake District. In retirement, he made many trips with his second wife Betty, to plan the new route.

Launched 40 years ago, the trail starts at St. Bees Head on the Irish Sea, and passes through three national parks in the north of England: the Lake District, Yorkshire Dales and North Yorkshire Moors. It finishes at Robin Hood’s Bay, on the North Sea. Using areas of open access, it crosses places of outstanding natural beauty, attracting thousands of walkers each year who, on average, take 14 days to complete it. 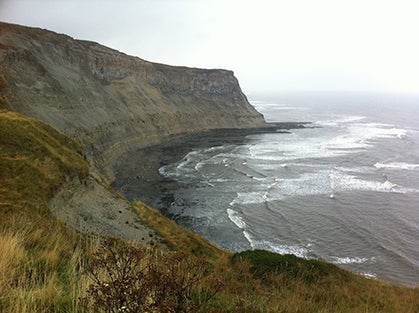 The Birthplace of Fell Running

These uplands gave birth to the sport of “fell running,” the word “fell” being a northern expression for hill or mountain. Shepherds and guides were skilled in covering this terrain quickly. In the 1800s, village shows began to include fell races where they would compete, racing and navigating to trackless summits of one or more hills.

Fell races are still popular, with iconic events such as the 23-mile Yorkshire Three Peaks race, but hikers on Britain’s mountains are often shocked when passed by stick-thin runners wearing nothing more than shorts, vest and a small pack even in the worst weather. More recently, trail races, such as the 100-mile Ultra Tour of the Lake District, have become popular. Many of these races use well-marked trails rather than open moorland and trackless hillsides, and they climb to mountain passes, rather than the tops.

Wainwright’s Coast to Coast route is not an official national trail, but it is one of the most popular long-distance hikes in the country and attracts visitors from all over the world. The route is generally not sign-posted, but with a map and compass, navigation will cause few problems to the trail runner. In the height of summer, you will be accompanied by walkers who will happily share the trail’s highlights over a drink in a pub beer garden. In the midst of autumn, you may find yourself gloriously alone on the hills and moors, with only squawking red grouse and scurrying pheasants for company. 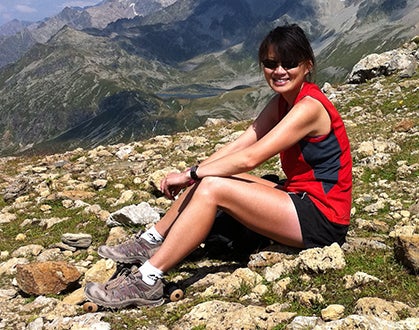 There was wonderful variety to the landscapes of my adventure. I climbed Cumbrian mountain passes high above lakes glistening in sunshine. Swaths of cotton grass whitened the fells, while sheep grazed in pastures blazing with buttercups. In the Yorkshire Dales, wind rang in my ears as I descended starkly beautiful moorland to lush Swaledale and through fields dotted with pale limestone barns. Above the valley, hidden hillsides lay wounded and scarred by the earlier lead mining industry. Crossing North Yorkshire, I ran across brown and purple, bilberry and heather-clad moors, where ancient stone faces and signposts loomed from morning mist.

By Grisedale Tarn, I was greeted by two American couples alongside a tiny woman, likely in her mid-70s, placing her trekking poles carefully, while moving slowly up the path.

“Hey, Mom, that mountain up there is Helvellyn,” said one of the men in the group, looking up from his map and pointing to a jagged, gray ridge against the deep blue sky. “Didn’t we climb that 30 years ago?”

A day later, I met the group once again, this time resting close to a fell called High Street, named after the ancient Roman road that once ran over its summit.

They were walking the Coast to Coast trail over 15 days. Averaging less than two miles an hour at the older woman’s pace meant a 5 a.m. start each day and trekking until the last of the daylight dimmed. As I left them, I imagined a mother taking her children up the English mountains and returning a lifetime later, to fulfill a long-held dream. 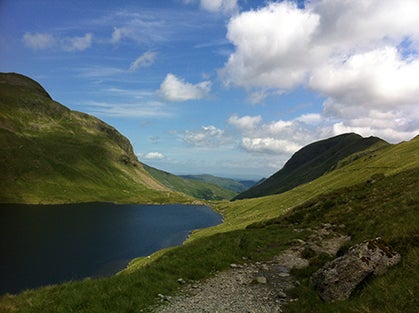 On a cool, breezy afternoon, I trotted along cliff-top trails, toward my final destination of Robin Hood’s Bay. This rugged coast, often shrouded in mist, had seen many wrecked ships in the past. Passing dog walkers, I dropped steeply on yellow gorse-lined footpaths to the village of colorful fishermen’s cottages, where tourists in the narrow lanes were oblivious to my journey’s end.

As tradition demanded, I wandered across the dark, shining sand to the blue-gray sea where I tossed in the pebble that I had carried in my pack from the beach at St Bees, before dipping my feet in the water. Here, by the cold waves of the North Sea, a woman in colorful hiking gear beamed at me.

“Hi there,” she said. “Didn’t you run past me yesterday? My legs and feet hurt just walking. Why on Earth are you running it?”

I grinned and laughed as I wondered how to respond. Quite simply, with such great trails, beautiful scenery and someone else to carry my bags, the question really was, “Why wouldn’t I?”