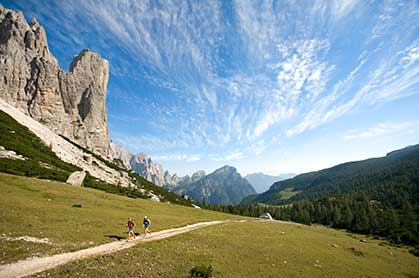 Janine Patitucci and Amy Rasic running the Alta Via 1 Trail on day one, nearing the Civetta. Photo by PatitucciPhoto.

I have never had a problem being Italian. Overly dramatizing trivial events and swinging my hands when I speak (loudly) come quite naturally. And, like most Italians, I love to broadcast, advertise and generally promote my Italian heritage. We are a proud people. A visit to Italy reveals why Italians do it right. Consider: Armani, Ferrari, Michelangelo, Rome, prosciutto, espresso, pizza and pasta-La Dolce Vita!

In the summer of 2006, my wife, Janine, our friend Amy Rasic and I traveled to the Dolomites of Northern Italy to find out if the trails, mountains and huts would prove as fantastic as all other things Italian.

The Dolomites feature massive towers and peaks of light-orange- and gray-colored dolomitic limestone. It is an idyllic landscape with tiny villages dotting narrow valley floors, and sheep and dairy cows wandering the green, grassy hillsides that suddenly terminate at the bases of the stone walls.

We chose a section of the Alta Via One Trail, the premier high route through the Dolomites’ most dramatic peaks and landscapes, linking villages, roads and huts.

Beginning near the northern town of Dobbiaco, the trail winds its way south, staying high in the mountains and connecting a series of huts until it reaches Belluno 150 kilometers later. Thanks to the well-worn path and relatively mild terrain, it is one of the easier long trails in the Dolomites and makes a great running tour.

Lacking time to do the entire Alta Via One, we began near the middle and worked our way north. Our entry point was Agordo, a town near the base of the Civetta, an El-Capitan-like wall of dolomite. Three thousand feet of steep trail straight up from the car put us on a high plateau and linked to the Alta Via One Trail.

A newcomer to European trails, Amy, a certified Rolfer from Bishop, California, was in awe at the sheer relief and at how the trail led us among gothic-like formations.

Five miles into the Alta Via, we arrived at a Malga, or family owned mountain-dairy hut. Spread throughout the Dolomites, these working farmers offer fresh milk and cheese, dried meats and sometimes coffee to hikers.

“Now I see why you didn’t seem concerned ab out carrying food in our packs, ” said Amy, as the crowded hut came into view. 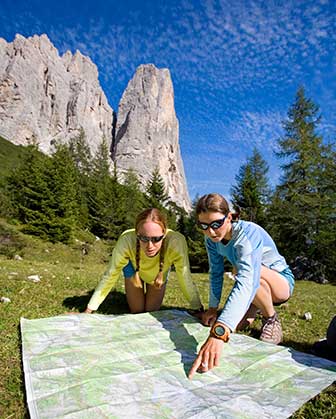 Let’s see … if we drop down here, we can grab a cappuccino, then it’s only a 3000-foot climb back to the Alta Via 1. Let’s go! Photo by PatitucciPhoto.

Arriving at the Malga mid-day, we squeezed into seats at an outdoor table next to an Italian couple and their poodle, and snatched a menu. We ordered a local cheese platter, a porcini mushroom pasta and a bottle of red wine.

“This will be the first running trip I’ll gain weight on,” Amy joked. “It takes more than a 13-mile mountain run to burn a cream sauce and cheese assortment. ”

After lunch we hit the trail, which meandered through green grass beneath the 3500-foot, eerily vertical wall of the Civetta. In the distance loomed the 11,000-foot Marmolada, the range’s tallest peak with the Dolomites’ largest glacier gracing its north side.

Soon, early evening was upon us and we were still about four miles from the Coldai Hut, which presented a problem unique to the European hut system—dinner was set for 7 p.m. sharp. Miss it and you go hungry.

We quickly calculated how much time we would need to take photographs in the golden light and still make dinner. It was going to be tight, and I was anxious.

When I lived in Italy in 1997, my Italian friends would often implore, “Tranquillo, tranquillo, Patitucci.” Italians prefer a slower pace, and now those words echoed but there was simply no way I could miss dinner.

“Dan, we came here to work and enjoy the mountains, not to be inside a hut for sunset,” said Janine.

“Yes, but maybe we can work quickly and keep moving,” I said, employing waving hand gestures for emphasis.

Luckily, reasoning and Euro travel savvy won out. This being Italy, one thing was certain: dinner would be late.

So we moved on, photographing occasionally, carving through switchbacks, winding alongside a small creek, leaping from foot-worn rock to foot-worn rock. We were like kids at Disneyland, hooting and hollering as we descended to a bench with two tiny azure lakes. From the lakes we climbed a small pass to a saddle where a small group had gathered to watch the sun dropping behind the mountains. We knew we were nearly home; Italians don’t stray far from dinner.

Upon arrival, we discovered that dinner was indeed late, found our seat and were handed menus. We were accustomed to the French and Swiss huts with their fixed menus and a love-it-or-leave-it policy. Pizza or pasta? Salad or soup? I began considering pizza and pasta. During our four-course meal, we enjoyed watching a birthday celebration in the adjoining room. Twenty drunk Italians on a Via Ferrata (see sidebar) tour  sang and danced on tables as platters of grappa, a deadly alcohol made from the second pressing of wine grapes, were passed around.

“A little different than life in a tent with dehydrated chili and iodine-flavored water, eh, Rasic?” I commented.

“Sorry, did you say something,” said Amy, looking up from her menu. “I was trying to figure out what to have for dessert.”

After escaping the dining room we found we were the last to make bed selections. As a result, we were guaranteed the top story on three-tiered bunk beds. I climbed up the teetering bunk and crawled into bed trying not to think about the 10-foot drop to the floor. With fears of having to climb down through two tiers of snoring hikers if nature called, I faded off to sleep. 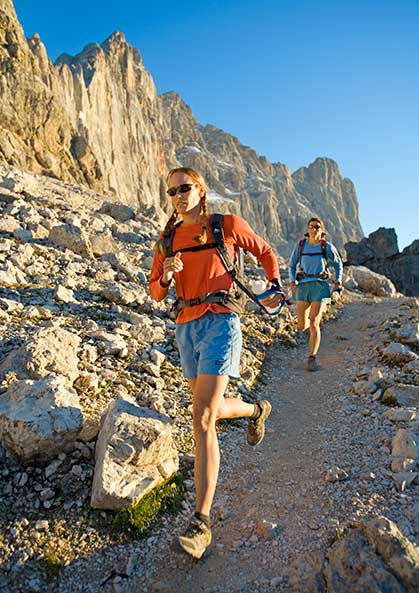 Rasic and Patitucci pick up the pace below the Civetta in a rush to make the dinner bell. Photo by PatitucciPhoto.

The next morning we were greeted with coffee, fresh bread and butter. Early morning sun warmed the hut’s deck where everyone gathered to study their day’s objectives.

For us it was a descent to a valley, followed by a 2000-foot climb up to the Alta Via and then about 12 miles of trail to the next hut, the Rifugio Nuvolào.

Studying the map revealed a worrisome situation—there was a section of trail that was at least seven miles long without a hut, restaurant or bar. I cheered up, though, as I discovered that we could take a nearby chair lift to the valley below, saving our knees a pounding. Ah, Italy!

After our chairlift ride and half-hour cappuccino stop (tranquillo, tranquillo!) at a roadside café, we were ready to run. A 45-minute climb placed us on another high plateau and the Alta Via Trail. Once again, we were rolling up and over glacial moraines, climbing gentle trails through forests of Larch trees and descending winding singletrack in open meadows.

The next several hours justified every penny we paid for our airline tickets. Always gaining elevation, we were soon on a ridge with a steep eastern edge that dropped away to the distant town of Cortina d’Ampezzo. Soon the trail descended from the ridge and wandered through a massive open plain of boulders. Giant towers loomed. The landscape was surreal, and the darkening clouds brought a sinister feel to the air.

We ran up a short pass to a saddle. Now, all that was left was a descent to a road and quick climb to our next hut. However, a boisterous group of Italian hikers came charging up the trail, all speaking at the same time, their arms waving. Laughter and the rings of cell phones filled the air. Slowing our pace to weave through the crowd and saying, “Buon giorno,” we continued to the hut.

The last day involved a short, six-mile run to a well-traveled road outside of Cortina, home of the 1956 Winter Olympics. This section of trail wandered through an area called the Cinque Torre, or Five Towers, which is famous for its World War I history. Still in place are the very trenches, bunkers, artillery platforms and tunnels used by the battling Italian and Austrian armies. Our run turned into more of an interpretive walk, as we stopped frequently to study these artifacts.

After three blissful days, we arrived at the final stop where our car waited—parked at a strategically planned restaurant. Here, we enjoyed one last round of coffees and torts before loosening our laces and piling into the tiny rental car.

While pulling out from the parking area we saw Alta Via One heading off into the distance, sad that we wouldn’t be running it and experiencing the laughs and fine food at a hut this evening.

For running, eating, the landscape and chance meetings with amazing characters, Italy truly plays the ideal host. In a country where nothing is in much of a hurry, I was already feeling the need to rush back for more of La Dolce Vita. 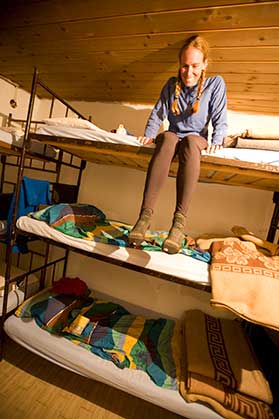 Rasic ponders the consequences of rolling off her bunk in the night. Photo by PatitucciPhoto.

Translated: A Via Ferrata is an “iron way”. They are in fact, very unique climbing routes on the massive walls of the Dolomites. Thanks to an abundance of ladders, cables and posts, a minimally geared-up hiker can literally climb thousands of vertical feet, relatively safely and often without ropes.

Originally installed in WWI for soldiers to patrol the high cliffs along the Austrian-Italian border, these systems for moving about in the mountains have remained and are updated and maintained for hikers wanting a bit more excitement. A visit to the Dolomites is not complete without sampling what is considered the best Via Ferrata in all of Europe.

Necessary gear includes a harness, helmet, gloves and a special Via Ferrata “kit.” The kit allows the climber to slide two slings with carabiners along the cables providing protection in the event of a fall.