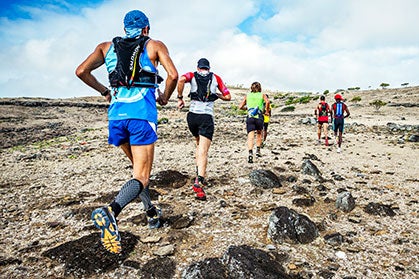 Beta: A verdant, volcanic isle emerging from the cerulean Indian Ocean more than 370 miles east of Mauritius, 67-square-mile Rodrigues is home to 37,000 Creole inhabitants (a mix of African, Madagascan and French blood), thousands of Rodrigues Flying Foxes (fruit-eating bats with an almost-three-foot wingspan and no fear of humans), a tropical climate, a robust trail system of approximately 100 miles and myriad other surprises.

As a sport, trail running is in its infancy on the island. The island’s token races, the Trail de Rodrigues 38K, 10K and 5K (pictured), took place for only the third time in 2012, although they managed to attract 700 participants. This tiny, hilly patch of green is accessorized well with singletrack and doubletrack that are mostly used by locals, who walk everywhere. With an island map and a willingness to explore both marked and unmarked routes, you can trail run for a couple of days among beaches, sea cliffs, livestock, villages, farm fields and the island’s 1306-foot high point, Mont Limon.

Difficulty: Rolling, runnable singletrack and doubletrack is  the island norm. The majority of trails aren’t labeled on the map or signed, but you won’t run more than three miles without encountering a village. The isle has a couple of uninhabited ridges and canyons; trails among these can be briefly technical with exposure, scree, roots and steepness. Those unaccustomed to heat and humidity will find an added climactic challenge.

Logistics: Rodrigues is served one or more times daily (depending on season) by commercial air flights and once a week by a ship from Mauritius. Major airports that connect Mauritius with the rest of the world include Dubai, United Arab Emirates, and Paris, France. Tourism is budding so accommodations and eats are simple and authentic: think guesthouses, bungalows, fresh seafood for each meal as well as Indian- and African- influenced cooking styles and spices.

The Trail de Rodrigues races take place in November, just a couple  of weeks after the geographically close Réunion Island’s Grand Raid de la Réunion, offering an opportunity for a southern Indian Ocean racing and island-hopping vacation. Consider trail running for half- or full-day Rodrigues explorations, or connect overnight accommodations and rove the island for a couple days as a pedestrian. Camping is allowed by permit from the Rodrigues Tourism Office (www.tourism-rodrigues.mu).