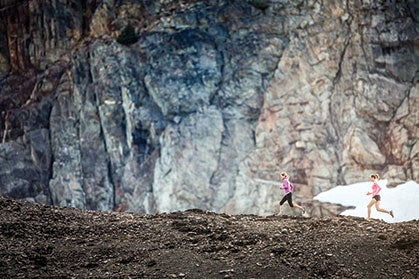 BETA: The prehistoric peaks of Whistler Blackcomb’s alpine zone are home to over 30 miles of hiking and running trails, including the new dedicated running route called the Highnote Trail. At 7000 feet above sea level, this trail traces the peak of Whistler Mountain, weaving through rugged terrain and alpine meadows into Garibaldi Provincial Park. Along the six-mile loop, runners are treated to stunning vistas of Whistler Village, Cheakamus Lake and glacier- capped mountain ranges.

DIFFICULTY: Strenuous in parts. Early morning is the best time for alpine running as summer afternoon temperatures can peak above 85 degrees.

INFO: Whistler Blackcomb is located two hours north of Vancouver, British Columbia. The Sea to Sky Highway is known as one of the most beautiful drives in North America, snaking through breathtaking stretches of ocean road and fresh-smelling rainforests with views of looming glacial peaks.

Once in Whistler Village, runners take a 25-minute gondola ride up Whistler Mountain or travel by open-air chairlift up Blackcomb Mountain. The Highnote Trail is located on Whistler Mountain and is accessed by a second chairlift ride (about five minutes) to the absolute peak of Whistler.

Start behind the massive stone Inukshuk statue at the top of the Peak Express chairlift; runners will enjoy stunning views of Black Tusk and Cheakamus Lake as they descend through rugged terrain that mellows into a rolling course. Loop back to the Roundhouse Lodge by heading north at the trail junction away from Flute Summit and Singing Pass.