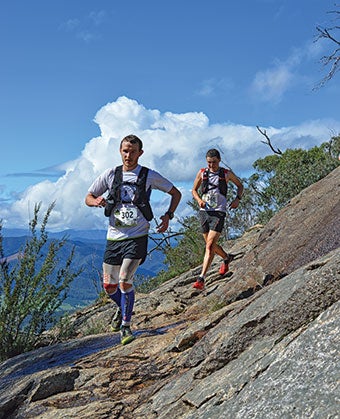 Ben Duffus and Blake Hose near Mackey Lookout, around 24 miles into the Buffalo Stampede. Photo by Oliwilson.com

While running in Australia’s first-ever Skyrace this past April, I caught up with a guy named Ben. I was new to the area, so you can imagine my excitement when Ben asked me something that sounded like, “So how’s kangoing?”

Being a savvy conversationalist and not wanting to miss a beat, I assumed that he regularly participated in some sport called “kangarooing” (pronounced “kango-ing” with an Australian accent), which I hadn’t heard of but felt I could piece together: some kind of kangaroo watching/chasing/hugging.

“Well, it’s awesome!” I told him. “We keep seeing them all over the place and I got a lot of good photos and they’re so cute with their little arms … ” and so on until Ben interrupted me and asked, “What are you talking about?” And I asked him what he was talking about, and he said he was asking about his friend Caine—as in, “How’s Caine going?” And I said I was trying to catch kangaroos, because we were in freaking Australia! And that’s about where our conversation ended.

But the race didn’t end there. This was the Buffalo Stampede Ultra, a brand-new race through 46.9 miles of Australia’s biggest mountains, the Victorian Alps. Sure, the smallest continent isn’t exactly known for having huge mountains—in many ways, these rolling hills reminded me of the Appalachians, with their decidedly un-striking forested exterior hiding a profusion of plant and animal life—but that doesn’t mean they were easy to navigate. The race subjected runners to an out-and-back course with a total of 14,911 feet of climbing. All of this on trails and logging roads, or more like logging tracks, because no normal vehicle could possibly negotiate these 45-degree slopes.

The “Vic Alps” are in the southeastern corner of Australia, between Sydney and Melbourne, where they rise steeply out of the green valleys in great dragon’s-back ridges of rock and trees. April being Australia’s autumn, the weather was warm and humid, much wetter than I had expected. In fact, rain fell hard for nearly a week leading up to the race, and even let loose a downpour on racers still out on the course in the evening. All this moisture, of course, makes for thick vegetation. Everywhere we went, golden grasses swayed in the breeze below forests of flowering eucalyptus.

For me, the best part of running in Australia was that everyone called the mountains “the bush.” This led to comments like, “How’s the bush today?” and, “That’s some hot bush, am I right?” I initially thought that the Australians missed my hilarity entirely, but later I realized they knew the whole time exactly what “bush” means in America and they simply humored me with good-natured indifference.

That verified the most consistent remark I’d heard about Australians: that they are really nice people. Prior to the trip, my uncle Ben, himself a veteran of at least one trip down under, treated my girlfriend, Reese Ruland, and me to a long and winding discourse on exactly why Australians are so kind. According to him, it’s because they have very few people relative to their landmass; the continent is 80 percent of the area of the United States, yet it has just 7.2 percent of the population—meaning, Uncle Ben explained, that they don’t get quite so territorial as people in other, more crowded countries: “They just have so much damn space out there that they need each other.”

My own opinion prior to the trip was that Australians feel the need to band together for safety, because snakes, spiders, huge kangaroos, sharks, the overwhelming heat of the desert sun and just about everything on that continent can kill them. Whatever the real cause, we simply found that, just as everyone had said, the Australians were indeed very nice.

Australian ultrarunner and self-proclaimed celebrity confidante, the ever-confident Marcus Warner picked Reese and me up at the Sydney airport in his sleek black Audi and whisked us away to a swanky flat overlooking Sydney harbor. We toured the city sights, ate the finest sushi, attempted (and failed utterly) to surf and passed evenings in the uber-hip and hilariously named suburb of Woolloomooloo before finally leaving the city for the mountains. We drove for seven hours to reach the race’s host town of Bright. It lies in a quaint patchworked valley filled with vineyards and sunny pastures where, incidentally, the kangaroos like to sun themselves. 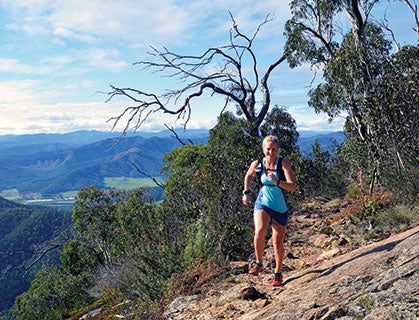 Anna Frost on her way to winning the women’s title in the marathon-distance Buffalo Stampede. Photo by Oliwilson.com

The Buffalo Stampede was designed specifically to be a part of the vaunted Skyrunning World Series, a collection of international races that pit runners not just against each other but also against huge climbs, variable weather and the multitude of dangers inherent to mountain environments. You might think such descriptions would discourage the potential field, but, between the ultra on Saturday and the marathon on Sunday, the Buffalo Stampede attracted nearly 500 runners.

Marcus had enough experience Skyracing in Europe to help race directors Sean Greenhill and Melanie Michael create a course that fit these requirements. Better yet, he had the wisdom to include a giant after party. This latter event monopolized the conversation long enough that Reese, just off a long-term injury, decided against all medical advice to jump into the ultra just so she wouldn’t miss the party. We all applauded such a selfless act of valor and raised many toasts to her at said party (during which she was laid up in bed massaging her tortured legs).

From the start I felt strong, but very quickly the course unleashed a brutal series of climbs and descents that crushed my legs and nearly my resolve as well. These climbs weren’t gigantic—most of them no more than 2,000 feet—but few had switchbacks. Instead, the course went either straight up or straight down, in all conditions—rocky, muddy, grassy and occasionally even on a recognizable trail. Much of this took place in the forest, but the extensive logging tracks allowed lots of exposure to the sun, which, as the day progressed, beat down mercilessly.

The organizers also included a race-within-a-race called the King of the Mountain. To win, you had to have the fastest combined times up the first three major climbs on the course. This had no relation to your overall place; if you ran the three climbs faster than anyone else, regardless of position, you won $1,500. This made things interesting. Which is to say, I could never relax because I just knew some bastard back there was sprinting up each climb and then walking in between. Ultimately, this reduced me to a leaning stumble over the race’s final miles—I blew my reserves charging up the first three climbs, and could barely hang on for the rest of the race.

The “Buffalo” part comes from Mount Buffalo, one of Australia’s oldest national parks. For the third and largest of the race’s hills (and the climax of the King of the Mountain competition), we climbed 3,280 feet up to the top of Mount Buffalo. There, we ran a small circuit atop the plateau. Waterfalls rushed off its cliffsides, which are large enough to entice rock climbers the world over. It felt like an island in the sky, populated with lakes, native gum and ash trees, and refreshing cool breezes.

The rocks were old and heavily eroded—Australia is the oldest continent geologically—and we got a taste of that as we ran along the plateau. The course wound through several sections of caverns and slot canyons, some of which required special skills like chimneying between rock walls and crawling through slots I was just sure were teeming with poisonous snakes.

Since it was an out and back, I reached the turnaround with the sunny sense that I knew what was coming, that I had already done the whole course and just needed to repeat my steps. But shortly thereafter I realized that I knew exactly what was coming. In fact, I knew precisely how much pain to dread. As I ran back down the trail from Mount Buffalo, with three daunting climbs ahead of me and already feeling the effects of the course, I tried to prepare myself mentally for the climbs to come. But it was no use. I felt destroyed.

Still, I managed to win both the overall race and the King of the Mountain race. This was largely due to bad days on the parts of several of the area’s top runners, including Ben Duffus, Blake Hose and Grant Guise. Locals (the aforementioned) Caine Warburton and Andrew Tuckey finished close in second and third. The women’s race was much more hotly contested. Jacinta O’Neil (try understanding that name when told to you in an Australian accent) came in just a few minutes ahead of Marcus Warner, who isn’t a woman but deserves mention for getting his ass kicked by Jacinta. Susan Keith and Katherine Macmillan came in second and third for the women. All of them were Aussies, and all of them were invited—with the top Aussies going for free!—to travel to the Skyrunning World Championships in Chamonix, which were held in June.

The coolest part of mountain running is that every course is different. Even the same course on different days can offer a totally new experience. Reese and I went to Australia to run an ultramarathon—in fact my 28th ultramarathon—but even after so many races, I didn’t know what to expect. And if I go back, I would only have a vague idea. Aside from Buffalo, you could run ultramarathons in the Blue Mountains outside Sydney, in the D’aguilar mountains near Brisbane, in tropical forests in northern Queensland or in the middle of the desert out west. Australia has a lot of potential for mountain runners, and by the time we went home, I felt we’d only begun to gain a foothold. I’d certainly go back. I mean, I’m dying to get back in the bush.

Getting There: Fly into Sydney or Melbourne, take the train to Wangaratta, then a bus to Bright. Or rent a car. Australia is huge, and a car offers the most versatility.

Accommodations: The bike-themed Bright Velo Café caters to all athletes, offering great food, coffee and drinks, and serving as a meeting point for visitors. They rent out rooms too, but they don’t have many, so book early!

Other Things: Check out nearby Mount Hotham Ski Resort for its views and high-altitude running. Also within a four-hour drive from Bright is Australia’s highest point at 7,310 feet, Mount Kosciuszko.