A journey through jungles, villages and hailstorms, fueled by determination and camaraderie 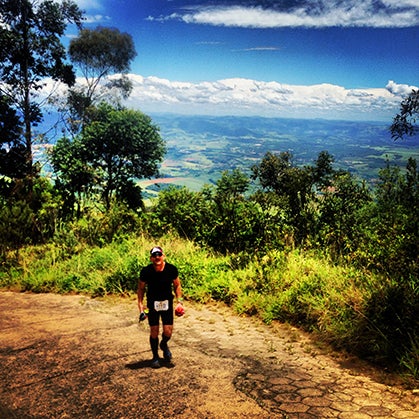 At 10 a.m. on Wednesday, January 15, I land at Rio de Janeiro International Airport and call my wife of 21 years, Monica, who is Brazilian, to let her know we’ve arrived safely. Two days later, I’ll be running the Brazil 135 Ultramarathon—my second time doing so—along with two friends, Kellie and Kevin. It will be both of their first 135-mile races. Kevin’s girlfriend, Liana, has also come along to crew for us.

“Why didn’t you come to Brazil?” Liana asks my wife over the phone.

“Oh, you’ll understand why soon,” she tells her.

Kevin asks me where and what time we are supposed to meet my Brazilian brother-in-law, Alex, a former pro surfer, who plans to help crew for us. I have to be honest and admit I have absolutely no idea, and that Alex doesn’t have a phone … unpredictable; welcome to Brazil.

We make ourselves comfortable at a café and enjoy strong coffee with cheese bread until Alex shows up a few hours later. He says he’s found a friend, Billy, an artist in Rio de Janeiro, who is willing to help crew for us as well. We will meet him after we pick up our car.

When we step outside, we are hit with a blistering “no ozone” sun and heat index over 100 degrees. The “car” turns out to be a VW Kombi microbus. It has no air conditioning, no power steering and the passenger door won’t open. Nevertheless, Alex is certain the bus will be the best vehicle for difficult terrain support. The roads are very muddy, especially after it rains—sometimes altogether inaccessible. 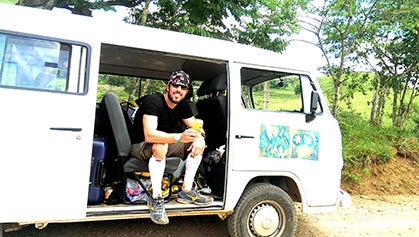 The Brazil 135, a realization of race director Mario Lacerda’s dream, features 135 miles and 35,000 feet of climbing. It takes part on a storied trail—the “Caminho de Fé,” also known as the “trail of faith”—whose history goes back hundreds of years as a religious pilgrimage. Each mountain climb is rewarded by a descent into each unique village, a church and folks who whole-heartedly support the ultrarunners.

This would be the 10th Anniversary of the Brazil 135. Mario pushed all boundaries to make it a special one. There are solo and relay options, as well as an expanded field to accommodate the large number of applicants. He added an unsupported class—which 18 brave racers signed up for—with just five drop-bag points for racer supplies. There’d also be real-time athlete tracking. 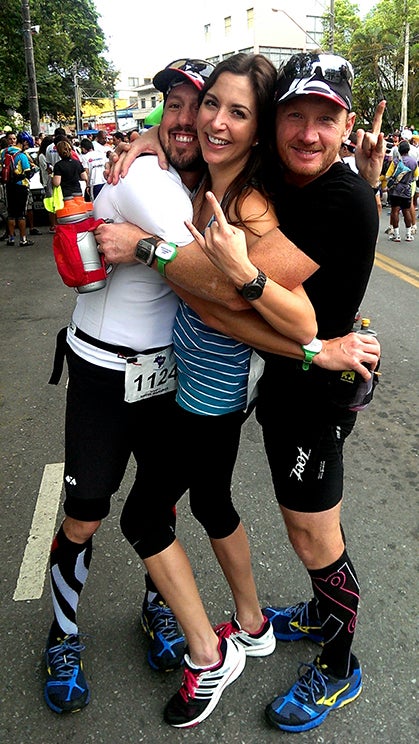 Kevin, Kellie and the author at the start line

Mario has a traditional whistle that ushers in the beginning of the race—something he has learned from his 20 years in the Brazilian marines. Mario’s wife, Ileana, leads a countdown from 20 before all the athletes shout “Go!” in unison, and the Brazil 135 is officially underway.

Day one contains the most difficult technical section of the race, through dense jungle trails.  If this is your first Brazil 135, you start to panic, thinking, “This better not be the whole course or I won’t make it!” The section ends on a long decent into Águas da Prata, the first of many little towns that offer respite from long climbs and hard, steep descents.

Next up is the biggest climb—up Pico Do Gaveão, which lies 5,390 feet above sea level. Kellie hits a low spot on the climb. Luckily, there is cloud cover to ward off the summer heat, but the climb feels endless. Billy, our Brazilian artist turned crew member, jumps out of the van and jogs up to Kellie in flip flops. After the final 5K climb, we turn to come back down and sure enough, Billy is climbing with Kellie and—as I later found out—doing all the talking.  At the bottom of the descent, we refuel at our support van and Kellie is feeling good again.

Climbs and towns come and go—a mini Tour de France of running. Directions are tricky and not everyone speaks English, but all of this is balanced by runners who are all on the same path and eager to help one another.

At Andradas, kilometer 63 (roughly 38 miles), our crew misses us looking for ice, which is not easy to find. The heat is not the only challenging factor here—there is stifling humidity, too, harsh rainstorms, hail and sometimes lightning—not to mention the stories that float around the course about a woman in Rio who got killed on the beach the other day by lightning. 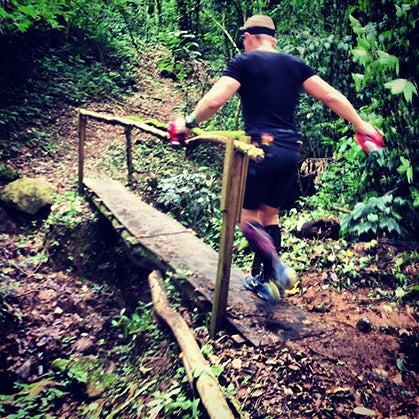 Kellie, Kevin and I go through the night visiting villages, avoiding dogs that are looking to protect their turf and maybe cash in on a scrap of food while we run/walk our way to daylight. We arrive at Bara around 3:30 a.m., where the local church is serving dinners of rice, beans, egg and beef to runners.

Somewhere between Crisolia and Ouro Fino, my energy levels are at an all-time low. My stomach is not settled and rejecting calories. Worse, I am holding back Kellie and Kevin. After battling this for situation for 12 hours, I’m unable to even walk at a good pace while weaving back and forth, battling my DNF demons. Knowing what lies ahead on the course, I announce I’m going to call it quits at mile 72.5.

Liana loads me into our van and tells me to lie down and sleep while Kevin and Kellie eye me with a sad but understanding look as they pack their supplies and hit the path. Two hours later, I wake up and Alex takes me through a pasture to get cleaned up in a stream with a waterfall (of which there are many along the course!) Once the cold water hits me, I feel rejuvenated and come back to van with determination to start running again and make it to next town.

Inconfidentes at kilometer 115 has a beautiful plaza with a wonderful “Padaria” or bread store.  I order fresh-squeezed orange juice, a café com leite (coffee with milk) and a ham-and-cheese sandwich pressed on freshly baked rolls. The sun is out—it is going to be a great day two on the Caminho da Fe!

The next three villages come and go when we hit Estiva at kilometer 175 and get our daily rain dump, except this one has hail—not fun when you don’t have a poncho packed! Note to self for next year … 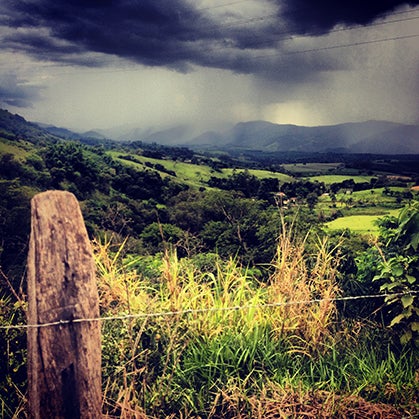 Into the night we go again. As I leave Estiva for Cosolacao—the second-to-last town at kilometer 195—I know I may catch up to Kellie if I continue strong and steady. As I come over the mountain, I see two figures walking ahead of me—one in flip-flops. It’s Billy and Kellie, who’ve been walking together again for over 22 kilometers. As I rejoin them, our spirits are flying. We walk into Consolacao and find a whole town out for a Saturday night of fun, music playing, everyone dressed up on the dirt roads and runners feeding off the energy as they come through.

The final leg of the race to Paraisópolis is 22 km or roughly a half-marathon. For most runners, it is all a blur, dragging their tired bodies over the top and then down a steep, hard descent into the town. But, at this point, everyone has only one focus—finish the freaking race!

Kellie and I cross the line at 6:30 a.m., 46 hours and 30 minutes into the race and meet Kevin there who had finish in 40 hours and 40 minutes. Our reunion is emotional. Mission accomplished—friends and family who not only survived, but also built a lifetime of memories over the two days we journeyed through the Brazilian landscape.

At the finish line party, Mario interviews the winner, Oraldo Romualdo. Romualdo sums up the beauty of the race by saying, “We are racing against ourselves and a clock, never against anyone else here. That makes this a family who wants everyone to win.”

David Green is a founder of 110%, the company known for revolutionizing compression and ice products and dedicated to providing athletes with the tools to play harder. David is also an avid endurance athlete having competed in numerous ultra events including Badwater and 16x Ironman competitions. David is thrilled to have just turned 50 so he can age up!