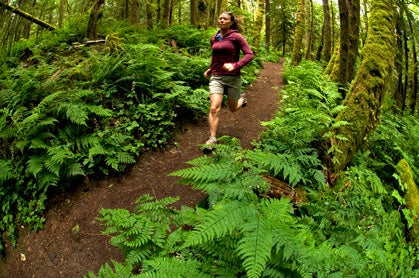 Go if you want to explore your choice of over 120 miles of trails in British Columbia’s Coast Mountains with views of Howe Sound’s forested fjords, which drain into the Strait of Georgia between the mainland and Vancouver Island. “I moved here for the amazing trail systems,” says Rich Rawling, coordinator for the Sea 2 Sky Trail Running Series. Originally settled by Coast Salish First Nations people, this town of 16,000 has boomed in recent years thanks to the forestry industry, and now tourism. Squamish is situated between the world-class ski resort of Whistler-Blackcomb and the cosmopolitan port city of Vancouver, site of the 2010 Winter Olympic Games. Drive just 40 miles north of Vancouver along the scenic Sea to Sky Highway to reach this bustling town with an increasing reputation as an outstanding mountain-biking, big-wall climbing and trail-running destination.

Race … The summer-long Sea 2 Sky Trail Running Series (s2srun.com) features seven races ranging from 5K to 100 miles at locations between Squamish and Pemberton, 60 miles to the north. The area’s greatest challenge is Stormy (stormytrailrace.ca), a 50-mile solo or relay and 100-miler, in mid-August. The run ascends from Squamish into Garibaldi Provincial Park and takes you through red-cedar forests, grassy meadows and along gurgling creeks. “This is a great starter race for those new to trail ultras—the course is visually awesome and its difficulty level is low,” says race director Wendy Montgomery.

Best Trails … The Four Lakes Trail at Alice Lake Provincial Park is a 10-mile rolling singletrack that loops around the freshwater lakes abundant with fish. Head to the Powerhouse Plunge, a downhill mountain-bike trail, for a lung-bursting ascent on foot. “Many of Squamish’s great running trails are also mountain-bike trails,” says Rawling. “But this is Canada, so there’s plenty of room for all.” The Pseudotsuga Trail (the scientific name for the conifer-tree family) takes you along steep ascents, winding switchbacks and rocky ridges. Connect the Powerhouse Plunge and Pseudotsuga into a 12-mile loop that ascends 1500 feet, or extend it up to 50 miles by adding on a number of side trails.

For an alpine extravaganza, take the Diamondhead Access Trail along Paul Ridge

Go when … Avoid the rainy season from October through January and take advantage of the summer’s (July through August) relatively dry conditions, when daytime temperatures can reach the 80s.

Best eats … Treat yourself to fantastic pizza at the Eagle’s Nest or cool off at the Howe Sound Brewing Company (howesound.com) with a pint of Diamond Head Stout or Devil’s Elbow India Pale Ale. For an early morning jolt, grab a cup of joe at the Bean Around the World (cowboycoffee.ca), a small, funky shop that serves coffee bought directly from a Guatemalan farmer.

Pitstop … Valhalla Pure Outfitters (shop.vpo.ca) is a camping and climbing shop that has trail-running gear, apparel and Squamish trail maps.