Trails abound in the outskirts of Germany’s vibrant capital city 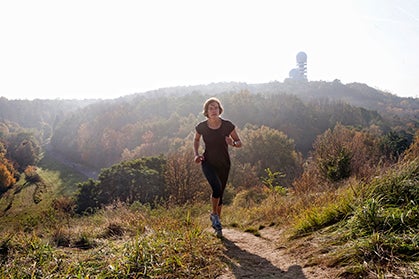 Katrin Schultze running near the Teufelsberg with the former U.S. spy station in the background. Photo by Magdalena Lepka.

The history and culture, the nightlife, the energy of a once-divided and now rapidly changing city, even the currywurst, all ensure that Berlin bustles with tourists, hipsters, dogs, strollers and traveling musicians. But the city is also lush with green space. Forests comprise approximately 18 percent of Berlin’s territory (totaling 100 square miles inside the city borders) while bodies of water, parks and farmland make up another 23 percent. Before moving to Berlin last summer, I clung to these statistics as an indicator that I could get my trail-running fix in the city.

My first Berlin run was an urban adventure along a sometimes-sidewalk, sometimes-dirt path that follows the Landwehr Canal, which connects the Upper and Lower River Spree. A friend and I skirted around one of Berlin’s many outdoor markets, dodging a man hawking stolen bicycles and then a group of 20-somethings waving political pamphlets. Continuing along a wide gravel path that parallels the Spree, we ran past the Badeschiff, a river cargo container that has been converted into a floating public swimming pool. Here, graffiti adorns warehouses, which host an indoor market and artist studios.

Arriving at Treptower Park, the city’s second-largest public park, we hopped on singletrack to enter the denser wilds of a preserve called Plaenterwald. The city dropped away. We navigated a narrow birch-lined trail and the smell of damp earth grew stronger until a dilapidated metal dinosaur leered at us through a fence. This was Spreepark, a former East German amusement park that now stands abandoned.

“Isn’t this the most amazing run ever?” my friend said, gesturing at the river to our left and the overgrown carnival to our right.

I loved the run, but I was seeking something else. 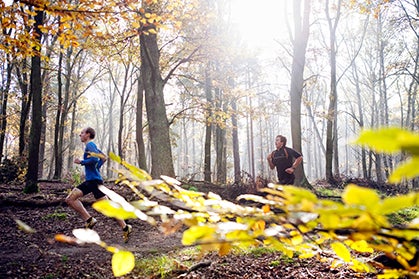 Members of the LTC Berlin Running Club completing a speed workout in the Grunewald. Photo by Magdalena Lepka.

Local trail runner and world traveler, Amanda Schuman, 31, praises Berlin for its versatile running possibilities, saying, “You can see cultural and historical sites on an in-city run, and access tons of trail running by taking a short bike, bus or subway ride.”

Indeed, a 30- to 40-minute commute from the city center brings runners to both popular and off-the-beaten-track forests and preserves. In the northern districts of Berlin, trails wind along lakes, through meadows and the Tegel Forest, around cornfields (a soothing balm for the homesick) and through nature preserves into neighboring Brandenburg.

In the east, the Mueggelsee trails feature gently rolling hills and lakeside views. Trails in the Spandau Forest are marked—a rarity in this city where public transportation is unerringly precise, but wilderness is left mysterious—and are less populated than some at the Grunewald Forest. Runners who make the one-hour commute to explore neighboring Potsdam can enjoy the varied terrain of the 66 Lakes Trail, which circles Berlin, offering views of small villages and wetlands and woodlands.

“Berlin provides runners with great contrasts—you get the city and the woods,” says Fabian Baumann, 33, who often hits trails in the northern district of Frohnau. “One of my favorite things about Berlin running is that you encounter history even when you’re running in the forest. On a wooded trail run near my house, I can cross a section of the Berlin Wall Trail and run past an abandoned watchtower.”

Hankering to check out the station and other arboreal hotspots, I hightailed it to the Grunewald, passing breakfasting Berliners at a sidewalk café. I arrived at the outskirts of the forest and took off down the first trail I saw. Instead of prescribed sights, though, I encountered a Brothers-Grimm-like density of pine and birch trees, sporadic oak and chestnut trees, bear’s garlic, picnickers and wild boar scat during my 12-mile jaunt.

On my next visit to the Grunewald, I found the Devil’s Mountain, or Teufelsberg. (Cultural translation: In swampy and sometimes sandy Berlin, a nearly imperceptible change in elevation is a hill, while a hill, as we know it, is a mountain.) Like any hill in a forest, this one is stubbornly green and verdant; its appearance conceals the fact that it is man made. The overgrowth covers rubble from buildings destroyed during World War II.

I labored up the Teufelsberg to an intelligence-gathering station that the U.S. National Security Agency erected on top of the hill during the Cold War. The station shut down operations after the fall of the Berlin Wall and now stands abandoned, a relic of another time that bears in graffiti the protests of this one. From the top, you are privy to expansive views of the city, which begins its sudden sprawl beyond the tree line in a collection of red-roofed apartments and is marked by its once-competing radio and TV towers. From this vantage, it’s impossible to ignore the metaphor implied by the height of the man-made Teufelsberg: this is a city where history literally looms.

Kristie Kachler is a teacher, writer and odd-jobber. She won a loaf of bread and a German-language running manual in the course of researching this article.