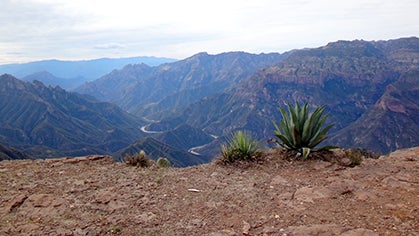 In a journal entry from the winter of 1995 during his first visit to Mexico’s Batopilas and Urique canyons, Micah True—better known as “Caballo Blanco” in Christopher McDougall’s book, Born to Run—wrote the following words:

“The views of the Canyons were remarkable—like nothing I’ve ever seen—indescribable as the spirit fueled me on for six hours of running. As I ran higher, it got cooler with pine trees and the trail became real steep and rocky. I passed a Mexican on a beautiful white horse. We stayed together, his white horse and the man named White Horse, and The Rider, who was curious and at first suspicious about me. After a couple of miles, he took a liking to me and said, “This is a damn good horse, and you are as strong as my horse.” I didn’t say anything until he asked me my name. “Caballo Blanco? Como El?”

When we reached the mountain pass, he invited me to his ranch. I politely declined, hurried on top of the mountain to marvel at the views, then returned the way I came. The Horseman said that the mountain ridge wasn’t quite halfway down to Urique, following the river upstream a few miles. After only having a few words, it was hard to believe that some of these remote country folks had heard of me. Unreal. I have never been near this area until a week ago. Mañana, I expect I’m going to be fairly trashed. We’ll see.”

Throughout the years, Prospero Torres, The Rider from the story, became one of Micah’s supporters and a close friend. As a trail guide, Micah would often take international travelers throughout the Sierra Madre, and would camp at Prospero’s ranch, Los Alisos, where he would provide pack burro support for Micah’s clients. The ranch is the gateway between the two Canyons of Urique and Batopilas.

Panoramic from the trail. Photo by Francois Bordeau.

Micah and Prospero shared a vision of encouraging the Tarahumara, or Raramuri, people to keep running free and to continue their age-old traditions as “the running people.” In 2002, Micah created the inaugural Copper Canyon Ultra Marathon (renamed the Ultra Maratón Caballo Blanco after his death in 2012), a rugged route between Urique and Batopilas.

Unfortunately, the original race course was plagued for several years by a local bandit who would assault and rob travelers along the trail. Though the Bandito was eventually arrested, locals became afraid to hike or run there anymore. The government also no longer offered compensation for trail maintenance on the route. Micah—concerned about the safety of the Raramuri and participants in his race—relocated the race to trails around Urique, where it continues today.

Last February, Prospero and his team constructed a permanent shrine for Caballo Blanco, with personal mementos and photographs of their shared dreams. The shrine is more than a memorial. It has become a new symbol of Prospero’s vision and the seal of a new partnership with Norawas de Raramuri, (“Friends of the Running People”), the non-profit organization his friend Caballo Blanco helped create in 2009.

Norawas is a US-based nonprofit that supports Raramuri participation in local and international foot races by providing maize, non-GMO seed corn and cash awards for participating Raramuri runners, men and women alike. Together with Prospero, they are reviving the original course of the very first Copper Canyons Ultra Marathon, creating a world-class trail for international adventurers and reopening a vital link for locals between the canyons of Urique and Batopilas.

While the Ultra Maratón Caballo Blanco itself will remain on local trails around Urique, the original route—the Caballo Blanco Trail—is being restored for the year-round enjoyment and benefit of locals and travelers alike. 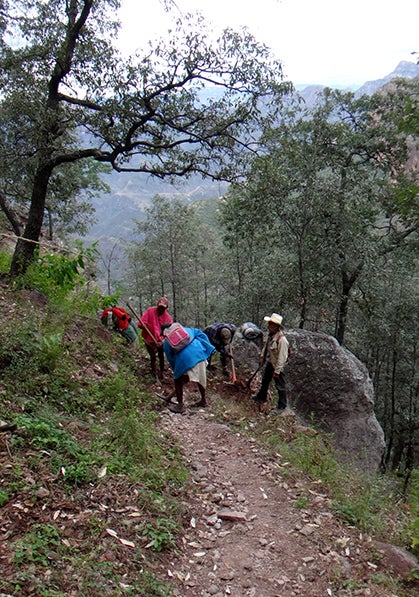 Like many Raramuri, Prospero is a man of few words. But, a year ago, sitting with Norawas board members in his ranch of Los Alisos, he very eloquently explained his idea of reopening the legendary route, honoring his friend’s memory and reconnecting two canyons. If we could help, he said, this would be both a great adventure tourism project and a powerful symbol that the Raramuri culture, with its tradition of traveling by foot, was alive and well.

With the help of the Mas Locos (a term coined by Micah to describe the “crazy people” who came to run his race) and donations from around the world, Norawas gathered the funds and launched the project in December 2013. The trail is rugged and steep, very rocky—just as Micah’s diary described it. From the Los Alisos ranch, the trail shoots up the canyon walls and follows ancient footpaths all the way to the very top, at a scenic point called Mesa Isidros. There, with the high summit winds weaving through the trees, adventure runners and Raramuris alike can contemplate the sheer magnificence of the Urique Canyon, hundreds of miles of breathtaking scenery.

{youtube}PzRMK714SIY|390|220{/youtube}
A short video of author Francois Bourdeau following Prospero Torres up a stretch of the new trail.

The canyon rocks are formed from past centuries of erupting volcanoes, which threw lava and ash throughout the surrounding plateau. The terrain is extremely rugged and wild, with brushwood and dried mesquite along the way. The pathway, a mixture of white, slate rocks and boulders, black stones, and rich, red-clay dirt, winds among forests of pine, fir, alder, juniper and pinon.

Along the flowing riverbeds, the stones beneath are opaque, the colors of steel and rose. As the sun rises, the canyon walls leading down the mountain ranch of Los Alisos and into Urique become a beaming mirror of intense heat. Live vegetation is abundant throughout the year, with over 400 wild, medicinal plants flourishing throughout the Sierra Madre. Many canyon ranchers harvest corn, grapefruit, avocados, oranges, lemons, limes and coffee.

Every step of the way, Prospero has had local people participate in the design of the trail. As the first phase comes to a close, the renovated stretch of the Caballo Blanco trail covers around 12 to 14 miles of canyon footpaths, from the bridge of La Laja (six miles from Urique) all the way to the top of the Copper Canyons, at Manzano. This segment alone offers 6,300 feet of elevation gain.

The group hopes to have the entire trail renovation project—from Urique to Batopilas—complete by 2015.

“I’m a little lost I suppose, and running out of water. But, on the downhill there is a little place in three more hours, a little shelter for campers, with a beautiful overlook of the Urique Canyons below. After awhile I ran into the ranch in the middle of nowhere, of the high mountain mesa. The Tarahumara woman gave me tortillas, beans, pinole, grapefruit and water. Her husband showed me the beginning of the little trail that descends even further. I run with the Tarahumara, just when I needed it the most. This is a time in my life when I need their spirit the most, to guide me, the Great Spirit, and my little helper spirit; my Caballo Blanco. I need their love and trust the most. Let me find the way in life to remember their ways of freedom. I move with an open heart. I move with love. Let me be worthy. Let us be Warriors as slow we will not be. Let us move through fear, so we may be free.”
–Micah True’s journal entry, February 24, 1995, Los Alisos Ranch, Chihuahua, Mexico

Getting to Urique
Most travelers fly or use ground transport (trains and/or intercity buses) to reach Urique from one of two main travel hubs—Chihuahua City or Los Mochis/El Fuerte. Some opt to fly to El Paso and take grand transport from there.

It is also possible to drive into Urique—roughly 12 hours from Los Mochis or 8 hours from Chihuahua. A vehicle with good brakes and high ground clearance is recommended.

Experiencing the Caballo Blanco Trail
Travelers can make arrangements with Urique’s Office of Tourism by contacting Cecy Villalobos at (635) 108-9447 or cecy.villalobos20@gmail.com. Local guide services and pack animals can be hired through Prospero Torres, who employs traditional Raramuri runners as hiking, camping or running guides. 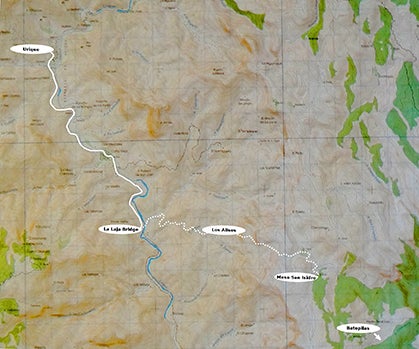 Original map by Inegi, modified to show route of the Caballo Blanco Trail. Click to enlarge in a new window.

Maria Walton is the President/Chair of Norawas de Raramuri. Francois Bourdeau is a member of the Norawas board.