Q&A with Christine Hägglund, named Swedish Adventurer of the Year, on her unsupported run across Sweden 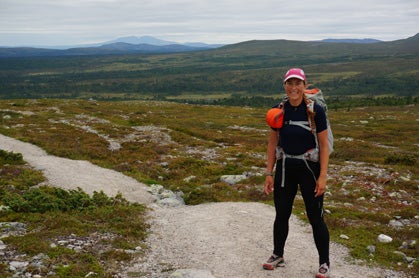 Editor’s Note: This is the second installment of a mini-series on trailrunnermag.com about women running multi-day adventures on the trails. See part I, a Q&A with Jo Meek, here.

On August 8, 2013, Christine Hägglund reached the 1,300 kilometer mark. She had just finished running the 807 miles from Treriksröset to Grövelsjön in Sweden, completely unsupported, in 39 days. The 42-year-old mother of three—ages 6, 8 and 10—decided to finally put her dreams into action, traversing sandy trails, barren chaparral and expansive meadows, all against the backdrop of Swedish fells.

On the way back from a triathlon training camp last year with her husband, Pär, “We started talking about what we wanted to do with our lives,” says Hägglund, an entrepreneur and motivational speaker, “and I brought up the idea [of running across Sweden]. He said, ‘You know, we have no idea, in 10 years from now we’ll have three teenagers at home and you may not have the physics to make it. Why don’t you just go this summer?’” Hägglund started planning immediately, and on July 1, 2013, she began her trip.

Hägglund is no stranger to dreaming big—and completing her goals. For their honeymoon, she and Pär biked Iceland. “It took us 22 days to go from Reykjavik to Akureyri in the north, back down through Vestmanneyar in the south, and returning to the capital again,” says Hägglund. The couple had known each other in university, but it wasn’t until they returned to their hometown that they realized they had a connection and wanted to leave the city—and moved away together. Even their eldest daughter’s first word was “tyr,” the Swedish word for “äventyr,” meaning adventure.

Hägglund thanks her active family life, both growing up and now, for her running capabilities and outdoor interests.

“We spent time in the mountains and in the woods a lot when I was little,” she says. “My parents loved picking berries, especially cloudberries, where you have to walk through swamps for a full day to fill up your buckets.” 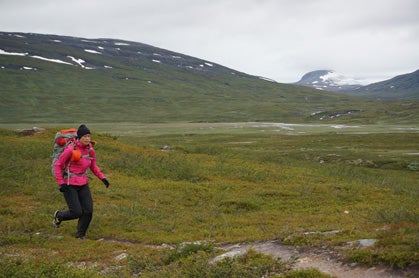 Hägglund’s weekly training now includes cross country skiing, alpine skiing, telemarking, skating, trail running, mountain biking, road biking, yoga, strength training, swimming, horse back riding, and doing squats with her kids on her back. “They just love it,” she says, “and I think one reason why I’m seldom injured is because I mix my activity up so much.”

While her kids love to join in on her adventures, Hägglund is often asked how she can spend so much time away from her family. Writing her blog this past summer, she explains, let the kids keep track of where she was and what she was doing.  “We talked about how important the trip was for me and then we talked about what was important to them. I tried to fulfill some of their adventure dreams once I was back home,” Hägglund explains. Her children’s dreams include horseback riding across Iceland, biking in Sweden’s mountains and skiing, all of which the family plans on doing this year. “They just want to go on an adventure with Pär and me. I guess that’s what all children wish for now and then—to do something exciting with full attention and presence from their parents.”

In 2009, Hägglund led her family—including her kids—on a 24-country drive, spending more than 100 nights in tents. More recently, her adventurous nature has taken her running the Atlas Mountains of Morocco and Gran Canaria, in Spain as vacation time with friends.

Following her 1,300-kilometer run across Sweden, Hägglund received the award for Swedish Adventurer of the Year, awarded by a jury of people in the outdoor industry, including editors, tourism representatives, doctors and athletes. Past winners have included Ola Skinnarmo, for sailing the northeast passage of Russia and Andreas Fransson, who climbed Denali and skied down its southern slope.  Her win, said jurors, was because of the way in which she had “built a bridge between a classic adventure and athleticism.”

“My husband says that I’m a precious bird that he doesn’t want to hold too hard,” Hägglund says. “I need to fly freely and he knows I always come home, usually much more happy.” 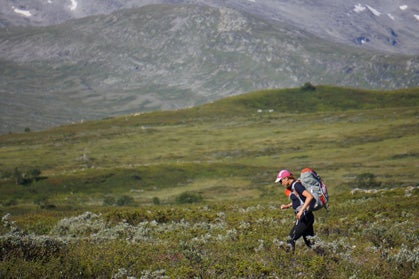 Q & A with Christine

What did you carry with you during your 39-day unsupported run?
I had a very good plan and knew exactly where I could restock food. In the beginning, I had seven days when I would not be able to buy any food, so my pack weighed about 14 kilograms, (roughly 30 pounds). I knew I could buy food in the mountain huts. During the last week, I was able to buy food every 15 kilometers, and I didn’t have to carry more than some safety food. Other gear essentials included a sleeping bag and pad, a compass, map, and a small portable stove. I also had a camera, cell phone, journal and even a crossword magazine, for long and lonely nights. There’s a list on my blog.

How far did you run each day?
I averaged around 35 kilometers a day. I didn’t want to push myself too hard. I wanted to make sure that my body would make it the whole way.

What did you eat?
For the first weeks I ate freeze-dried food, but after a while I had a hard time swallowing it. So I switched to making my own oatmeal mixes, with fruit, powdered milk and some nuts. I’d just boil water and mix. When I passed a village with a small supermarket, I would buy so much food and just eat for all the hours I was there.

Did you come into contact with anyone during your trip?
There were days when I didn’t meet any people and there were days when I came to villages or huts and met many other hikers. I had a friend join me for two days. I was passing my hometown, so she took the train up and ran with me. We slept in my little one-person tent that night, just giggling and talking. It was so great, after having been alone so much, to have someone to share all the good and bad times with.

Did you struggle with being away from your family for so long?
I felt a bit like I went in to my own country of Narnia, like I had my own time, my own world, that wasn’t connected to the world outside. I didn’t feel lonely many times but talking with my family on the phone sometimes made me miss them. I called home from one place and wanted to talk to my youngest daughter. She said she didn’t have time and that we’d see each other in six weeks. But wait, I said, there are only four weeks left. She said, “OK, four weeks then. By the way, Grandma’s oatmeal tastes much better than yours, because she lets me have sugar on it.” And then I knew I didn’t have to worry.

Do you have any upcoming adventures on the horizon?
Together with a good friend, I’m planning on doing a 110-kilometer swim in a river between Åre and Östersund in Northern Sweden. The waters are cold and dark, so we’re hoping to finish it in six days, sleeping in tents on the way. It requires a little more logistics than my other trips as we’ll need a safety team around us, but we’re having so much fun just planning it. I’m sure we’ll have even more fun doing it.