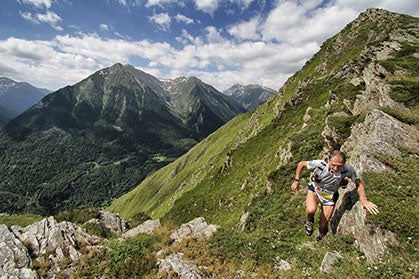 Ed.’s note: Day dreaming never goes out of style, so we decided this roundup of bucket-list stage races, published last year, was worth revisiting. We have updated it with correct dates for 2016 (and in some cases 2017). Enjoy!

Your local trails may hold enough adventure for most weeks. But every so often you need to break out of the routine and explore the vast wilds of our planet by climbing alongside glacial moraines in Iceland, running past camels at aid stations, navigating steep Himalayan trails or sand-skiing barefoot down the backside of the world’s largest sand dune.

Multi-day stage races are a great way for newbies and competitive trail runners alike to experience such dramatic running adventures in exotic locales, with more support and camaraderie than solo backcountry ventures offer.

Here are nine scenic—and adventurous—destination stage races to put on your bucket list. 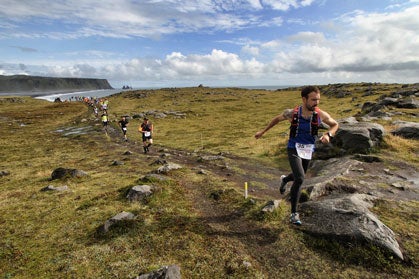 The RunIceland Adventure Trail stage race captures the diversity of the 40,000-square-mile “geologic chocolate shop” that is Iceland, in five (relatively) short stages. From the artistic, energetic city of Reykjavik, racers travel by way of vintage bus into remote, otherworldly country (think Mars). The race itself starts at the base of the Vatnajokull Glacier, with an unapologetically tough climb up the moraine.

The views atop the glacier are surreal, but subsequent steep, technical descents keep even the most agile-footed runners looking squarely at their feet. Later stages cross the southwest region of the island, passing rocky sea cliffs, enormous waterfalls and long stretches of volcanic beach. Push on through climbs, river crossings and crater-ridge traverses to enjoy the rewarding hot spring just beyond the finish line. 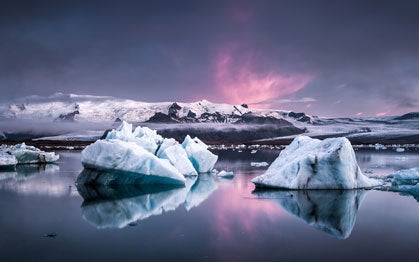 During off hours, you can join organized excursions to glacial lagoons, giant tectonic plate fissures and thermal pools. If you’re lucky, you might even catch a glimpse of the famous aurora borealis, or northern lights. But the final test of endurance is measuring your nightlife stamina against that of the Icelanders. Or, the gastronomically brave can try “Hakarl,” a cured rotten-shark recipe that goes back to Viking times. If you can down it without a shot of Black Death schnapps, you’ll definitely impress the locals. 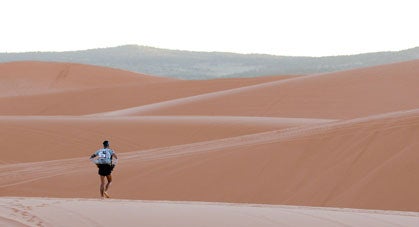 Courtesy of Grand to Grand Ultra

This seven-day, self-supported event crosses some of the most beautiful desertscapes of Utah and Arizona. The race embarks from a remote spot along the North Rim of the Grand Canyon, and encompasses dunes, hard-packed sand, forest trails, slot canyons and mesas. The course, which covers about a marathon a day (with the longest stage at 50 miles), is home to wildlife such as bighorn sheep and the endangered California condor. 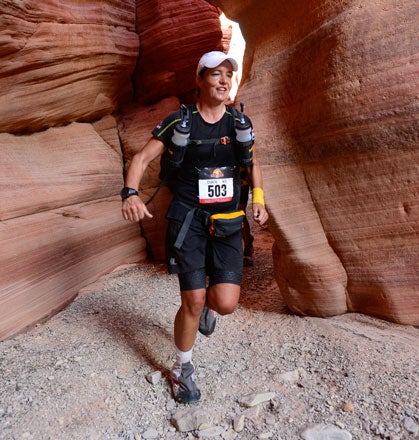 Grand to Grand is a study in contrasts. Throughout the course, runners don’t just run, but scale dunes, climb rock ladders and rope through labyrinthine slot canyons to get to the high point, the finish at the Grand Staircase in Utah. The most jarring change of pace, though, is going from the austere, rugged desert to the post-race celebrations in Las Vegas.

A new stage race in old Baja California, Carrera de Baja embarks from the quaint Mexican fishing town of Loreto, and showcases the historical charm of the region.

The first leg, a rolling half marathon, starts at an old monastery near the southernmost tip of the original Camino Real, a route that once linked the Christian missions on the Baja Peninsula, then proceeds along rocky trails and river crossings. 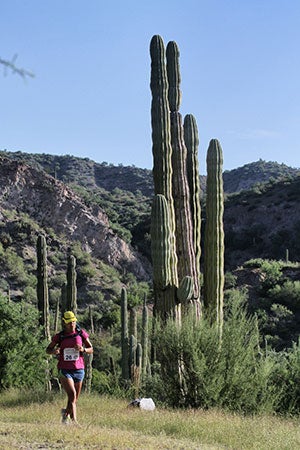 A runner during Carrera de Baja passes one of the giant cacti that line the course. Photo by Dino Bonelli

The terrain’s technicality and variability build with each stage, and racers eventually brush up against towering cardon cacti, rope their way through a river slot and glissade down a sizable sand dune. The heat is an added challenge, the waist-deep river crossings a welcome break.

On the fourth day, racers are boated off the mainland to race through the rippled dunes of Magdalena Island. On the following day, if you can handle the rocky scrambles and steep climbs of the final stage, you’ll be rewarded with magnificent panoramic views of the Sea of Cortez.

When not racing, make excursions to secluded islands or swim with the coastal wildlife. Catching the sunrise from your oceanfront abode each day isn’t so bad either. 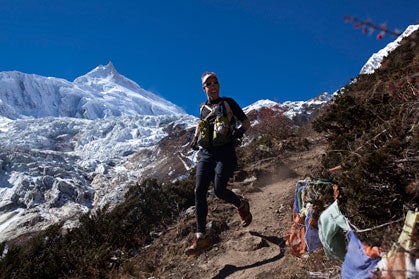 Race organizers pick you up on your arrival in Kathmandu, and take you from the chaos of the city to the stark beauty of the Himalayan backcountry. Starting from a mild and richly vegetated elevation of about 2,000 feet, the race initially runs along the Gandaki river, passing villages and rice paddies, and climbs steadily to the beautiful monastery of Lho, during stage four, set against the majestic backdrop of Manaslu. 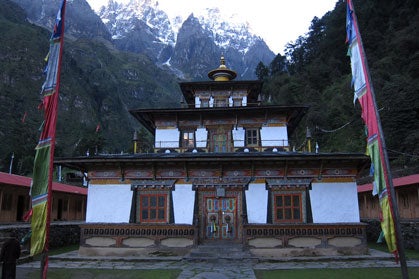 The Lho monastery, with Manaslu in the background. Photo courtesy of Manaslu Mountain Trail

At this point, the altitude becomes an obvious challenge, if it hasn’t already. Each stage ascends toward Manaslu, topping out at around 16,700 feet, before starting the descent.

Cultural interactions come in many forms during the race, from yak caravans to donkey drivers on bridges to groups of enthusiastic schoolchildren.  Remember to pass prayer flags to the left, and don’t be shy with your “namaste” greeting.

The April earthquake in Nepal has affected the area, but not as much as in other parts of the country. Race organizers are reviewing the route and potential logistical challenges. 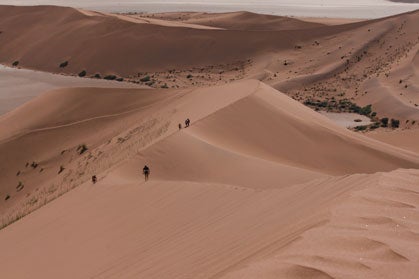 At more than 55 million years old, the coastal Namib Desert is one of the oldest deserts in the world. It’s also home to the so-called Crazy Dune, reported to be the highest sand dune in the world, at around 1,000 feet.

100km of Namib Desert—a small event with no more than 30 runners—embraces the remote wonders of the region. It begins with a gorgeous 11K at sunset along the sandy trails of the dune-encircled Sossusvlei salt pan, just beyond the bungalow village where racers stay the night. Safari-car transfers between stages offer a chance to glimpse desert wildlife, and each leg of the race seems as exotic as the previous, ranging from the deep sandstone Sesriem canyon to the rolling dunes of later stages. 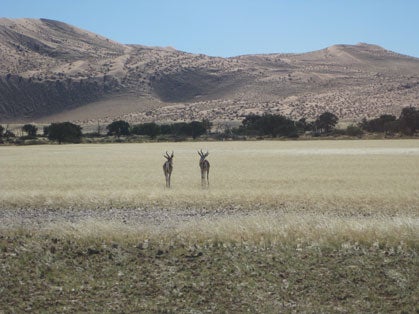 The front of the pack. Courtesy of 100km of Namib Desert

By far, the final stage seems the most surreal. Ascending the sandy spine of Crazy Dune feels as momentous as climbing a mountain crest in Nepal—plus you get to sand-ski down the back of the dune to its base. Save a bit in your quads to enjoy that final push on Deadvlei, or “dead marsh,” a white-clay pan filled with the ancient, skeletal remains of acacia trees.

Post-race excursion options are many: check out the sweeping desert landscapes and nearly inaccessible seaside cliffs of Skeleton Coast National Park, or take a hot-air-balloon flight over the dunes.

This 13-year-old race is a five-stage running tour of the diverse volcanic terrain of Sicily, the largest island in the Mediterranean, and its satellite islands. The event, capped at 50 participants, has an intimate feel, and hydrofoil transits to the start of each stage add to the adventure.

The first three stages take place in the Aeolian Archipelago, north of Sicily, hopping between volcanic islands with black-sand beaches and craggy crater ridgelines. The final two stages climb, sometimes through cloud, to the iconic summits of 10,922-foot Mount Etna, the tallest active volcano on the continent, and contain the majority of the race’s 20,000 feet of gain. The effort is worth it, though, for the panoramic views of the Mediterranean.

If gorgeous scenery and epic climbs aren’t enough, you can opt for a mud bath on the island of Vulcano, north of Sicily, or a post-race steam. After, indulge in a local specialty, sea urchin. Sicilians are also masters of fried food—and after five days and 80K, you’ll have earned yourself a little golden-brown goodness. 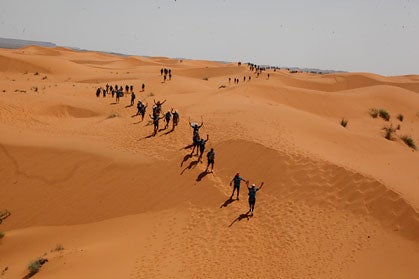 Since its inaugural race in 1984, the self-supported Marathon des Sables (commonly abbreviated as MdS) has grown into the international stage-racing circuit’s premier event.

Set in the beautiful, remote Moroccan Sahara, the race is an epic, yearly migration across the desert—1,330 individuals started in 2015. Over the course of six days, runners trek across wadis, or washes, over sandstone plateaus, up and down rocky peaks and soft sand dunes, and across ancient, dried-up lakes. The majority of the race is fairly flat, though some years have seen more technical climbs.

MdS is an exercise in self-sufficiency and discipline. Upon their arrival in country, two days prior to the start, runners receive their race guide, known as the “MdS bible,” which outlines stage distances and terrain; the course changes every year. The only supplies provided are a two-sided Berber tent and nine liters of water a day; racers carry everything else on their backs.

This event scores highly on the camaraderie and personality scale: Runners, many of them internationally renowned, set off to the percussive rhythms of AC/DC’s “Highway to Hell” and finish the race, at the foot of the Merzouga Dunes, to the melodies of French opera. 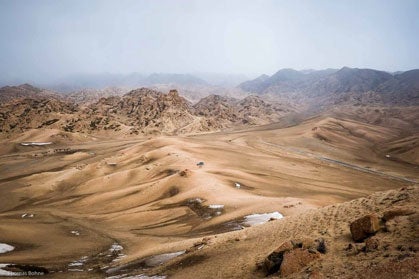 The Gobi March, part of Racing the Planet’s 4 Deserts series, is a self-supported footrace across one of the most stunning and culturally rich regions of China, the Hami region of Eastern Xinjiang province. 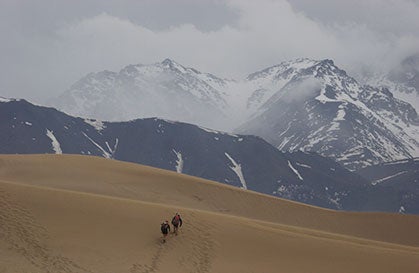 With 7,800 feet of gain and 12,100 feet of loss, the course crosses a variety of environments: high pastures where horses graze, camel-tracked sand dunes, vast plains of black sand filled with wind-shaped rock formations.

Aside from a local team of camp staff who represent a variety of ethnicities, subsistence farmers from the area come to spectate the event. 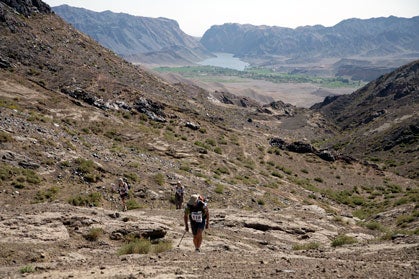 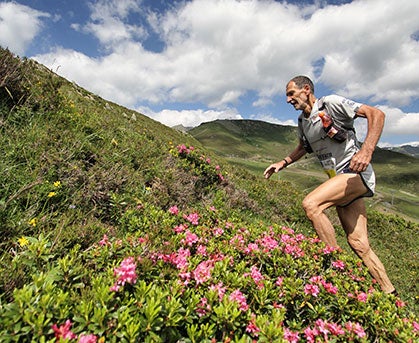 Stop and smell the wildflowers … if you’re not too distracted by your screaming calves. Photo courtesy of French Pyrenees Patou Trail

[Ed.’s note: The race website does not seem to have been updated since last year, so it’s unclear whether this event is still taking place]

“Steep” doesn’t do this race justice. With almost 20,000 feet of cumulative elevation gain, the 100-kilometer French Pyrenees Patou Trail demands fancy footwork and finesse on technical, steep terrain—but it rewards participants with a fine selection of cheese and wine just beyond the finish line. Sounds about right for a French stage race.

The event explores the Pyrenees, a range older than the Alps that forms the natural border between France and Spain, and mixes touristic fun with punishingly steep climbs. The second stage is a 10K jaunt to an ancient Spanish village, Ainsa, with an old fortress and authentic tapas. Two days later, racers participate in a competitive nighttime vertical K stage—1,000 meters of gain in five kilometers—that finishes at a ski resort. The race is capped off by a 45K “sky marathon” stage that climbs 3,300 meters (10,827 feet), passing the secluded lakes and valleys of Pyrenees National Park. 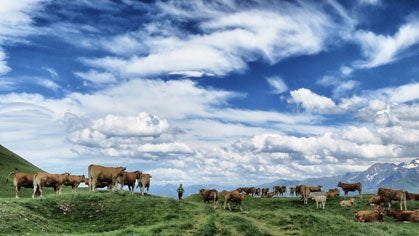 With shorter relay options, rafting adventures and cheese- and cider-factory tours, this event caters to those who want to travel with the whole family. You can even request pickup at the airport.