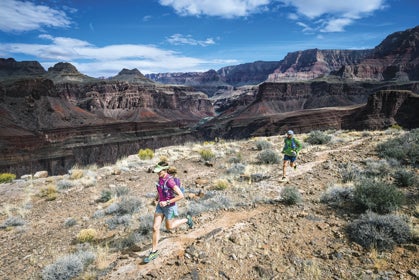 Rob Krar and Christina Bauer run next to a big dropoff on the Tonto Trail above Hance Rapid. Photos by Ken Etzel.

AT THE WATER’S EDGE

As I stumbled to the shoreline and collapsed next to the thundering Hermit Rapid, I took stock of my body, contemplating its ability to withstand our daunting return to the rim. We had just descended 8.9 miles following the steep, rough and remote Hermit Trail, dropping a staggering 4200 feet of elevation, rim to river. My friends for this adventure, John Doskicz, 40, of Flagstaff, Arizona, who owns Flagstaff Climbing Center, and Matt Kelly, also of Flagstaff, were used to this kind of travel. I was not. This was my first trip running in the Grand Canyon backcountry.

I inhaled an energy bar and guzzled water, allowing the breeze to cool my beet-red face. I craned my neck toward the Arizona sky and scanned the almost 40 layers of sedimentary rock towering above us, stacked river to rim. I contemplated the geologic history dating back some two billion years, while the rock exploded in kaleidoscopic layers as sunrays broke through afternoon clouds.

Suddenly, the breeze brushing my cheeks turned into a howling wind, swirling sand high into the air, pounding us with sheets of icy rain. The canyon was telling us it was time to go.

The same narrow confines we used to access this rocky beach would be our retreat. With visions of flash-flood carnage we packed up and began running back up the canyon. 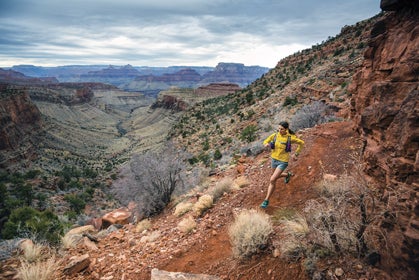 Bauer strides back to the rim along the aptly named Grand View Trail. Photo by Ken Etzel.

Located in Northern Arizona, the mighty Grand Canyon, one of the Seven Natural Wonders of the World, began over 17 million years ago when the Colorado River carved its way through the Colorado Plateau, reaching depths up to a mile. The deepest rocks date back to the Precambrian time, the earliest of geologic ages.

Grand Canyon National Park, formed in 1919, encompasses roughly one million acres and can be reached via the pine-, fir- and aspen-studded 7000-foot South and 8000-foot North rims. The remote North Rim offers few amenities and is far overshadowed by the more easily accessed South Rim, only an hour drive from Interstate 40 in Arizona. The South Rim offers dozens of viewpoints along 30 miles of scenic rim road, and urban amenities abound at Grand Canyon Village with shuttle-bus, hotel, camping and food options. Most interesting to the backcountry runner are the many easily accessible trailheads that drop from the developed rim, leading down to hundreds of secluded inner-canyon miles.

The famous Rim-to-Rim (R2R) routes, or “Corridor Trails,” follow the well-maintained and regularly patrolled Bright Angel and South and North Kaibab trails, the only trails connecting the south to north sides. As a result, these main arteries have become the key attraction for not only runners in the canyon but also the majority of day hikers, backpackers and mule trains as well.

Beyond the Corridor Trails, however, are a lifetime’s worth of rarely trod miles. “You can run some of the backcountry trails and never see a single person,” says Adam Gifford, 38, of Sedona, Arizona, and owner of the Sedona Running Company. “It is a very freeing experience, although it can also be scary, knowing that there is no one around to help if something goes wrong.” 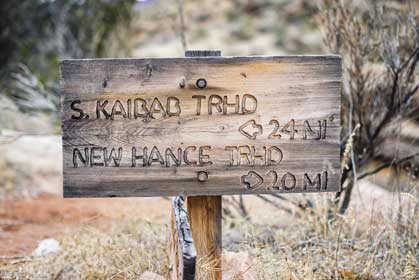 It’s a long way to anywhere. Photo by Ken Etzel.

THE PIONEERS OF FAST AND FAR

Running Wild, by Grand Canyon backcountry ultrarunning pioneer John Annerino, of Tucson, Arizona, is mandatory reading for the aspiring Grand Canyon runner. The book chronicles Annerino’s landmark running of the late 1970s to early ’80s, including traversing the entire inner canyon—well in excess of 100 miles—three times, the first runner to do so.

Before the age of the internet, Annerino was left to conjure up his own routes, based on a mix of ancient Native American pathways and Grand Canyon National Park trails, and using a simple rucksack for food and gear, and leather bota bags for water.

If Annerino was the pioneer of going far in the canyon backcountry, Allyn Cureton, 78, of Williams, Arizona, was the pioneer of running fast. Cureton coincidentally ran in the canyon concurrently with Annerino, yet each pursued his own “flavor” of backcountry travel. “[Cureton] did some incredible [undocumented] backcountry speed runs back in the day to many less-traveled places in the Canyon,” says Mathieu Brown, 37, of Prescott, Arizona, who works in Adventure Education at Prescott College.

Cureton’s fastest times in the backcountry may have fallen between the cracks of the canyon but his fastest times on the Corridor Trails did not. He is best known for his 1981 fastest known time (FKT) of 3:06:45 on the now-popular 21-mile North Kaibab-South Kaibab Rim-to-Rim (R2R) run. The record stood for 30 long years. Rob Krar, 36, of Flagstaff, Arizona holds the current FKT, set in 2012, of 2:51:28. Cureton also set the 43-mile Rim-to-Rim-to-Rim (R2R2R) record, in 1981, and held it for 25 years at 7:51:23. On May 11, Krar struck again, smashing Dakota Jones’s 2011 record (6:53:38) by 32 minutes with a time of 6:21:47. With today’s growing fascination with the Corridor Routes and their FKTs, backcountry running lore—apart from Annerino’s long-distance recounting and whispers of Cureton’s undocumented speed records long ago—seems to have been pushed into obscurity.

One doesn’t need to look any further than the Fastest Known Times website—a kind of melting pot for documenting records of non-race trails and routes across the world—to see the pages of posts related specifically to the Rim-to-Rim routes and the meager number of posts devoted to the canyon backcountry. Peter Bakwin, the site moderator from Boulder, Colorado, says, “There are many, many other great routes in the Grand Canyon! Who’s going to claim a record?” So far, his challenge has not been met. 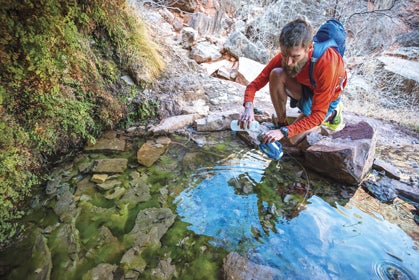 Krar fills up at Pilot Springs. Photo by Ken Etzel.

“It’s important to know the place, and make sure the timing and conditions are right,” says Brown. “A successful trip involves acute decision making and knowledge of the terrain, water sources, routes, weather, etc.”

With a 4500-foot elevation change on any given trail, from pine, fir and aspen forests at 7000 feet to cactus desert as low as 2500 feet, there is a lot to prepare for. Pack a first-aid kit, emergency blanket, personal location beacon (PLB), water purifier, GPS, topographical trail map, sunscreen and extra clothes, food and water.

Stepping up the difficulty, check out the Hermit/Tonto/Boucher Loop, for a rugged 22-mile loop. After descending the Hermit Trail, visit the oasis of Hermit Creek, then pick up the Tonto heading west, passing one of the best views of the steep-walled inner gorge where the Colorado River cuts a long straight path, a rare view in this winding canyon. Also see commanding views of the unique rock formations in Travertine Canyon from exposed benches along the Tonto Trail. Finish by ascending the Boucher, one of the steepest and most exposed trails in the canyon. Numerous rest breaks are mandatory to catch your breath and soak in in the endless views of deep side canyons and layered buttes in this complex section of the canyon.

For those looking to get really out there, Gifford recommends his favorite loop, the remote and dry 32-mile Escalante Route. “The route isn’t even shown on most maps, and I have only seen two online reports,” he says. “You will likely not see another person on the entire run.

“My most memorable moment on the Escalante was suffering from serious dehydration,” he adds. “It was August, and I quickly drained my 70-ounce reservoir. We eventually stumbled down to a beach on the Colorado River and were able to refill. That was the muddiest and best-tasting water I have ever had.”

In the west end of the park lies another wild Grand Canyon classic—the 35-mile Royal Arches Loop, guarded by almost 30 miles of rough dirt road. Once on trail, be ready for more tough travel including route finding and a mandatory short rappel. Your hard work will be rewarded with a visit to the famous Elves Chasm, a beautiful grotto complete with an idyllic waterfall, ferns and moss, and the spectacular Royal Arch, the Grand Canyon’s largest natural rock bridge.

BACK TO THE RIM

During that first trip of mine into the Grand, the storm subsided, and we survived the lower-canyon confines. The sun even made a surprise evening visit, as I winced up the rock steps to the rim, struggling to keep my friends in sight. The pain was mitigated by views of the sunset casting shadows on the stratified mesas, buttes and walls. My ego had been wiped away by the canyon, and even though I was destroyed, or because of it, I wanted to go right back in and explore more of it … all of it. 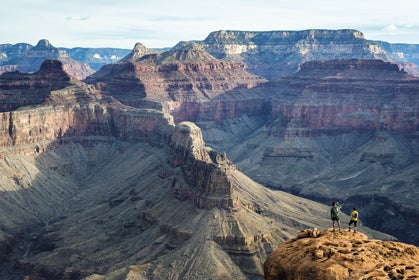 The author and Ashley Maryn take in the sunrise on the Boucher Trail before descending a steep, rocky section to the Tonto Trail. Photo by Ken Etzel.

Best Season to Go
Fall and spring are best. Spring offers the best chance for water below the rim. Winter can be cold and snowy near the rim; summer is dangerously hot and water sources can be unreliable.

Camping and Accommodations
Find camping and hotels in Grand Canyon National Park and just outside the south entrance at Tusayan. Flagstaff, one hour drive south, is stacked with hotels and camping. Act quickly; reservations fill early.

Refuel
Grand Canyon Village has grocery and a few sit-down eatery options although limited. Treat yourself to a nice meal and view at El Tovar. Other limited options can be found in Tusayan, bordering the South Entrance. Head one hour south to Flagstaff to check out Flagstaff Brewing Co. in historic downtown for local music, food and beer, or explore the many other great food and brewery options within walking distance.

Trail Etiquette
Always step to the side of the trail for mules. Be courteous to hikers and backcountry rangers. Don’t cut switchbacks. Pack out all trash.

Trailhead Access
National Park shuttle bus, taxi and personal car may be used to access trails. Plan ahead and check the Grand Canyon National Park official website for shuttle-bus availability. Many loop trails have multiple access points, may be complicated to shuttle or have no shuttle service.

TOP TRAILS OF THE GRAND CANYON