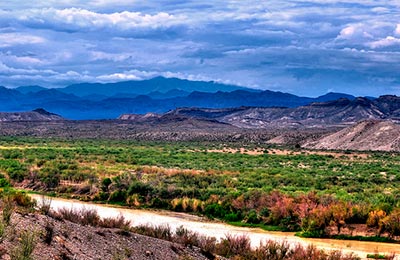 If you’re a trail runner from the colder climes, you’ve probably felt a degree of winter doldrums at some point. The weather’s cold and wet, all your favorite trails are mucky with slush, it’s dark when you get to work and dark by the time you leave … why bother running, or going outside, or doing anything at all?

Maybe it’s time to plan ahead for a mid-winter pick-me-up in the form of a trail-running vacation. These five U.S. destinations feature great winter weather, miles of trails and, perhaps most importantly, enough fun non-running activities that you can convince the whole family to get on board. 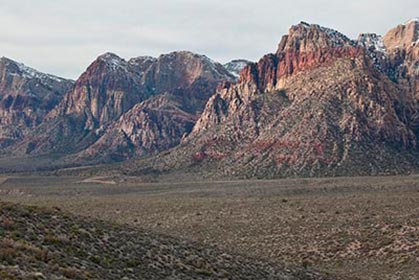 A trip to Sin City doesn’t have to be about gambling, drinking and other things that happen and should probably stay there. With its proximity to Red Rock National Conservation Area, Lake Mead National Recreation Area and other public lands, Vegas is a trail runner’s jackpot.

While temps routinely hit 100 in the summer, the winter months, with daytime highs in the 50s and 60s, offer ideal weather for exploring striking sandstone formations, subalpine forests and rugged peaks. “When everyone back East is under snow our trails are still clear and runnable,” says Molly Sheridan, an area ultrarunner and owner of the race management company Desert Sky Adventures. “There is never a day that you can’t get out and run.”

>What: Dirt by day, glitz and glamour by night.

>When: Winter weather in the Mojave is cool and dry. Average daytime highs are in the 50s during December and January and the 60s in November and February.

>Things to do: Vegas, baby!

>Post-adventure recovery: Rachel’s Kitchen, with six locations in the Vegas area, offers healthy, reasonably priced fare with vegan options. Accommodation is abundant in Vegas, with everything from cheap hostels to megaresorts on the Strip.

For a more rugged, alpine feel, head to Spring Mountains National Recreation Area, also known as Mount Charleston, 40 minutes west of downtown Vegas. The 15-mile, point-to-point Bonanza Trail lies at elevations ranging from 7,500 feet to above 10,000 feet, and passes through groves of aspens, ponderosas and bristlecone pines. (The Spring Mountains do get snow in the winter, so check conditions before committing. Or bring skis.)

>Destination Race: November’s Trails of Glory 8K, 12K, Half Marathon, 30K and Marathon, is held in the shadow of Red Rock Canyon. 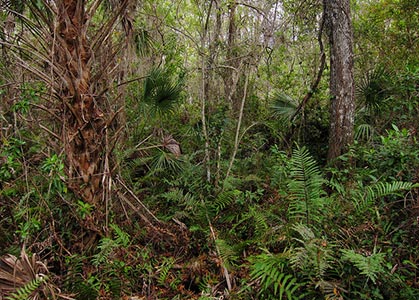 Florida may conjure up images of retirees on beaches and hard-drinking spring-breakers, but with a variety of terrains and a burgeoning race scene, the Sunshine State is also a prime winter destination for vacationing trail runners.

The state’s most expansive natural playground is the Everglades, over 2 million acres of national and state parkland between Miami and Naples. A habitat for deer, alligators, Florida panthers, different species of bird and more varieties of orchid than anywhere else on the continent, the Everglades constitutes a varied landscape of marshes, prairies and hardwood forests.

“You’ll run through the swamps and all of a sudden it’ll open up to this spectacular and unexpected grassland prairie,” says Bob Becker, a Fort Lauderdale race director who organizes the Everglades Ultras. “It’s the real deal.”

>What: A sunny, subtropical runcation with outdoor fun for the whole family.

>When to go: January to March, and February especially, is the temperate interlude between the wet season and the mosquito season, with average highs in the low 80s.

>Things to do: South Florida is water-sports central; non-running visitors can fish, kayak through mangrove forests and take guided boat tours of the area. Becker says some runners base their Florida vacations around a destination race followed by a week-long cruise. Culture enthusiasts can head to art and photography galleries that display work centered on the Everglades.

The Camillia Street Grill, says Becker, is unquestionably “the best restaurant in Evergaldes City,” offering “great and unexpected food” on the water for a moderate price. A short distance northeast on Route 41, Joanie’s Blue Crab Cafe is another good option.

Everglades City has several locally owned hotels, including the Ivey House Bed & Breakfast and the historic Rod and Gun Club.

In the vast Everglades National Park, runners can string together trail runs on various hiking and biking trails, mostly in the eastern half of the park, closer to Miami. In the Long Pine Key area, the Pineland Trails form a 43-mile network of paved and unpaved trails open to foot traffic and bicycles. The doubletrack Old Ingraham Highway offers an up to 20-mile out-and-back through grasslands and cypress. On Flamingo Island, several short and medium-length trails run along or near the coast.

>Destination Race: In the Everglades region, the Everglades Ultras 50 Mile, 50K, and 25K, are held each February in Fakahatchee Strand Preserve State Park. Trail races, from 5Ks to 200-mile relays, are cropping up across the entire state; see Trail Runner‘s race calendar for more Florida races.

Big Bend National Park sees 300,000 visitors a year, but never feels crowded. The national park and its lesser-known neighbor, Big Bend Ranch State Park, sprawl across 1.1 million acres. “It’s so quiet, you can hear yourself breathing, hear every footstep,” says Carroll Voss, director of Overland Race Management, which organizes the Big Bend 50-Mile Ultra Run. Plus, the dark sky is magnificent: “At night you’ve got stars from horizon to horizon,” he says.

>What: Solitude, stargazing and a unique desert environment far from civilization.

>When: December and January are peak running weather, with cool, dry, sunny days.

>Things to do: For outdoor adventures in Big Bend that won’t trash your quads, Angell Expeditions organizes Jeep tours, hikes, river trips and other options for exploring the park and surrounding area.

Marfa and Alpine, respectively 70 and 90 miles from the national park, offer a thriving arts and culture scene. The Judd Foundation in Marfa exhibits the art and workspaces of minimalist installation artist Donald Judd. Alpine and Marfa have a number of museums and galleries, and both towns have frequent cultural offerings. The McDonald Observatory in nearby Fort Davis offers visitors close-up views of the famously dark West Texas night skies.

Big Bend Ranch State Park contains miles of splendid singletrack. The Contrabando Trail System consists of 25 miles of wagon paths and singletrack. For a lollipop loop of 18 to 20 miles, start from the east trailhead across the street from the Barton Warnock Visitor Center and circle the Contrabando Dome. Another good run can be had in the Fresno Creek Drainage.

Big Bend National Park has over 150 miles of trails through deserts, over mountains and along rivers. 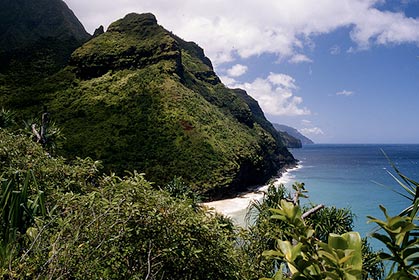 Hawaii’s vivid greenery and volcanic landscape is unlike anything in the contiguous U.S., as viewers of the many productions filmed there can attest. Oahu, the state’s third-largest and most populous island, houses state capital Honolulu as well as idyllic beaches and swaths of mountainous backcountry with miles of rooty, rocky trails, making an ideal base camp from which to explore the rest of the state.

When trail running in Hawaii, “there are almost always great vistas where you can see both the ocean and the mountains,” says Bob McAllaster of the Hawaii Ultra Running Team (H.U.R.T.), which organizes the H.U.R.T 100 Mile Trail Race on Oahu each January. Oahu also offers a friendly and growing trail-running community, year-round running weather and bear- and snake-free trails.

>What: Extraordinary scenery and lush, rugged mountain trails close to beaches and the city, with more remote trails on other islands.

>When: With average highs in the 80s year-round, any time is running time in Hawaii. The winter months are slightly cooler, but also wetter, than the summer months. Whatever the season, carry plenty of water: the heat and humidity can be brutal for unaccustomed runners.

>Things to do: Honolulu is a major city that offers cultural attractions and historical sites, fine dining and nightlife as well as world-class beaches. Outdoor recreation options, including hiking, biking, kayaking, snorkeling and surfing, abound on Oahu and the other islands. Fans of Lost can also tour locations where memorable scenes from the TV show were shot.

The Makiki/Tantalus Trail System, where the H.U.R.T. 100 is held, features a number of short, interconnected trails on and around jungle-covered Tantalus Mountain, adjacent to Honolulu; the trails can be linked up for runs of eight miles or longer.

A short drive northeast of Honolulu, the 11-mile point-to-point Maunawili Trail from Pali Lookout to Waimanalo offers varied terrain and splendid views of the windward side of Oahu. Sections of the trail can get extremely muddy in the winter.

Venturing further afield, there’s no shortage of trails on the rest of Oahu or the other islands. One highlight is the Kalalau Trail, a difficult 11-mile point-to-point through the steep valleys along the coast of Kauai Island, passing seaside cliffs, waterfalls and historic ruins along the way.

>Destination Race: January’s H.U.R.T 100 Mile Trail Race and December’s XTerra Trail Run World Championships, with half marathon, 10K and 5K distances, are both on Oahu Island. Both races fill up well in advance. 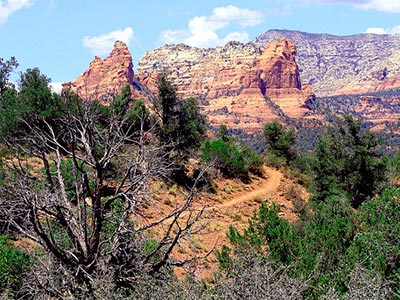 About 30 miles south of Flagstaff, Sedona sits at 4,500 feet in the middle of some 6 million acres of National Forest lands. Sedona is known for its red sandstone cliffscape, but the surrounding forestlands also include peaks, canyons, pine forests and high desert scrub.

Not that visitors need to venture far from Sedona for memorable trail-running adventures. “Most visitors can leave any hotel and be at a trailhead within a few miles,” says Lindsay Scheiwiller, co-owner of the Sedona Running Company. “Sedona has 200+ miles of trail and only a few roads.”

>What: A mountain-biking mecca with 200 miles of runnable singletrack and spectacular rock formations.

>When to go: November through March promise daytime highs in the high 50s and 60s, mostly sunny days and the occasional dusting of snow on the red rocks.

>Things to do: Mountain biking, hiking, jeep tours and other outdoor pursuits. The Grand Canyon and the Mogollon Rim, the Colorado Plateau’s abrupt southern terminus, are both within day trip distance.

>Post-adventure recovery: Famous Pizza & Beer offers “mountain biker tested; runner approved” pizza and craft beer, says Gifford of the Sedona Running Company; delicious wood-fired pizza can be had at Pisa Lisa. As for lodging, if you’re looking to spoil yourself, check into L’Auberge de Sedona Resort & Spa on the banks of Oak Creek; the Sugar Loaf Lodge and local Super 8 are cheaper options.

The 8.5-mile Hangover Loop starts at Huckaby Trailhead on Schnebly Hill Road and connects the Munds Wagon Trail, Cowpies Trail and Hangover Trail. Run on technical singletrack and slickrock, the route includes steep climbs and exposed cliffside trails with views of the canyon below.

There are a number of trails around Mescal Mountain. Gifford’s recommended Mescal Mountain Loop—which can be 5-10 miles depending on the route—starts at the Dry Creek Vista Trailhead and uses the Chuckwagon Trail, Mescal Trail, Deadman’s Pass and Long Canyon Trail; an out-and-back to Devil’s Bridge, a 70-foot high natural (and runnable!) bridge, can also be added.

For the inside scoop, stop by the Sedona Running Company and ask after Earl’s Loop, a mysterious “local favorite that isn’t on any map,” according to Gifford. (No promises they’ll tell you: “You gotta know a guy who knows a guy to get the beta on this loop,” he says.)

>Destination Race: The Sedona Marathon in January is run on a combination of paved and dirt roads. 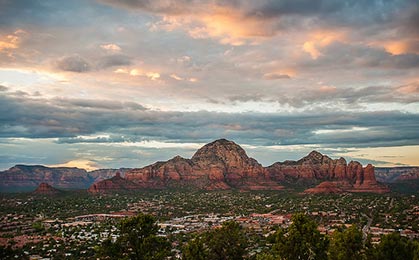